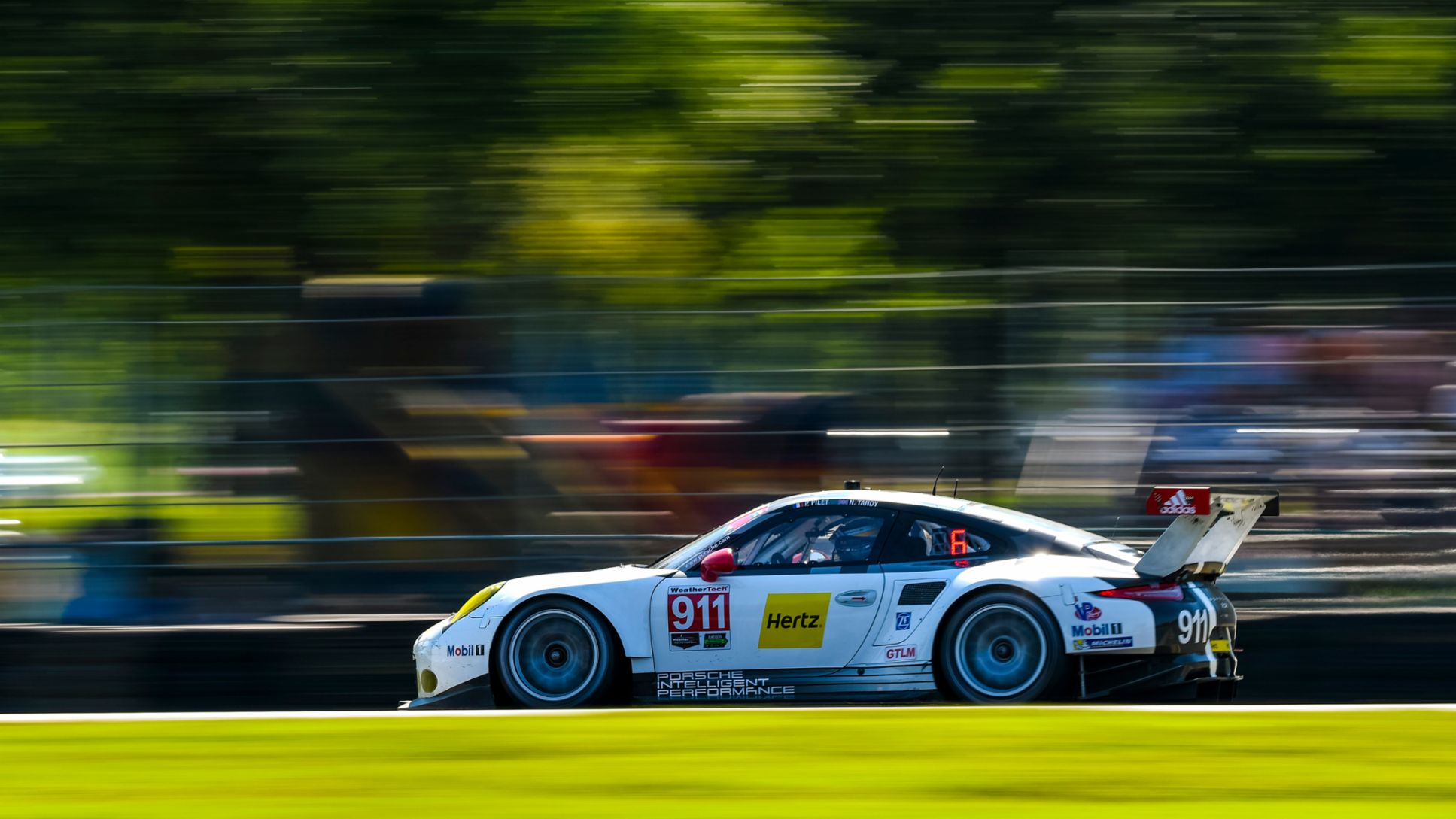 The tenth and penultimate round of the IMSA SportsCar Championship will be contested on the Grand Prix circuit on 17 September with the Porsche North America works team fielding a pair of 911 RSR.

Sports car fans can again expect an unforgettable motorsport experience. Also contested on this weekend in the capital of Texas in addition to the most important sports car racing series in the USA and Canada is the WEC Sports Car World Endurance Championship, the Porsche GT3 Cup Challenge as well as the SportsCar Challenge. Spectators can enjoy five races with around 45 Porsche racing vehicles including the 911 RSR, 911 GT3 R, 911 GT3 Cup, Cayman GT4 Clubsport as well as 919 Hybrid models.

This marks the third time for the IMSA SportsCar Championship at the Circuit of the Americas. The Formula 1 racetrack with its distinctive observation tower is located in the hills not far from downtown Austin. The racetrack is part of a modern entertainment complex, which also hosts other sporting competitions and concerts.

Tackling the IMSA SportsCar Championship are the Porsche 911 RSR and the Porsche 911 GT3 R. After securing victories at the long distance classics in Le Mans, Daytona and Sebring as well as numerous championship titles, the 911 RSR has become the most successful GT racing car of recent years. The 911 RSR is based on the seventh generation of the iconic 911 sports car, with 2016 marking its last season of racing as a works car. Its successor is expected to make its race debut in January 2017 at the Daytona 24-hour race. Porsche built the Porsche 911 GT3 R for GT3 series worldwide based on the 911 GT3 RS production sports car. The new customer racer scored its first victory in the IMSA SportsCar Championship at Laguna Seca.

The Austin round of the IMSA SportsCar Championship takes off on Saturday, 17 August, at 11:35 hrs local time (18:35 hrs CEST) and runs over 2:40 hours. The race can be viewed live outside the USA on www.imsa.com.

Dr Frank-Steffen Walliser, Head of Porsche Motorsport: “Austin has always been one of the highlights of the season for Porsche. With the IMSA SportsCar Championship, the Sports Car World Endurance Championship WEC, the SportsCar Challenge and the Porsche GT3 Cup Challenge, four top-class racing series will hold championship rounds in the capital of Texas. On this weekend, many Porsche fans will be treated to a very special motorsport experience, after all, it’s not every day that you can admire almost the entire range of Porsche’s racing cars at one race event. After a brief dry spell, we were back on the podium recently in Virginia and now we aim to build on this performance in Texas. The Circuit of the Americas is a fantastic, extremely demanding circuit and hence a real challenge for all of our drivers and teams – regardless of which championship they contest.”

Patrick Pilet (911 RSR #911): “The Circuit of the Americas is one of my favourite racetracks in the USA. But a victory there is still missing from my collection. We got very close to winning last year, but while we were in the lead we had to pit briefly two laps before the finish. I hope we can do better this time. Our chances look good, because Austin has traditionally been good turf for us.”

Nick Tandy (911 RSR #911): “I always particularly look forward to Austin. Part of the reason for this is the demanding racetrack – I especially enjoy the first fast sector. But the city has a very special flair and it’s always worth a visit. As for the race, we have a score to settle. This year I hope that we can bring home the victory that we lost last year just a few kilometres from the finish line.”

Earl Bamber (911 RSR #912): “I have great memories of Austin. In 2014 I won the Porsche Mobil 1 Supercup title there, and we were also looking good last year with the 911 RSR. Austin is one of my favourite American cities. Since the Circuit of the Americas also hosts a round of the WEC, I’ll be able to catch up with many Porsche teammates and old friends. I’m really looking forward to that.”

Frédéric Makowiecki (911 RSR #912): “Finally I get to go racing on a familiar US racetrack. The Circuit of the Americas has an interesting layout and I’m very confident that we can match the pace of the frontrunners. We should be able to make the most of the 911 RSR’s traction advantages, especially in the slow corners. The most important thing will be to find the optimal balance for our car during the practice session.

Jörg Bergmeister (911 GT3 R #73): “After skipping the race in Virginia I’m now looking forward to Austin. The Circuit of the Americas is a very modern racetrack, but it’s still a lot of fun to drive there. I hope that we can repeat our result from Elkhart Lake where we secured second place.”