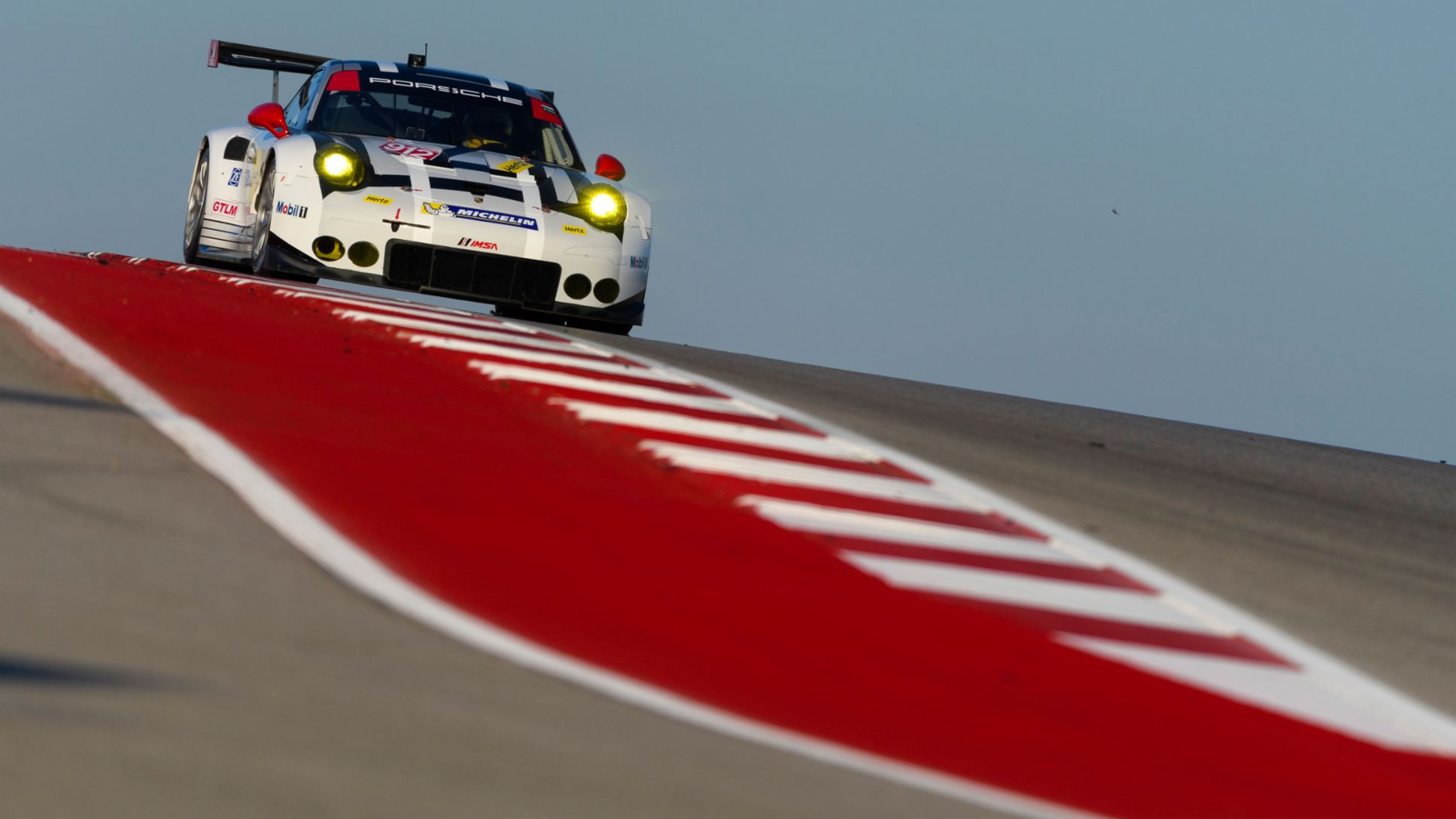 The Petit Le Mans race not only signifies the end of an exciting racing season. The finale of the IMSA SportsCar Championship also marks the end of an era: The race will be the last one of the Porsche 911 RSR in its current configuration.

The Petit Le Mans race on the storied Road Atlanta track not only signifies the end of an exciting racing season. The finale of the IMSA SportsCar Championship also marks the end of an era: For the Porsche 911 RSR in its current configuration, the race in Braselton in the US state of Georgia will be its last factory-run event. Its successor is expected to make its race debut in January 2017 at the Daytona 24-hour race. With its historic overall victory on this circuit in 2015 against the more powerful sports prototypes, the most successful GT racer of recent years secured all three GTLM-class titles for Porsche at the most important sports car championship in North America.

At its farewell performance, the 911 RSR, which was developed based on the seventh generation of the iconic 911 sports car, could even win a title: In the prestigious North American Endurance Cup, which encompasses the long distance classics of Daytona, Sebring, Watkins Glen and Petit Le Mans, Porsche is currently tied for the lead with Chevrolet. After the 1-2 victory in Austin, the Porsche North America works squad fields a pair of 911 RSR with the starting numbers 911 and 912 at the last round of the season.

Petit Le Mans was first contested on the 4.087-kilometre racetrack in 1998. With 24 victories, Porsche is the most successful manufacturer at the ten-hour classic on the storied circuit. With its twelve corners, it is regarded as one of the most challenging racing venues in the United States.

In addition to Petit Le Mans, the 911 RSR has won other long-distance classics such as Le Mans, Daytona and Sebring and has also clinched many championship titles. The vehicle was developed in Weissach on the basis of the seventh generation of the iconic 911 sports car. Porsche built Porsche 911 GT3 R for GT3 series worldwide based on the 911 GT3 RS production sports car. The new customer racer scored its first victory in the IMSA SportsCar Championship at Laguna Seca.

The race takes off on 1st October at 11:10 hrs local time (17:10 hrs CEST) and runs over ten hours. The race can be viewed live outside the USA on www.imsa.com.

Dr. Frank-Steffen Walliser, Head of Porsche Motorsport: “Petit Le Mans is a worthy setting for the last race of a season that has treated fans to some enthralling and tough racing. This tradition-steeped and very demanding circuit is always an exciting challenge for teams and drivers. This year we tackle the event feeling somewhat melancholy, because Petit Le Mans marks the last factory-entry of our latest 911 RSR. With 21 victories and eight championship titles won by our factory and customer teams, it’s the most successful GT racer of previous years. At Road Atlanta in 2015 we celebrated an outstanding overall victory under incredibly difficult conditions and in heavy rain. If it meant we would achieve another result like that, we wouldn’t mind if the weather was horrible again this year.”

Patrick Pilet (911 RSR #911): “It’s a very special feeling to return to this racetrack a year after our amazing overall victory. I can still vividly recall that success. It was one of the most wonderful moments of my career. Petit Le Mans is one of the greatest classics in endurance racing, and to contest a ten-hour event at the end of a tough season is a huge challenge for every race driver. The weather is unpredictable at this time of the year. When it rains, it’s heavy and persistent. All in all I’m looking forward to it. We’ve experienced a difficult season and it would be fantastic if we could end it with a victory.”

Nick Tandy (911 RSR #911): “Petit Le Mans is the first major race that I won as a Porsche works driver. That was in 2013. So it’s always been a very special race for me, not least because of our sensational double victory there last year. We’ve had a tough time this season. Many things didn’t quite work out as we would’ve hoped for. But it has always been our aim to perform strongly again at Road Atlanta. I hope we manage this.”

Richard Lietz (911 RSR #911): “Road Atlanta will definitely be an exciting race. I’m looking forward to supporting Patrick and Nick as the third driver. In the past they’ve always welcomed me with open arms.”

Earl Bamber (911 RSR #912): “The last few years have underlined that Road Atlanta is a racetrack that suits the 911 RSR. After all the successes, we now hope of course that we’ll achieve a good result again this time. Our goal is clear: we want to secure the fourth straight win for Porsche and to win the North American Endurance Cup.”

Frédéric Makowiecki (911 RSR #912): “Petit Le Mans is one of the greatest races in the USA. Porsche’s overall victory last year was a real highlight. We refused to give up this season and we were rewarded with a win in Austin. Now we’re heading to Petit Le Mans more motivated than ever. We want to end this difficult season with a good result – if everything comes together well, with a win.”

Michael Christensen (911 RSR #912): “I’m looking forward to racing again in America. Petit Le Mans is always spectacular. It’s the last race of the season so everyone is determined to show just how good they are. And then there is the weather, which is always good for a surprise. All in all, it’s a very intense race on a great racetrack.”

Jörg Bergmeister (911 GT3 R #73): “Petit Le Mans is our last chance of the year to bring home a victory. We’ve done tests there and they were really good. We’ll do our very best to bring the debut season of the 911 GT3 R to a successful close. Road Atlanta is a great track, it’s very challenging and a worthy venue for a season finale.”