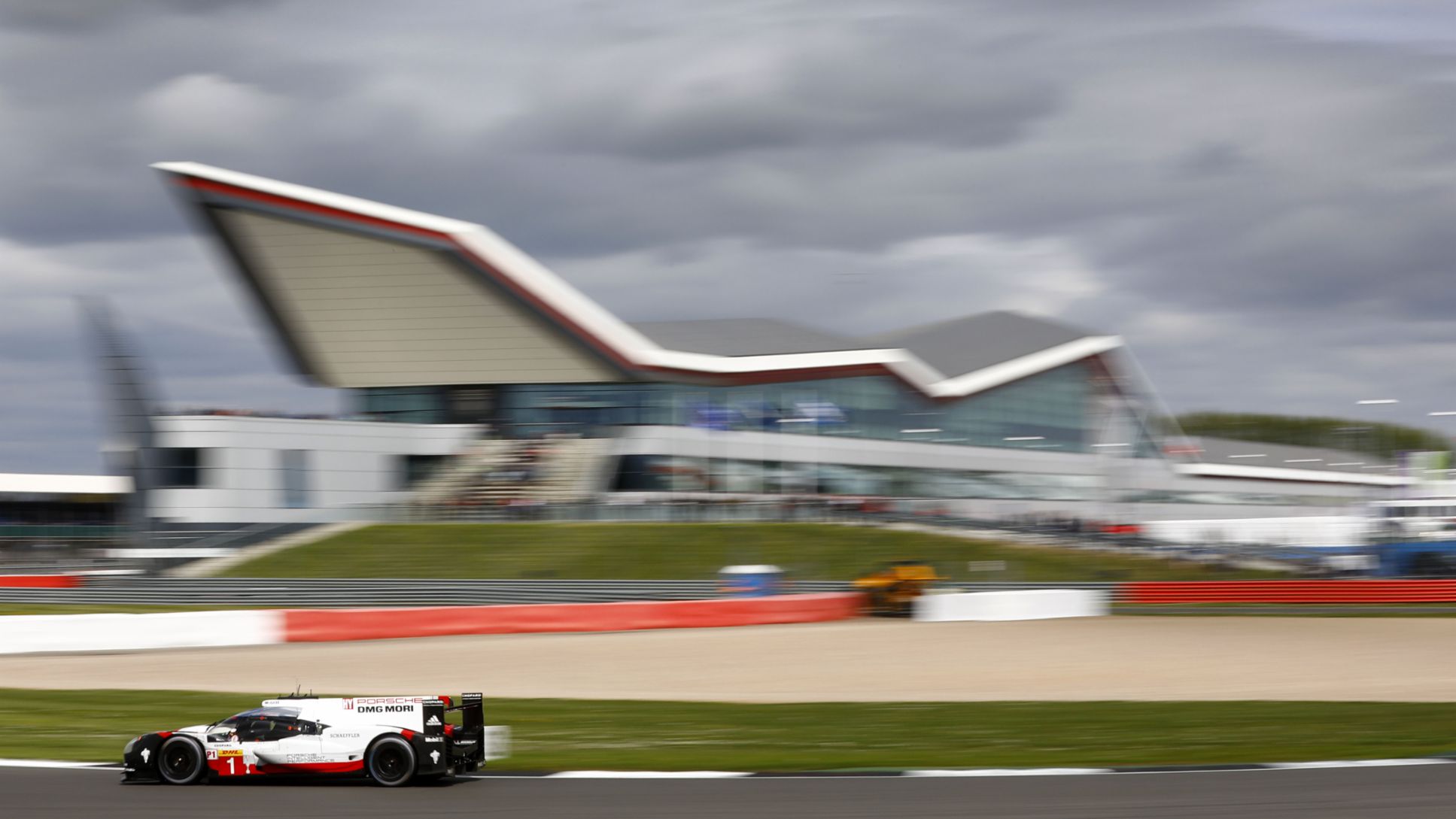 Despite a well calculated but significant aerodynamic disadvantage, Porsche fought for the victory with the 919 Hybrid on Sunday in Silverstone. Richard Lietz and Frédéric Makowiecki planted the 911 RSR with the starting number 91 on the third grid spot in the GTE-Pro class.

The first race of the 2017 WEC was accompanied by typical cool and changeable British weather with rather low ambient and track temperatures of around 11 degrees Celsius and occasional light rain. However, this did not hamper the atmosphere with 50,200 fans attending over the weekend. The Porsche LMP Team – Le Mans winner and world champion in 2015 as well as in 2016 – leads the manufacturers’ classification after the first of nine championship rounds on 33 points with Toyota second (26.5). In the drivers’ standings, the Porsche crews are currently second and third.

How the race went for car number 1:
Jani starts three on the 27-car grid but slips behind the sister car in the first part of the opening lap. He pits after 28 laps for fuel only and continues in P4. At the second regular pit stop (fuel and tyres) after 57 laps, Tandy takes over and resumes in P4. He is up to third on lap 64 ahead of Toyota #7 which appears to have an issue. After 86 laps, Tandy comes in for fuel only and afterwards attacks the #8 Toyota. When rain sets in, Tandy stops again only three laps later (after 89 laps) and takes intermediate tyres. Having completed 98 laps, Tandy hands over to Lotterer who continues on slicks in P3 behind the leading #8 Toyota and the #2 sister Porsche. On lap 117, the #7 Toyota crashes causing a safety car period that Lotterer uses for refuelling. With 141 race laps completed, the tyre performance has dropped significantly and the team decide to stop early and let Tandy take over again. At his final stop for fuel after 171 laps, the Brit only changes the two left hand tyres – used ones from qualifying and comes home third.

How the race went for car number 2:
Hartley moves up from his fourth place start to third in the opening corners on the first lap. At the end of lap 29 he refuels and resumes in P3, consistently matching the Toyota lap times. After 59 laps, Hartley hands over to Bernhard, the German rejoining second and now ahead of Toyota #7. After 87 laps, Bernhard initially comes in for fuel only but on short notice, has intermediate tyres fitted. He rejoins the race in P2. Bamber jumps into the car 99 laps into the race, the car now on slicks again and continues in P2. During the safety car period triggered by the #7 Toyota crash, Bamber comes in for refuelling after 117 laps. On 149 laps, Hartley takes over again to chase the leading Toyota. When Hartley pits for his final refuelling after 178 laps, he leads the race by almost one minute. This and a perfect service from the pit crew enables the Kiwi to rejoin with a lead of eight seconds. It is still half an hour before the chequered flag and the Toyota not only benefits from better aerodynamics due to the high downforce configuration but also is on fresher tyres. On lap 190 of 197, and in light drizzle, Buemi squeezes himself through on the inside of Hartley’s car to take the race win.

At the Silverstone six-hour race, the new Porsche 911 RSR started its maiden season in the Sports Car World Endurance Championship WEC with a podium result. Richard Lietz (Austria) and Frédéric Makowiecki (France) planted the 911 RSR with the starting number 91 on the third grid spot in the GTE-Pro class on Easter Sunday in front of more than 50,000 spectators. With four automobile manufacturers, this category is the most strongly represented and treated fans to 171 laps of thrills and spills right from the start of the season. For 2017, the completely newly developed 510 hp race car from Weissach is fielded by the Porsche GT Team in the WEC as well as the IMSA SportsCar Championship in the USA and Canada.

Twenty-seven cars lined up on the Silverstone Circuit to kick off this year’s Sports Car World Endurance Championship WEC. The sky over the storied racetrack in the British Midlands was overcast, a cold wind blew, and light showers fell especially in the second half of the race. However, this dampened neither the spirits of the enthusiastic British motor racing fans on the grandstands nor the pilots, who, instead of switching to wet tyres on the partially wet track, stayed out on slicks and treated the spectators to gripping fights and spectacular overtaking manoeuvres. The Porsche GT Team used the entire qualifying session to prepare for the race and to save the tyres. This season, only four instead of six sets of tyres may be used per race weekend.

This strategy paid off. In the #91 Porsche 911 RSR, Frédéric Makowiecki made up three positions in the first lap; after nine laps he was already running in third. In his slipstream, his works driver colleague Michael Christensen (# 92) turned consistently fast lap times and was within striking distance of the frontrunners. After just half an hour, the Frenchman was in second with the Dane in third. In his pursuit of the leader, Frédéric Makowiecki didn’t let the first drops of rain halt his charge. After 26 laps, he snatched the lead for the first time, which he then had to reclaim again and again over the course of the race. After two hours he handed the 911 RSR off to his teammate Richard Lietz. In the #92 vehicle, Kévin Estre took the wheel and continued to chase down the front group. However, at just over the halfway mark, he had park his 911 RSR with a technical problem.

Frédéric Makowiecki on the other hand seemed unstoppable. When the safety car was deployed a good two hours before the finish, he took over driving duties from Richard Lietz and promptly turned the fastest lap of the race. With one hour and twelve minutes to go, he pulled into the pits as the leader. Even as he pitted for a splash-and-dash fuel stop shortly before the finish he was still running at the top. Since his rivals had already made their final pit stops at this stage, Makowiecki returned to the race action in fourth. Still, with a breathtaking final push in the final laps he managed to snatch third – which everyone had believed to be lost – and made the much hoped for good start into the WEC season.

In the GTE-Am class as well, Porsche had every reason to celebrate. With the 911 RSR campaigned by the customer squad Dempsey Proton Racing, the Porsche Young Professional Matteo Cairoli (Italy) joined forces with his German teammates Christian Ried and Marvin Dienst to claim third place after a dramatic final lap. Matteo Cairoli was also one of the pilots who secured second in the 911 RSR of Proton Competition at the season-opening round of the European Le Mans Series ELMS at Silverstone the day before.

Fritz Enzinger, Vice President LMP1: “This was a thriller for us as well as for the spectators. Due to our consequent decision for the low-downforce aero package, as expected we couldn’t be a threat in qualifying. Therefore, we are even happier about today’s second and third place with such a marginal gap to the winners. Our low downforce aerodynamic package now has its most difficult race behind it. We can very much look forward to the next race at Spa-Francorchamps. The fans there can expect to see even more from us. Thanks a lot to the entire team.”

Andreas Seidl, Team Principal: “Today’s second and third place feels like a race win. I am very proud of every single team member in Weissach and here on site – it is amazing what this team achieved today. Despite the decision to come here with little aerodynamic downforce, both our cars were 100% reliable and very competitive. Additionally, our six drivers have again underlined what a high and balanced level they operate on. Congratulations to Toyota for a well deserved race win.”

Dr Frank-Steffen Walliser, Head of Porsche Motorsport: “That was a great race in the GTE-Pro class; extremely close and with spectacular overtaking manoeuvres. It was a great advertisement for our sport. The spectators were truly given their money’s worth. Strategically, it was a very tough race, which was made even more interesting by the caution phases. It’s a shame that our number 91 contender had to retire with a technical problem, which is as yet unidentified. But basically we have the pace and that makes us confident for the next race. The GTE-Am class was also gripping from start to finish. In the final dramatic lap, our Dempsey Proton Racing customer team also clinched third place, and they were rewarded for their strong team performance.”

Round two of the Sports Car World Endurance Championship is contested on 6 May in Spa-Francorchamps/Belgium.