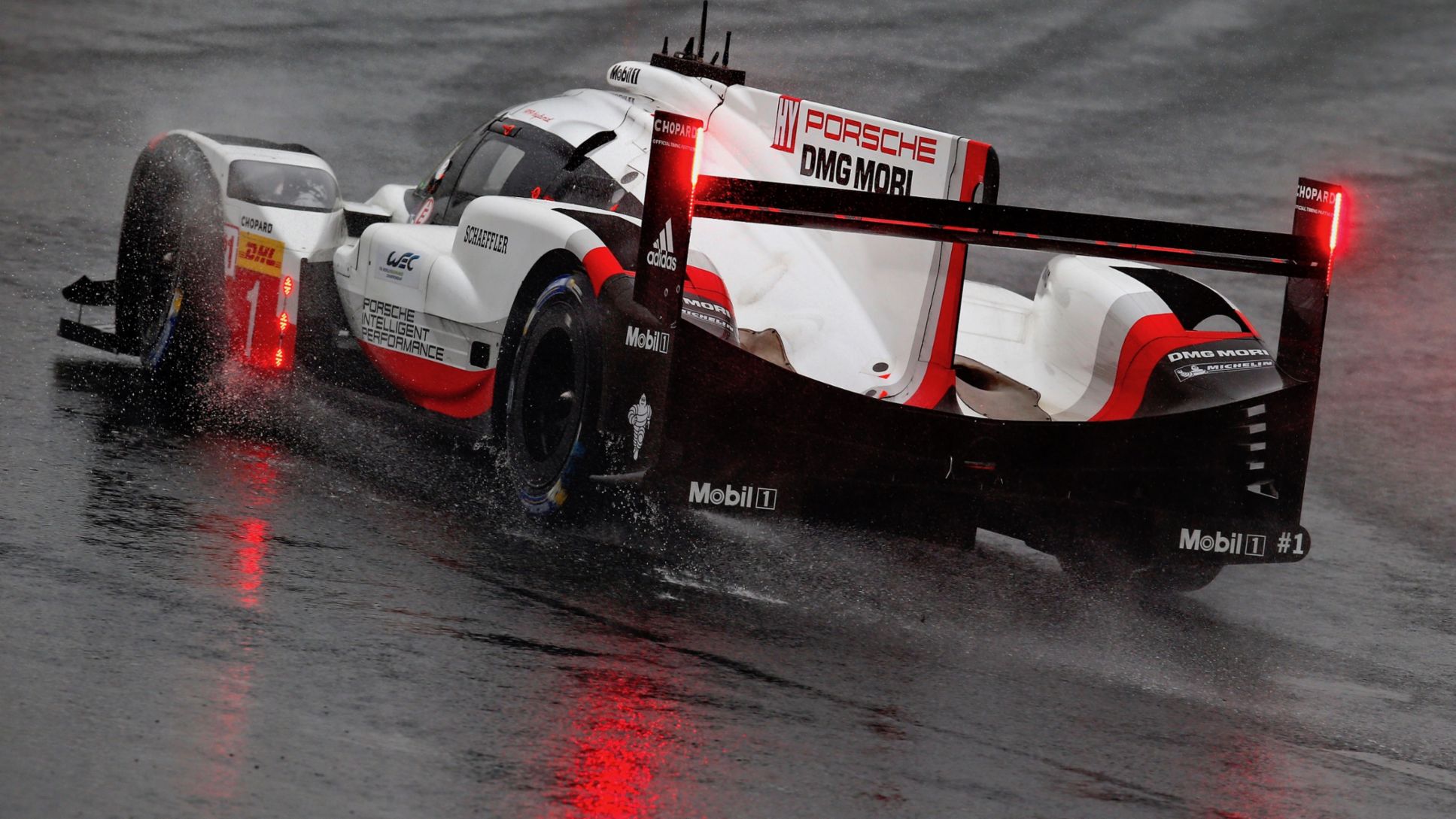 The Porsche LMP Team had to be content with third and fourth place finishes at the seventh of nine rounds of the FIA WEC. The Porsche GT Team scored two podium spots with the Porsche 911 RSR.

The six-hour race on the Fuji International Speedway was hampered by persistent
rain plus fog and staged in only 14 degree Celsius ambient temperature and
16 degree track temperature. Interruptions and neutralisations influenced the track
action. Neel Jani (CH), André Lotterer (DE) and Nick Tandy (GB) finished in third
place. This year’s Le Mans winners Earl Bamber (NZ), Timo Bernhard (DE) and
Brendon Hartley (NZ) had started from pole position and came home fourth with
Bamber impressively recording the fastest race lap (1:37.702 minutes on lap 19 of
115). The second red flag came after four hours and 31 minutes and the race was
not restarted. As just over 75 per cent of the scheduled race duration had been completed, full points were awarded.

In the manufacturers’ world championship standings, Porsche continues to lead with now 270 points, Toyota follows on 211.5 points after their one-two win on home soil. Bamber/Bernhard/Hartley top the drivers’ rankings with 172 points, their advantage over the best placed Toyota drivers having melted to 39 points. Jani/Lotterer/Tandy remain in fourth position now on 98 points. At the eighth and penultimate 2017 WEC race in Shanghai (CN) on November 5th, Porsche wants to convert its match point into a successful title defence.

André Lotterer starts from P2. The safety car leads the pack in the rain until the end of lap 5. On lap 6 Lotterer drops back to fourth behind the two Toyotas. After a touch with the number 8 Toyota (Sébastien Buemi), a flap on the front right is missing. Half an hour into the race, fog is increasing, nevertheless Lotterer is catching up. End of lap 22, he overtakes the Toyota number 7 (Kamui Kobayashi) and now lies third. From lap 29 onwards, the safety-car is on track again. After 33 laps the team calls Lotterer to pit for full service. Neel Jani takes over, getting new front body work and fresh rain tyres. The race is red flagged after 39 laps with Jani in P4. The race is restarted at 12:50 hrs and he moves in to P3 when the sister Porsche pits.

After 60 laps, with the safety car on track again, Nick Tandy takes over and continues with the same set of tyres. On lap 77, when the number 8 Toyota pits, Tandy takes the lead. He is under pressure from José María López who’s at the wheel of the number 7 Toyota. After 79 laps, the safety car is back on track. At the re-start on 87 laps, Tandy defends the lead while instantly an LMP2 accident requires the next safety car period. When the race is released for the next time after 94 laps, Tandy cannot defend against the two Toyotas and drops back to third. The order remains the same after 100 laps at the next pit stop when Jani takes over on fresh tyres. When chasing Mike Conway in the number 7 Toyota, the safety car comes out again on lap 111 due to worsening fog. After 114 laps the race is ultimately red flagged and not re-started.

Earl Bamber performs his first WEC start. When the safety car disappears at the end of lap 5, Bamber stays in the lead. Before the second safety car period begins at the end of lap 28 because of fog, he has built up a gap of over 12 seconds to the number 8 Toyota (Sébastien Buemi). When the race is red flagged after 39 laps, he is the only LMP1 that hasn’t yet refuelled.

At 12:50 hrs the race is restarted and Bamber needs to immediately pit. After 40 laps, Timo Bernhard takes over with fresh rain tyres. He is now fourth behind the two Toyotas and Neel Jani. Bernhard gets lapped by the number 8 Toyota on lap 56 with the latest safety car period coming moments later. After 63 laps, Bernhard hands over to Brendon Hartley who continues with fresh rain tyres behind the safety car in P4 of the LMP1 category. End of lap 65 the safety car releases the field, end of lap 79 it comes back on track and later again after laps 88 and 111 leaving Hartley powerless to unlap himself. When the race is ultimately red flagged after 114 laps, he is in the pits for refuelling.

Fritz Enzinger, Vice President LMP1: “Heavy rain, thick fog, a start behind the
safety car, two red flags and numerous safety car periods and yellow zones: Given
these adverse conditions, we can be glad that nothing serious happened today. In
the end it was a lucky one-two race win for Toyota. But we were close and in Shanghai we will do everything to do the next step in order to defend our championship titles.”

Andreas Seidl, Team Principal: “Congratulations to Toyota for winning in Fuji. The pendulum today swung back and forth several times. Before the first red flag, we were gambling. If it would have been the end of the race, we would have won it with our number 2 car. But with the timing of the ultimate red flag we were unlucky. If the race had continued, we would have seen a battle for victory between the number 7 Toyota and our number 1 car. We generally had difficulties getting the tyres to work at the re-starts causing us to drop back a few times. However, it is important that we take home some more points for both championship classifications. It was a very difficult weekend for our drivers and the entire team but everyone stayed focused which I thank them for.”

Facing rain and fog, Richard Lietz (Austria) and Frédéric Makowiecki (France) secured second place in the strongly represented GTE-Pro class on Sunday after a long time in the lead on the tradition-steeped 4.563-kilometre at the foot of Mount Fuji. Thanks to this result, the two have improved their chances of taking the GT Drivers’ World Championship title. With two races left on the WEC calendar at Shanghai and Bahrain, they currently rank second, just five points shy of the leader. Their teammates, Michael Christensen (Denmark) and Kévin Estre (France), who were robbed of a possible maiden victory for the new 911 RSR in the Sports Car World Endurance Championship WEC when they became the innocent victims of a crash, ultimately finished in third place.

In torrential rain at the Fuji Speedway, with the Holy Mountain hidden behind a
curtain of dark clouds, Patrick Dempsey waved the green flag and sent the 26
starters on their way. In 2015, the Hollywood star had won his first world
championship race in Fuji with his 911 RSR. This time, the Porsche ambassador and co-owner of the Dempsey Proton Racing kept his fingers crossed for his squad at the pit wall. It worked: The Porsche Young Professional Matteo Cairoli (Italy) and his German teammates Christian Ried and Marvin Dienst, who have already notched up two wins so far this season at the Nürburgring and in Mexico, netted another podium place with third in the GTE-Am class. With this, they reclaimed the lead in the overall classification of the FIA Endurance Trophy.

Due to the heavy downpour, the race started behind the safety car, with the field
going green again after five laps. In the GTE-Pro class, Richard Lietz got away
perfectly from pole position, with Michael Christensen following suit in the second
911 RSR: After seven laps he had gained two positions and was running in third.
When the weather turned worse, the safety car was again deployed for almost an
hour, before the race was eventually red-flagged due to bad visibility. The drivers
parked their cars on the finish straight. The restart came after 32 minutes, and after a good two hours, when Richard Lietz pitted for the first time, Michael Christensen moved into the lead.

After 2:20 hours, the stewards of the meeting again decided to send the safety car
out due to poor visibility on the rain-drenched Fuji Speedway. Both 911 RSR came
into the pits for a splash-and-dash refuelling stop before quickly returning to the
racetrack. It was clear already at that point that the race strategy on this day would
play a decisive role. This time the safety car stayed out on the track for 26 minutes. After half the distance, Michael Christensen was in fourth with Richard Lietz in fifth. The Dane had just fought his way up to third place when his charge was again thwarted by another safety car phase. The Porsche GT Team strategists summoned the two 911 RSR into the pits for a driver change. Kévin Estre replaced Michael Christensen in the #92 car, with Frédéric Makowiecki taking the cockpit of the #92 Porsche from Richard Lietz. When the race director gave the rain battle the go-ahead shortly afterwards, Kévin Estre snatched the lead, with Frédéric Makowiecki running third.

The fourth safety-car phase of the season’s most unpredictable race was the first as the result of an accident. The race quickly picked up the pace and the rain eased slightly, but now fog rolled in. This, however, was no excuse for the lapped Ford pilot to ram into the leading Kévin Estre almost without braking and forcing him into a spin. Unsurprisingly, the 911 RSR of the Frenchman sustained damages: The collision affected the aerodynamics at the front as well as the diffuser at the rear. The result ofthis was that not only did the vehicle fall back to third place, but from this point on it lost around a second per lap to the front-runner. The fact that his teammate and compatriot, Frédéric Makowiecki, inherited the lead was only a small consolation. At a later stage, however, Makowiecki lost his top spot in a close overtaking manoeuvre with a Ferrari. From that point on, he continued in second, with Kévin Estre in third.

Thick fog: No restart of the race

When the fog became thicker on the Fuji Speedway and the pilots complained of
worsening visibility, the stewards of the meeting opted for another safety car phase. Thirteen minutes later, the field was halted again with the red flag. This was the last caution phase of this eventful seventh round of the Sports Car World Endurance Championship WEC: With no improvement expected, the race was not restarted.

Alex Stehlig, Programme Manager WEC: “The conditions today were very tricky.
The many safety car phases and red flags made it very difficult for the engineers to
make the right decisions. However, the team worked brilliantly and had interpreted
these interruptions correctly. It was bitter that an already lapped competitor cost our leading #92 car a possible win. The #91 drove a steady race, but directly after the restart it didn’t have the pace for a short time to fend off the Ferrari. Second and third are still great results. We were among the fastest over the entire race weekend. It’s a shame that it wasn’t enough to yield our first win in this world championship.”

Round eight of the Sports Car World Endurance Championship WEC will be contested in Shanghai/China on 5 November.