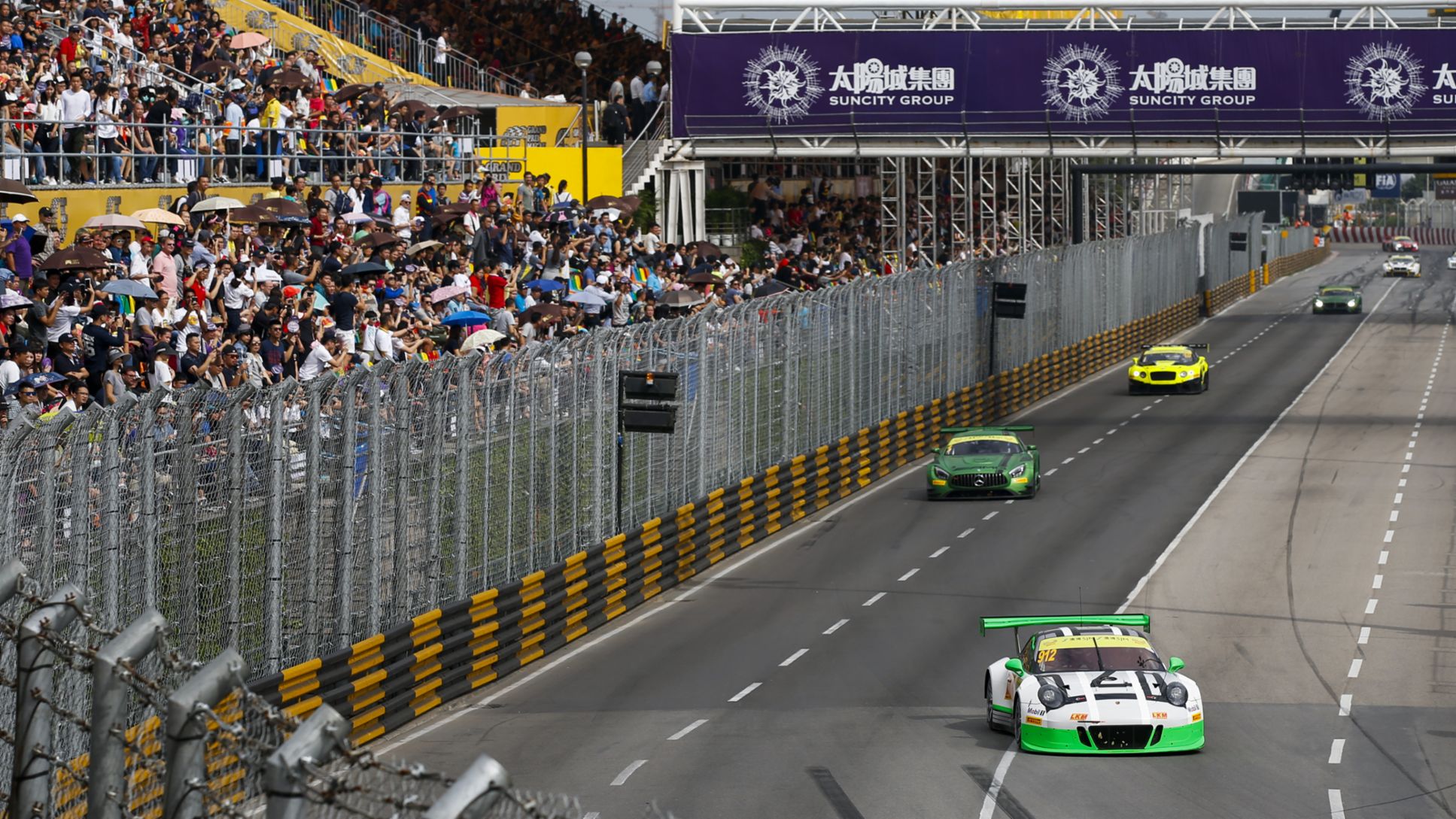 The second place at the FIA GT World Cup in Macau has gone to Kévin Estre in the Porsche 911 GT3 R. Earl Bamber has been handed a five-second penalty after the start. He has been classified fourth.

When the race for the FIA GT World Cup in Macau was stopped and not restarted, the New Zealander Earl Bamber was in the lead at the wheel of the Porsche 911 GT3 R. However, the stewards of the meeting awarded the prestigious win on the legendary city circuit in the former Portuguese colony to Belgium’s Laurens Vanthoor – the very driver who had just been overtaken by the Porsche in a sensational manoeuvre, and had caused the race to be called off after his serious accident. Second place went to Kévin Estre (France) in the second 911 GT3 R. Earl Bamber, who was handed a five-second penalty after the start, was classified fourth.

There was much confusion amongst the fans in the packed grandstands along the 6.115-kilometre racetrack. They had come to experience the world’s most spectacular city race, but the fascinating sports cars of the seven competing automobile manufacturers turned very few laps at race speed and instead spent most of the time waiting in the pit lane. And then the car that ended the race sliding along on its roof was declared the winner. Causing even more bewilderment amongst fans was the guessing game of who had now actually won the race.

Earl Bamber was leading before the race was ended

What was clear at this time, however, was who was leading prior to the final red-flagging of the race – and that was Earl Bamber. At the wheel of the 500 hp customer sports racer, which was designed for worldwide GT3 series on the basis of the 911 GT3 RS production sports car, Bamber had posted second in the qualification race and had taken up the race from the first grid row. But after just four laps, the race for the FIA GT World Cup was halted for the first time after an accident. When the race continued after a long break for repairs to the guardrails, only a good 15 minutes were left on the clock.

At the restart, Earl Bamber put in a brilliant overtaking manoeuvre to sweep past the leading Laurens Vanthoor, who shortly afterwards made an error which caused his Audi to flip onto its roof. This handed Kévin Estre second place. Again, the race had to be interrupted. While drivers in the pits and the fans in grandstands waited for the race to restart, the officials announced that the event would be terminated. In accordance with the regulations, to determine the result of the race, the classification of the lap before the halting of the race was applied.

Dr. Frank-Steffen Walliser, Head of Porsche Motorsport: “Nobody will forget this race in a hurry. We saw a clear result on the track. Earl fought hard for the lead spot with a sensational overtaking manoeuvre, it all went without a hitch, without any cars touching. The accident with the Audi unfortunately led to the race being stopped. Our drivers and the team put in an extremely strong performance in Macau, but they haven’t been rewarded with the well-earned result. We have won everyone’s hearts, but in the face of such bitter moments, this is poor consolation.”

Kévin Estre (911 GT3 R #912): “I was looking forward to an exciting race and I thought I had good chances. Our 911 GT3 R was perfectly setup. Unfortunately it didn’t work out as I’d expected. It’s a shame that we couldn’t offer the enthusiastic fans a better show. I hope that I can come back to Macau sometime and fight for victory.”

The race in the former Portuguese colony, located 65 kilometres west of Hong Kong, is one of the world’s most spectacular motorsport events. The 6.115-­kilometre race-­track featuring a combination of fast straights and very tight corners, places extremely high demands on pilots. The first automobile race in Macau was contested in 1954. Thanks to tourism and gambling, Macau, which was handed back to China in 1999, has become one of the richest regions in the world.

The New Zealander Earl Bamber, who clinched overall victory at Le Mans for Por­ sche in 2015, feels totally at home on the racetracks of Asia. In 2013 and 2014 he contested the Carrera Cup Asia series, he lived for a long time in Kuala Lumpur and now lives in Beijing. He raced in Macau for the first time in 2013. His factory driver teammate Kévin Estre (France) won the 2013 Porsche Carrera Cup Deutschland and celebrated his Macau premiere in 2015. This season he secured four race wins with the 911 GT3 R in the ADAC GT Masters.

The customer sport racer was designed in Weissach for worldwide GT3 series on the basis of the 911 GT3 RS production sports car and contests its maiden race season in 2016. In developing the 911 GT3 R, the engineers placed particular emphasis on light- weight design, better aerodynamic efficiency, a reduction in fuel consumption and improved driveability. Its maiden race outing featuring the new, ultra-modern four-litre flat-six engine with direct fuel injection was in January 2016 at the Daytona 24-hour race. In its debut season, the 911 GT3 R celebrated many successes in international racing series, including the IMSA SportsCar Championship, the World Challenge as well as the Nürburgring VLN Long Distance Championship on the demanding Nordschleife.

The last factory outing for the Porsche 911 GT3 R this season is the twelve-hour race in Sepang/Malaysia on 10 December.