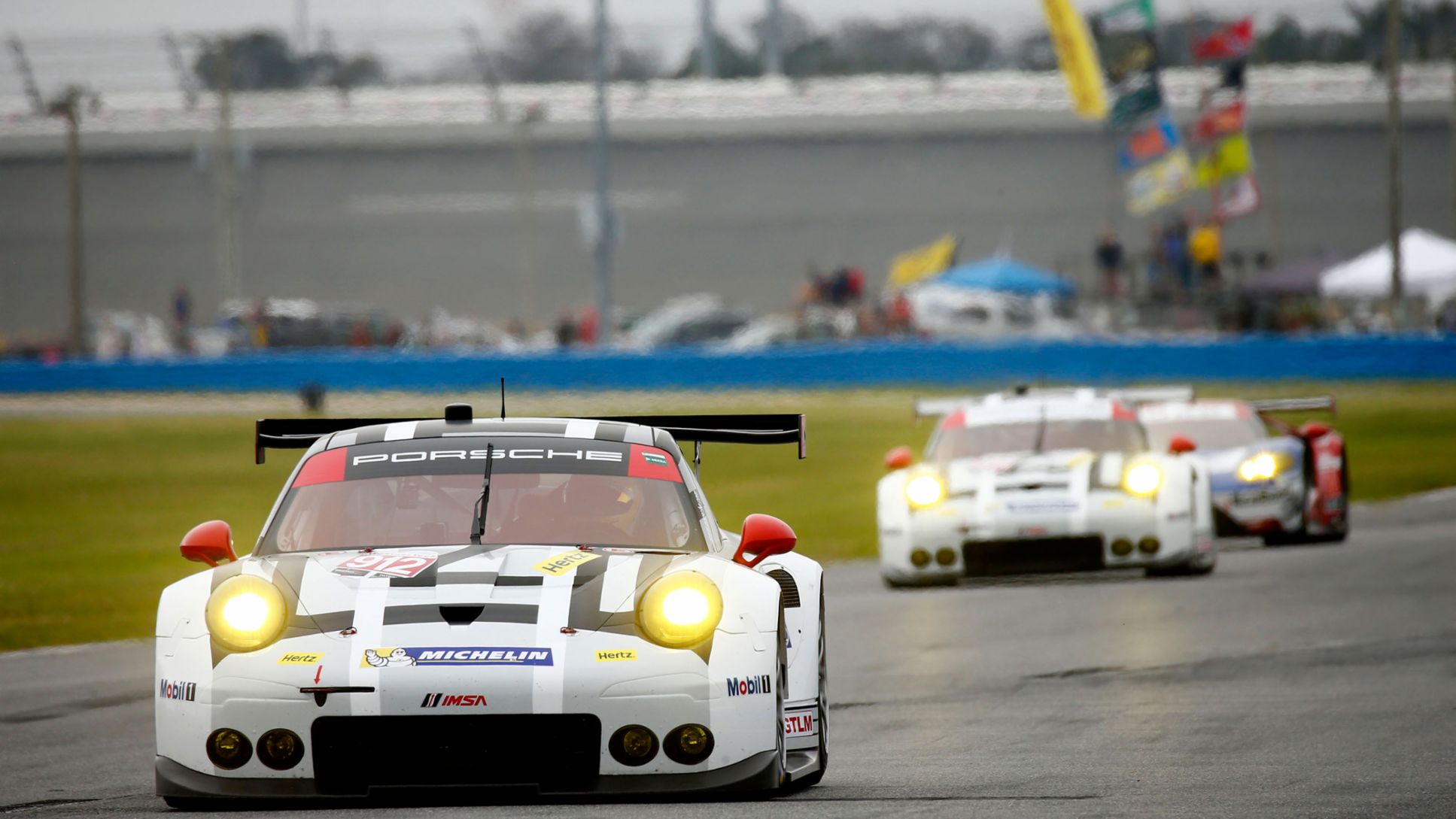 The countdown to the 24 Hours of Daytona is on. At the official “The Roar before the Rolex 24” tests, Porsche teams used the weekend to setup the new 911 RSR and the new 911 GT3 R for the long distance classic in Florida.

The race on the Daytona International Speedway on 30-31 January is the traditional season-opener of the IMSA SportsCar Championship. The two 911 RSR fielded by the Porsche North America works team covered a total of 2,672 test kilometres on the legendary racetrack, which consists of fast banked turns and a tight and twisty infield. Porsche tackles the most important sports car championship on the North American continent as the reigning champions in the GTLM class. New regulations have been introduced for 2016 for the 911 RSR as well as the 911 GT3 R in the GTD class. In total, nine Porsche factory pilots and one Porsche Junior tested at Daytona.

Under changeable weather conditions with morning fog, light drizzle and sunshine with temperatures reaching 25-degrees Celsius, many fans came to watch the test outing of the new racing cars from Weissach from Friday to Sunday. Saturday morning, fog shrouded the storied racetrack, resulting in a delayed and shortened first training session of the day. As temperatures climbed to 23 degrees Celsius and the sun began to break through, teams were able to continue with their test programme from the previous day. Crewing the 911 Porsche 911 RSR was the reigning GT champion, Patrick Pilet (France), as well as his compatriot Kévin Estre and Britain’s Nick Tandy.

The 911 RSR in its new factory finish underwent modifications, particularly to the aerodynamics. The position of the rear wing was moved further to the back, and the rear diffuser is now considerably larger. Moreover, the 470 hp 911 RSR, which was developed on the basis of the seventh generation of the iconic 911 sports car, received a modified front spoiler lip as well as very wide side sills. The new 911 GT3 R, which will be campaigned by customer teams, was run at Daytona for the first time with the new ultra-modern four-litre flat-six engine with direct fuel injection. Porsche built the 500 hp racing car, based on the 911 GT3 RS production sports car, for GT3 series worldwide.

In developing the vehicle, the engineers at Weissach paid special attention to lightweight design, better aerodynamic efficiency, reducing consumption as well as improved handling. In addition, the safety features underwent further optimisation and the costs of servicing and spare parts are now lower for competing teams. From its 911 RSR big brother, the GT3 R has adopted the concept of the centrally-positioned radiator. By eliminating the side radiators, the position of the centre of gravity was improved, the venting of hot air through louvers in the front cover was enhanced, and the radiator is better protected against collision damage.

At the wheel of the 911 RSR with the starting number 911, Patrick Pilet (France), the reigning IMSA GT champion, as well as his compatriot Kévin Estre and Nick Tandy (Great Britain) covered 1,229 test kilometres on the Daytona International Speedway. Their team colleagues Earl Bamber (New Zealand), Frédéric Makowiecki (France) and Michael Christensen (Denmark) clocked up 1,443 kilometres in the second 911 RSR with the number 912. They not only contest the Daytona 24 Hours in this configuration, but also two other long distance races on the IMSA SportsCar Championship calendar – the Sebring 12-hour race and Petit Le Mans on the legendary Road Atlanta racetrack.

Marco Ujhasi, Overall Project Leader GT Works Motorsport: “These three days of testing ran successfully. The programme that we’d set ourselves ranged from qualifying preparations to long runs. We were able to work through our schedule without the slightest technical problem. Everything ran as expected and we feel well prepared for the race. As far as we’re concerned, we could race tomorrow.”

Sascha Pilz, Head of GT Customer Motorsport: “Our customer teams made perfect use of the test days with the new 911 GT3 R. Their fast lap times and the positive feedback that we’ve received are proof of this. The squads and the drivers familiarised themselves with the new vehicle quickly and made great progress in setting up the car. We leave Daytona feeling very confident and we’re looking forward to the race and the new season, which promises some great racing and a lot of gripping action.”

Nick Tandy (Porsche 911 RSR, No. 911): “It’s very exciting to work on the new 911 RSR at this stage. We have new parts in the car that we’ve already tested elsewhere, but at Daytona we worked on specifics for this track. We especially wanted to find out how the aero performance of the 911 RSR changes with the new parts. Daytona is very special. We compete here with less downforce than on any other American racetrack, hence we don’t a lot for the rest of the season. And still, the aerodynamics was one of the big strengths of the 911 RSR in the championship winning year of 2015. For this reason, it helps if we can take what we learned from last year’s campaign and add the experiences we are gaining here.”

Michael Christensen (Porsche 911 RSR, No. 912): “The tests were good. We were able to do things that we had planned. It was important for us drivers and the whole team to get back into the rhythm of work after the break. We are aware that the conditions will be slightly different when we return here in three weeks. But I think we’re well prepared.”

Earl Bamber (Porsche 911 RSR, No. 912): “This test was great fun. I was pleased to be back in the 911 RSR. The winter break was very short, but for me it was still too long. I take my hat off to the engineers at Weissach: Using various modifications, they have adapted the 911 RSR to the new regulations and given us a really good car. Our lap times improved markedly over the three days. That’s a good sign and it makes me very confident for the race.”

Patrick Long (Porsche 911 GT3 R, No. 540): “The new 911 GT3 R is a big step forward. Above all, it’s very stable and doesn’t react as sensitively to the many bumps. When you work with such a new car you make quick progress, because early on you iron out all the big stuff, and then you turn to the details. The aerodynamics of the new 911 GT3 R are very convincing. That gives you a lot of confidence in high-speed corners like Turn 4 or the chicane before the finish straight. The car is also good on the straights and under braking and this is very important at Daytona. We’ve sorted everything out in this test and I’m certain that we will be perfectly prepared to tackle the race.”

Wolf Henzler (Porsche 911 GT3 R, No. 23): “It’s a very new and positive experience for me to drive with ABS. It’s a great help if you miss your braking point. The wheels don’t lock up and make you skid, you always manage a good and safe turn-in. Two years ago I drove a 911 GT3 Cup at Daytona. Compared to that, the 911 GT3 R is a big step forward. It has a totally different level of road-holding, the car stays nice and stable even over the bumps and kerbs. ABS helps me as a professional, and, of course, it’s particularly helpful for amateurs. In addition, the car features a well set-up and sophisticated traction control. This preserves the tyres and makes accelerating out of the slow corners much more comfortable.”