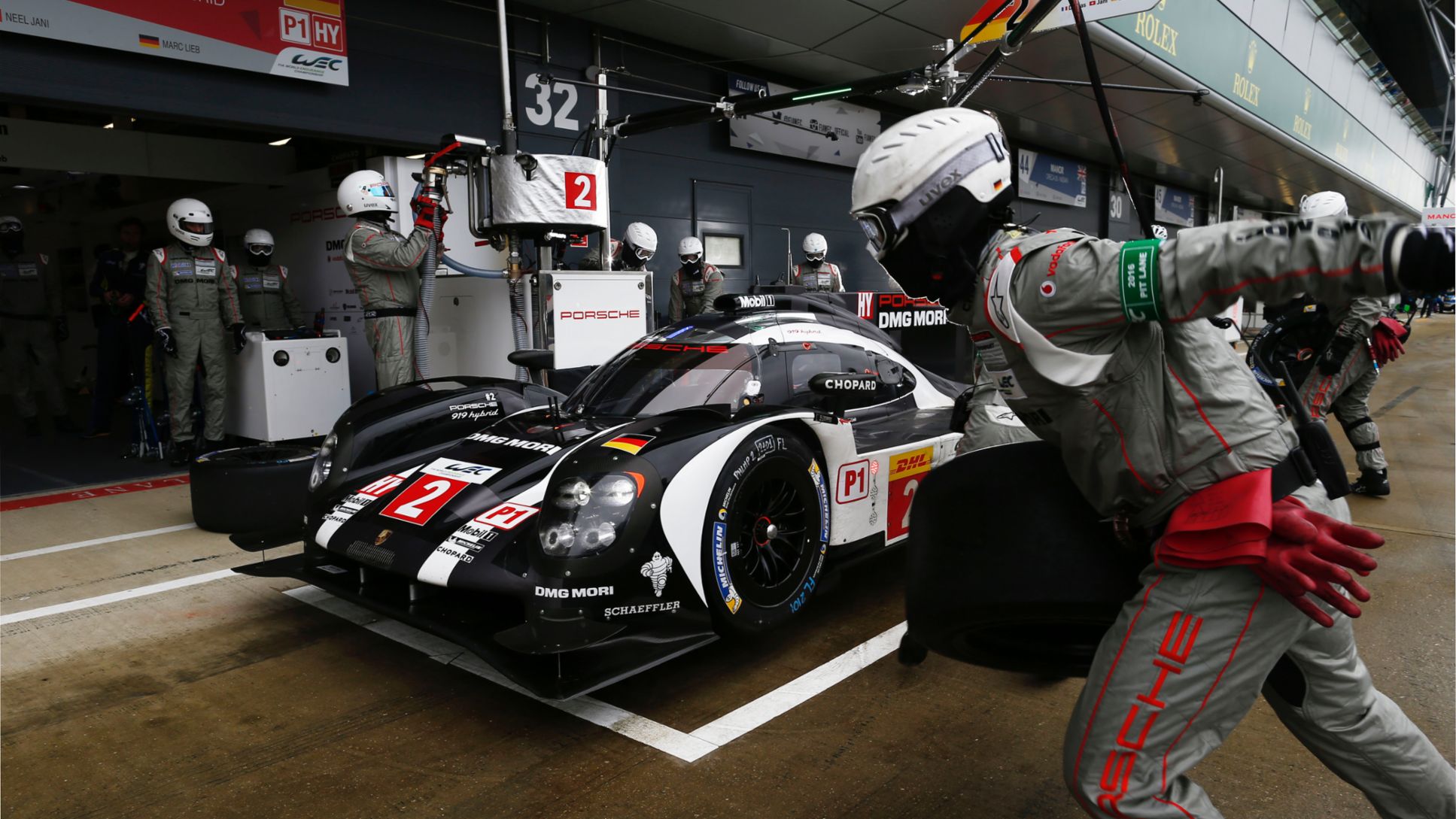 The Porsche Team with its two 919 Hybrid cars has set the fastest lap times on the first day of free practice for the opening round of the FIA WEC in Silverstone, and were also faster than the times from these sessions in 2015.

The training in the LMP1 class at a glance

For the first time the team is going to the 5.9 kilometre long Formula One circuit with a high downforce aerodynamic package for the fast corners. In the team’s debut season in 2014, as well as in 2015, the focus at this time of the year had been on preparing for the Le Mans 24 Hours, where low downforce is required. For 2016 the WEC regulations stipulate eight per cent less fuel consumption and a reduced fuel flow for the class one Le Mans prototypes (LMP1). Therefore, the fact that the 919 has already beaten its 2015 pole time (1:39.721 minutes / average time from two drivers) in free practice, is thanks to the improved efficiency of the powertrain and the optimised aerodynamics.

In both free practice sessions the trio of reigning world champions – Timo Bernhard (DE), Brendon Hartley (NZ) and Mark Webber (AU) – topped the timesheets. The overall fastest lap of the day was set by Hartley in 1:39.655 minutes. The sister car of Romain Dumas (FR), Neel Jani (CH) and Marc Lieb (DE) came second in both sessions. In this car it was Jani who put in the fastest lap with a time of 1:41.344 minutes. A misunderstanding with a GT car sent Lieb temporarily into the gravel bed. The weather in Silverstone was classic for this track: rather cold with mixed conditions.

The Porsche 919 Hybrid, with its innovative powertrain concept, consisting of a downsizing two-litre V4 turbocharged petrol engine and two different energy recovery systems, has been significantly developed for even more efficiency. Although the 2016 regulations stipulate an eight per cent lower fuel consumption, the 919 almost equalled its lap times from the previous year at the official WEC Prologue in Le Castellet. For the six-hour race on the demanding Silverstone Formula One circuit, the prototype has got aerodynamically optimized body work for high downforce in the fast corners.

With factory support from Porsche, Dempsey Proton Racing fields a Porsche 911 RSR in the GTE-Pro class at the six-hour race on the storied racetrack in the British Midlands. The American racing driver and Hollywood star Patrick Dempsey is a joint partner of the squad. Three other Porsche customer teams will tackle the GTE-Am class with the 911 RSR. Several details on the 470 hp winning racer from Weissach, which is based on the seventh generation of the iconic 911 sports car, were revamped over the winter months. At this year’s Le Mans 24- hour race, Porsche will campaign its own GT factory team.

Sharing the cockpit of the #77 Porsche 911 RSR fielded by Dempsey Proton Racing is the reigning WEC GT champion Richard Lietz (Austria) and his works driver col- league Michael Christensen (Denmark). Two other factory pilots, Wolf Henzler (Germany/KCMG) and Patrick Long (USA/Abu Dhabi Proton Racing), will race for cus- tomer teams at Silverstone. Due to Patrick Long’s racing commitment in the USA on the same weekend, the former Porsche Junior Klaus Bachler (Austria) will stand in for him at Silverstone.

The 911 RSR, with which Porsche won all three GT championship titles for drivers, manufacturers and teams in the 2015 WEC season, is the fastest ever nine-eleven. The insights gained during the vehicle’s development and at race outings are directly incorporated into the design of future 911 generations. The 470 hp winning racer, which is characterised by an uncompromising lightweight design, received modifications for 2016, particularly to the aerodynamics.

Andreas Seidl (Team Principal): “Although we only have the two first free practice sessions behind us, I think we can call it a good start to the season. Both sessions were technically trouble-free. Despite changing weather conditions, and especially rain at the beginning of FP1, we managed to tick off almost every box from our to-do list, including a qualifying simulation. Our high downforce package works very well together with the various tyres from our partner Michelin. This goes for a dry track as well as a wet one. Now we will be analysing all the data and continue to prepare for qualifying and the race.”

Dr Frank-Steffen Walliser, Head of Porsche Motorsport: “After our successful sea- son in 2015 where we won the three GT titles, 2016 is a transitional year in the WEC for Porsche. We’re not running our own factory team in the series, but instead we’ll support our customer team, Dempsey Proton Racing, in their GTE-Pro-class cam- paign with the 911 RSR. The Proton Competition squad, who stands behind the team, has been a reliable and successful Porsche partner for many years. This outfit won the GT title in the European Le Mans Series in 2009 and 2010 with the 911 GT3 RSR. Despite the tough competition, I’m confident that Dempsey Proton Racing, with our works drivers Richard Lietz and Michael Christensen, will be good for some sur- prises this year.”

More quotes you can find in the press release in the section "Downloads".

One lap at the current Silverstone circuit is 5.9 kilometres long and has 18 corners. The first track on the former Royal Air Force base was opened in 1947, and the modern lay-out is the 11th version since then.

Last year Hartley/Webber took pole position in 1:39.721 minutes, just ahead of Dumas/Jani (1:40.340 min). In the race Bernhard/Hartley/Webber retired due to a gearbox problem. Dumas/Jani/Lieb finished in second place after 201 laps with a gap of 4.61 seconds to the winning number 7 Audi.

For the 5.9 km long lap in Silverstone the Porsche 919 Hybrid uses 5.37 megajoule from energy recovery systems and 60 megajoule from fuel – this translates into 1.511 kilograms or 2.03 litres of petrol.