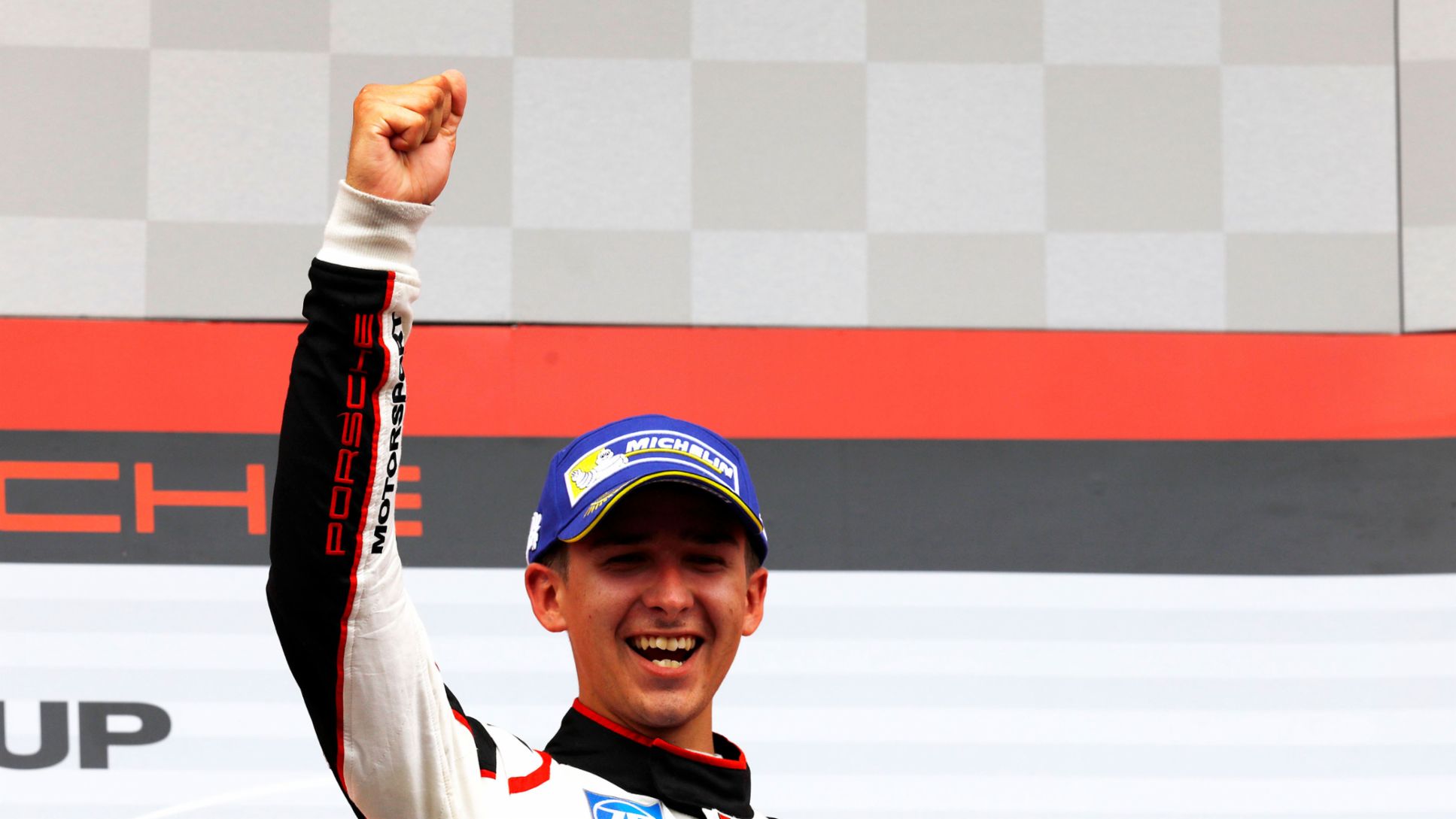 The 22-year-old Australian Matt Campbell (AUS/Fach Auto Tech), who contests his maiden season in the Porsche Mobil 1 Supercup, won round four watched by his family who had travelled from Down Under specifically. “I’m really happy. If I’m honest, I was a little relieved when I crossed the finish line. When you start from pole position you want to win. I managed to do this and I’m thrilled,” said Campbell. Second place went to the championship leader from Germany, Michael Ammermüller (Lechner MSG Racing Team). Finishing in third, Dylan Pereira (Lechner Racing Middle East) from Luxembourg achieved his best result so far in the Porsche Mobil 1 Supercup.

In qualifying, Campbell turned the fastest lap in the 32-strong Supercup field. With a rocket start, he defended his lead spot and proceeded to immediately build a gap between him and his pursuers until shortly before the flag. Even during the short safety car phase to salvage a vehicle, Campbell kept his cool. Behind him, a fight for the other grid positions raged over the 16 laps on the 4.326-kilometre racetrack.

Heading into the race from the second grid spot, Mattia Drudi (I/Dinamic Motorsport) held his position until lap 13. Ammermüller and Pereira trailed close behind in their 911. When Drudi suddenly lost some pace, the two grabbed their chance to slip past. “Mattia Drudi got slower towards the end and when he made a mistake I overtook him. I won the last three races and now I’ve finished on second. I’m happy with that,” declared the seasoned Porsche specialist, Ammermüller. A beaming Pereira accepted his trophy: “A dream has been fulfilled with this podium result. This gives me huge motivation for the future. At times I was even a little faster than Michael Ammermüller, but I couldn’t find a way around him. As far as I’m concerned this can happen more often.” Drudi ultimately finished on fourth place.

Taking up the race from seventh on the grid, Porsche Junior Dennis Olsen (N/Walter Lechner Racing Team) managed to work his way up to fifth place. “I tried everything during the race but I couldn’t do more. Josh Webster and I had a tough duel and luckily I was able to get past him in the last lap. Now I’m looking ahead. Next week we race at Silverstone and I would like to attack again.” Behind Olsen, Josh Webster (GB/Fach Auto Tech) secured sixth place. The best amateur pilot was the Norwegian Roar Lindland (MRS Cup-Racing) ahead of Egidio Perfetti (NL/MOMO-Megatron Team Partrax) and Philipp Sager (A/MRS Cup-Racing).

In the championship standings, Ammermüller maintains his lead with 78 points after four of eleven races. Olsen ranks second with 64 points. Thanks to his win, Campbell moves up the points’ table to sit third. In the separate rookie classification, Olsen leads ahead of Campbell. First place in the amateur category is occupied by Lindland. In the newly created Nations League, Germany leads with 78 points, followed by Norway (64) and Australia (60).

Round five of the Porsche Mobil 1 Supercup is contested from 14 to 16 July at Silverstone in Great Britain. For five Supercup regulars, this race will be on home turf: Daniel Cammish from Leeds, Josh Webster from Stowmarket, Paul Rees from Oxford competes for the MOMO-Megatron Team Partrax, Ryan Cullen was born in Britain but earns points towards the Nations League for Ireland. Tom Sharp (Surrey) as well as Marc Radcliffe (Rufford) drive for the British IDL Racing squad.