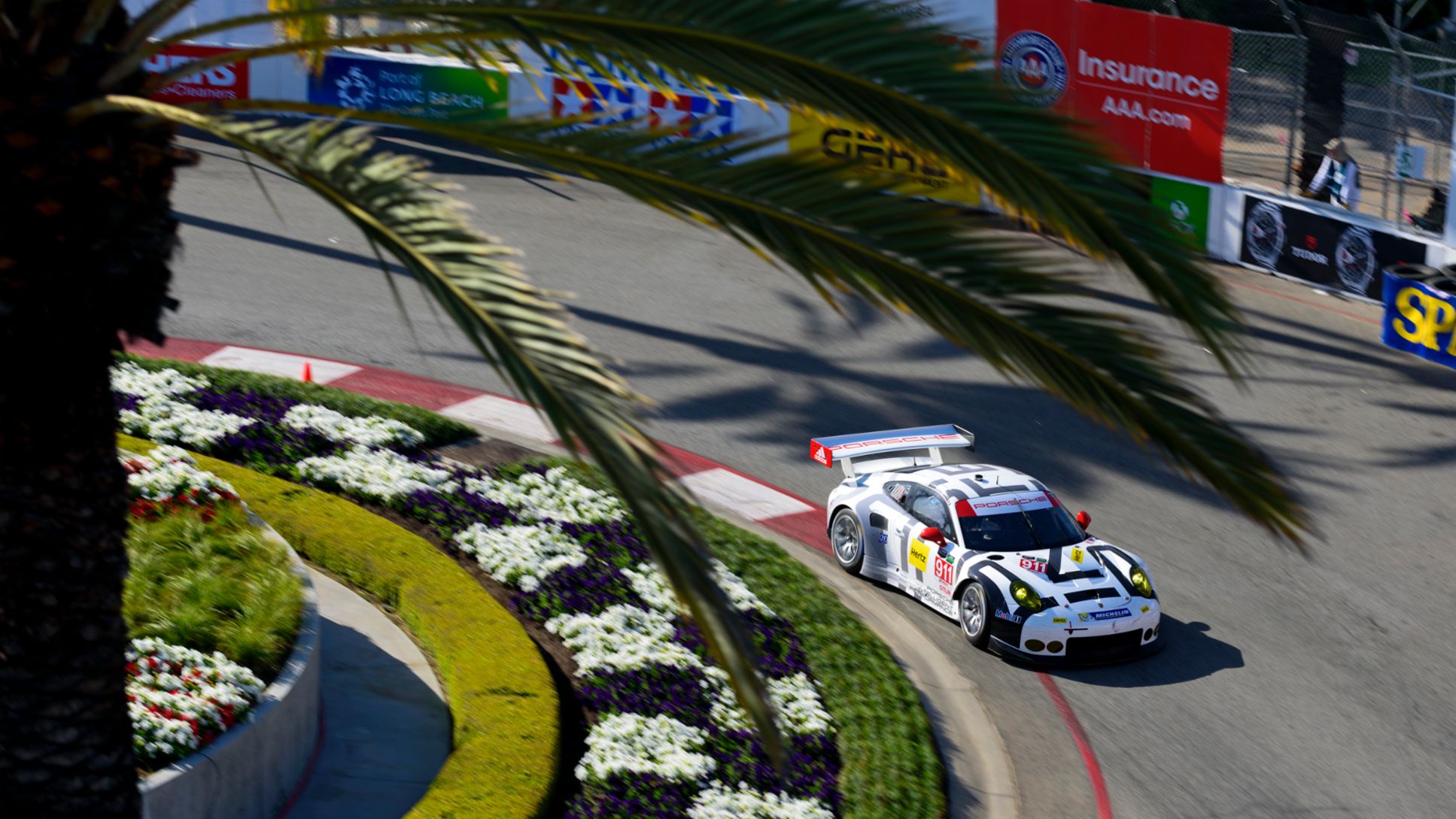 With a duration of just 1:40 hours, this is the shortest race on the series’ calendar. On the challenging, completely walled and fenced street circuit in the harbour area, the Porsche North America factory squad will again campaign two 470 hp Porsche 911 RSR in the hotly-contested GTLM class.

The race on the 3.167-kilometre street circuit with the postcard-perfect backdrop of sun, sea and palms is America’s equivalent to the Monaco Grand Prix. And like in the Principality at the Cote d’Azur, there is no shortage of celebrities at the Pacific Coast – especially with Hollywood just around the corner.

The new factory finish is not the only change that the 911 RSR received for the 2016 season. The 470 hp winning racer from Weissach, which is based on the seventh generation of the iconic 911 sports car and characterised by systematic lightweight design, underwent modifications to the aerodynamics to comply with the new GTLM regulations. The GTD class, in which Porsche customer teams run the new Porsche 911 GT3 R, is not contested at the Long Beach event.

Dr Frank-Steffen Walliser, Head of Porsche Motorsport: “We’ve started the season with two podium results in this intensely competitive and popular racing series – which is a much more successful start than in our championship winning year of 2015. At Daytona and Sebring we were very close to scoring our first win of the year with the 911 RSR. After these two races, Porsche is leading the North American Endurance Cup, and that speaks volumes about the consistently strong performances of the 911 RSR and our drivers. We can build on this for the rest of the season. Now we want to turn our full attention to Long Beach, the shortest race of the season on a very tight street circuit. This poses very special challenges for our whole team.”

Marco Ujhasi, Overall Project Manager GT Works Motorsport: “This race is not only thrilling for the drivers, it’s also a huge event for the fans. The entire squad is put under immense pressure. With the race being so short, every second we lose in the pits is extremely critical. The choreography has to be perfect otherwise you haven’t got a chance.”

Patrick Pilet (911 RSR #911): “It’s a fabulous challenge to race non-stop at the limit on such a tight street circuit. There are virtually no run-off zones. Every mistake is punished immediately. If you take a corner too fast you’ll hit the wall. Still, it’s one of my favourite American racetracks. In 2008 I set my first pole there for Porsche. Perhaps now I could follow up with my first victory.”

Nick Tandy (911 RSR #911): “Long Beach is the first West Coast race of the season. The IndyCar series is contested there on the same weekend, and this is why it traditionally attracts huge crowds. So of course we want to show the spectators just how exciting sports car racing is. After the long distance classics in Daytona and Sebring, the season really heats up for me at Long Beach.”

Earl Bamber (911 RSR #912): “The two longest races are behind us by the time we get to the shortest race of the season at Long Beach. But for us drivers it doesn’t make much of a difference. The demands are basically the same at every race: You’re up against extremely tough competition, you have to be totally concentrated and you can’t make one mistake.”

Frédéric Makowiecki (911 RSR #912): “Long Beach is one big motorsport party with two top racing series all-in-one. The fans love it and the atmosphere reflects that. I really like this race. The setting is as unique as the circuit. The qualifying is critical. We will focus on achieving a decent grid spot so that we’re in a good position for a top result.”