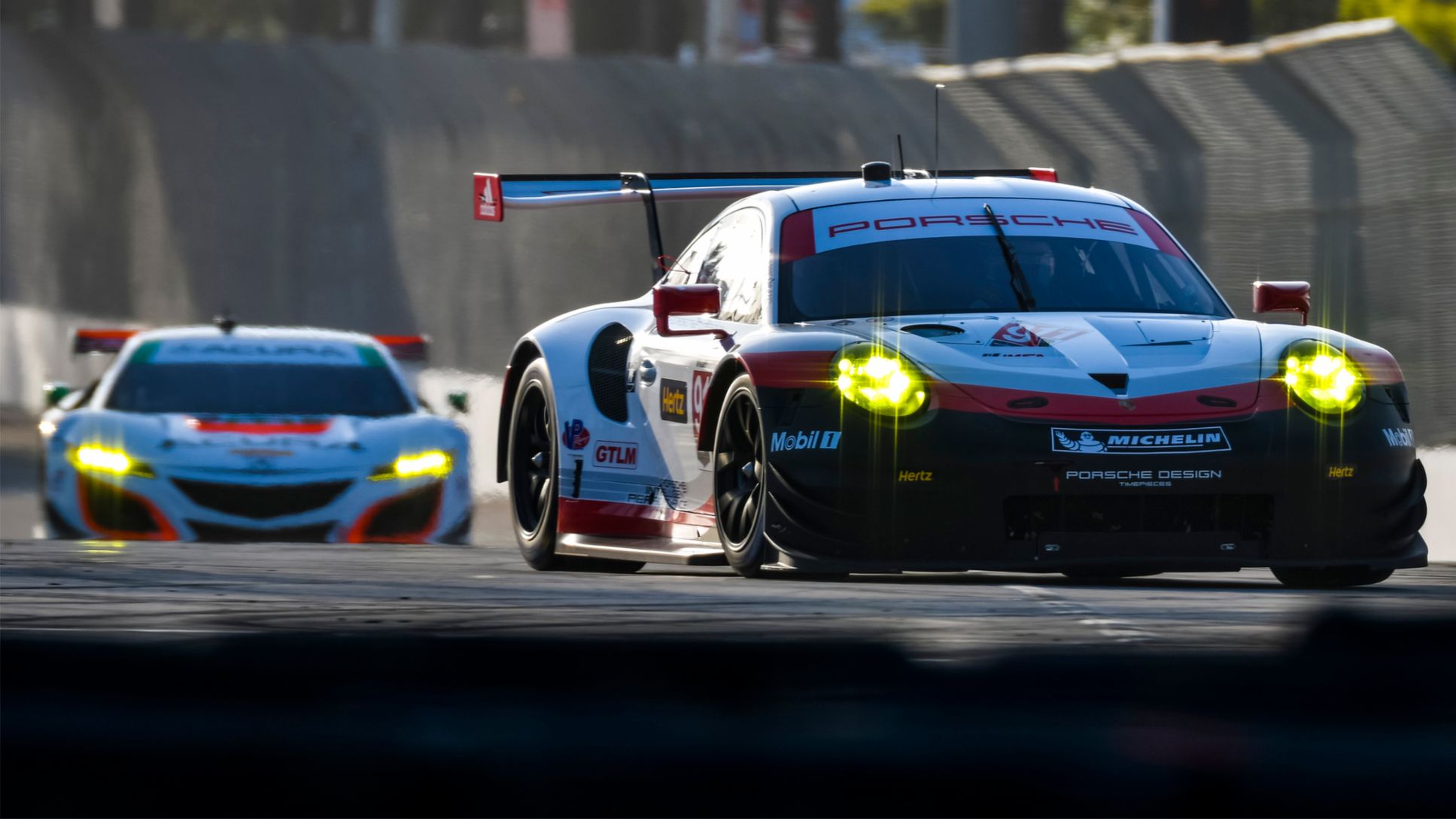 Two new 911 RSR tackle the shortest race of the season

With the long distance classics of Daytona and Sebring ticked off, next up is the shortest race on IMSA SportsCar Championship calendar on 8 April: Round three on the fully walled and fenced street circuit in Long Beach, California, is over in just 100 minutes.

The race in the harbour region of Long Beach, where the pits are just a stone’s throw away from where the docked ocean-liner giant “Queen Mary” lies anchored, is a highlight of the season. Another very popular US series, IndyCar, is also contested on the 3.167-kilometre street circuit on the same weekend. This race is regarded as America’s equivalent to the Monaco Grand Prix and attracts many celebrities from nearby Hollywood.

Four works drivers tackle the GTLM class with the new Porsche 911 RSR campaigned by the Porsche GT Team. The number 911 cockpit is shared by Patrick Pilet (France) and Dirk Werner (Germany), who kicked off the season with second place at Daytona. Laurens Vanthoor (Belgium) and Kévin Estre (France) take on the opposition in the #912 car. In the GTD class, three works drivers compete for Porsche customer teams with the 911 GT3 R: Jörg Bergmeister (Germany) for Park Place Motorsports, Daytona winner Michael Christensen (Denmark) for Alegra Motorsports and Wolf Henzler (Germany) for TRG. CORE Autosports will run another 911 GT3 R.

The Long Beach round marks only the third race for the 100-percent newly developed 911 RSR.  Depending on the size of the restrictor, the motor, which is now positioned in front of the rear axle, puts out around 375 kW (510 hp). Thanks to the particularly large rear diffuser combined with a top-mounted rear wing, the level of downforce and the aerodynamic efficiency were significantly improved. The 911 GT3 R, mounted with the new ultra-modern, four-litre, flat-six engine with direct fuel injection, started into its second season with a GTD class win at Daytona. Porsche had designed the more than 368 kW (500 hp) customer sports racer for worldwide GT3 series on the basis of the 911 GT3 RS production sports car.

Dr Frank-Steffen Walliser, Head of Porsche Motorsport: “The opening phase of the IMSA SportsCar Championship throws everything at us: First the long-distance classics of Daytona and Sebring, then the shortest race of the season – they could hardly be more diverse. The very aspect that challenges the drivers and teams is what adds extra thrills and excites the spectators. After the two season-opening races in Florida, we’re now looking forward to showcasing our new 911 RSR to the Porsche fans in California. We’re tackling the Long Beach event as last year’s winners. This is extremely motivating for the entire squad, particularly after our misfortune in Sebring.”

Marco Ujhasi, Overall Project Manager GT Works Motorsport: “This race puts the whole team under extreme pressure. Because the race is so short, every second you lose in the pits is two times more painful. We normally do just one pit stop. Refuel, new tyres, change drivers – it has to run like clockwork otherwise you’ve already lost. That’s what makes this race so thrilling for drivers and such a huge spectacle for fans.”

Sebastian Golz, Project Manager GT Customer Motorsport: “The rubber left on the track between the practice sessions and the race changes the surface characteristics more on a city circuit than on a dedicated racetrack. The very slow hairpins require good traction so that the drivers can get back on the throttle as quickly as possible. Thanks to its vehicle concept, our 911 GT3 R certainly has an advantage in this regard.”

Patrick Pilet (911 RSR #911): “The Long Beach city circuit is one of my favourite tracks in the USA. Last year we scored our first win of the season there, and we’d like to do that again with the new 911 RSR. The fans know why they come to Long Beach: To be permanently at the limit on this track is a fantastic challenge for drivers and makes for a gripping race.”

Dirk Werner (911 RSR #911): “Long Beach is a very special place to go racing. It’s a fantastic city circuit and great fun. The comparison to Monaco is really fitting. The racetrack is tricky and the more rubber that’s left on the track, the faster we become from one practice to the next. You have to stay focussed. The special challenge will be to find a perfect setup for our 911 RSR during the short practice session.”