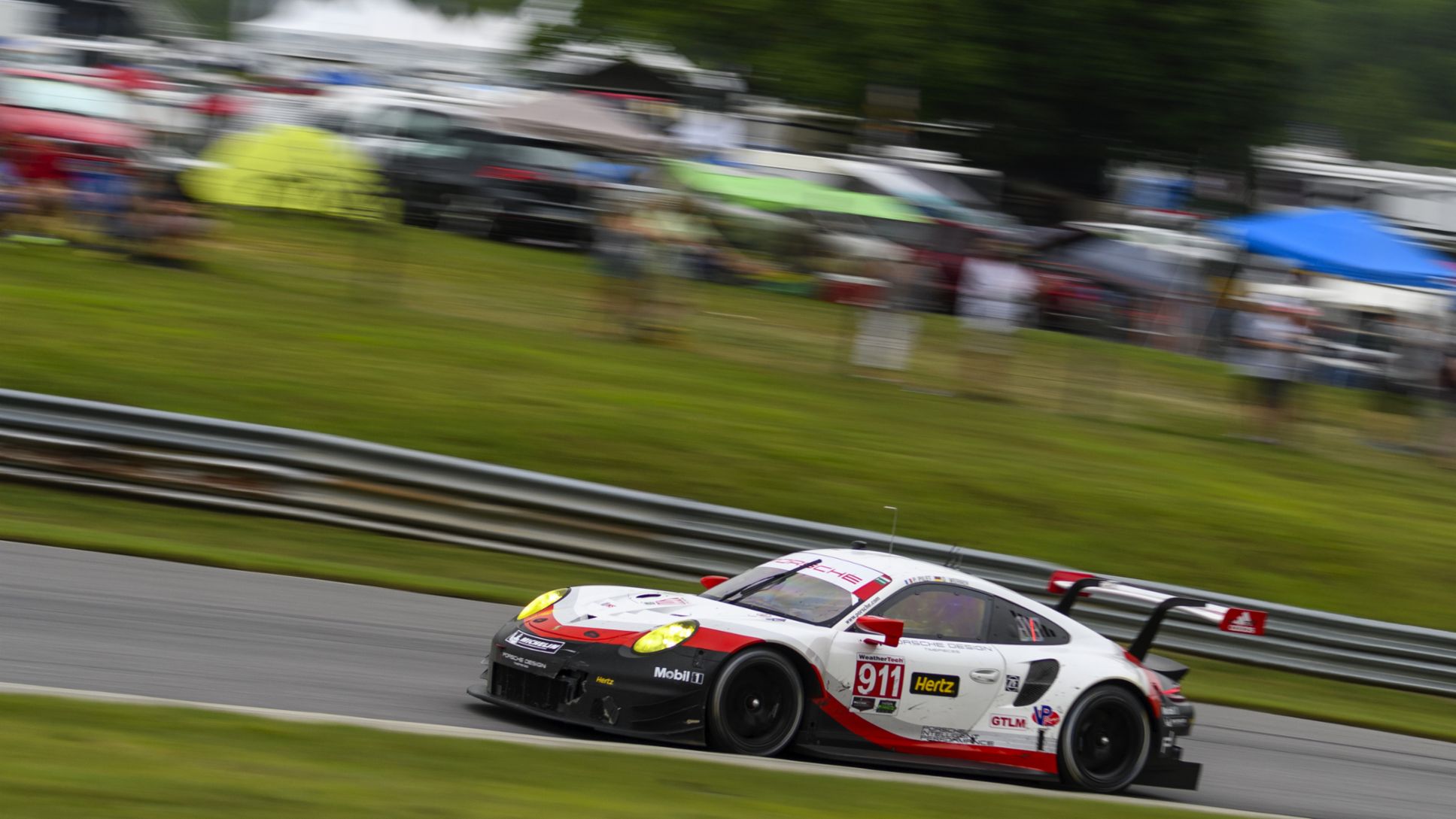 The race weekend at Lime Rock Park could not have ended better for Porsche: The new Porsche 911 RSR celebrated its historic first victory at the racetrack in the US state of Connecticut. On Saturday, Patrick Pilet and Dirk Werner won round seven of the IMSA SportsCar Championship, North America’s premier sports car race series.

The  race car, which Porsche Motorsport designed from new at Weissach, had already posted three pole positions previously. In the fiercely-competitive and gripping race from start to finish, Porsche managed to beat its strong rivals from BMW, Chevrolet, Ferrari and Ford. Since Lime Rock was exclusively for GT vehicles, this meant that the Porsche pilots in the #911 Porsche 911 RSR were also the overall winners. In the second 911 RSR (#912) fielded by the Porsche GT Team, their teammates Laurens Vanthoor (Belgium) and Gianmaria Bruni (Italy) clinched second place, making the weekend perfect for Porsche with a double victory. And the icing on the cake was the GTD class victory thanks to Jörg Bergmeister (Germany) and Patrick Lindsey (USA) in the 911 GT3 R campaigned by the Park Place Motorsports customer team.

When the 24-strong field of the GTLM and GTD classes took off on the short 2.414-kilometre race track in the idyllic rural region of Connecticut, conditions were cloudy and not as hot as Friday’s temperatures. In the two free practices and the qualifying, teams and drivers had had to contend with temperatures exceeding 30 degrees Celsius. Traditionally, Lime Rock is a two-day event. Racing is not permitted on Sundays as a church service is held in a small chapel close to the track. The crew of the Porsche GT Team coped well with the overtime hours in the heat, and were rewarded with pole position for the 911 RSR. The squad watched from the pit wall as polesitter Gianmaria Bruni made a catapult start off the line to pull clear of the field.

On this short track where overtaking is extremely difficult, Dirk Werner also got away cleanly at the start to make up one position, which had the Porsches running in positions one and two at an early stage. After an unintentional detour off the track, Gianmaria Bruni had to come in for an earlier than scheduled first pit stop to remove grass from the radiator. Still, he managed to hand the 911 RSR over to his teammate Laurens Vanthoor while still in the lead. Dirk Werner pulled into the pits for a service and driver change immediately behind him. Patrick Pilet took the wheel of the #911 vehicle, and promptly rejoined the race in front his team colleague. Hence, shortly before the halfway mark of the 2.40-hour race, he was in the lead, with Laurens Vanthoor behind him in second place. With the Porsche duo fending off all attacks from their pursuers, this order remained to the flag. After 181 laps of Lime Rock Park, the double victory for the new 911 RSR was achieved – the greatest success of the season so far.

Victory in the GTD class, in which customer teams field the Porsche 911 GT3 R, rounded off Porsche’s successful weekend at Lime Rock. This marks the seventh victory for Jörg Bergmeister (Germany) on this circuit. For this race, he joined forces with Patrick Lindsey (USA) for Park Place Motorsports. His factory driver colleague Patrick Long (USA) clinched third place for Alegra Motorsports with Daniel Morad (USA).

Steffen Höllwarth, Programme Manager IMSA SportsCar Championship: “The maiden victory with a new car is always a particularly emotional moment. And if you can bring home a double victory and even overall victory, then that makes you incredibly proud. I’m proud not only of our team here in the USA, but also of our colleagues in Weissach and our sister team in the WEC. This success belongs to us all. We can now build on this over the rest of the season. In the race, our 911 RSR was faster than the competition when the temperatures were initially high, but found it a little tougher once it cooled down. In terms of our race strategy, we again did very well today. For the most part, our cars had a clear run. On this short racetrack where overtaking is very difficult, that proved to be a key to success.”

Patrick Pilet (911 RSR #911): “Incredible. We had to wait so long for this victory but now it’s finally happened. The entire team worked brilliantly this weekend. This circuit suits our 911 RSR well and we immediately found a super setup. It was a tough battle over the whole distance. Our car was consistently fast today, but you always have to stay fully focussed. With so many cars out on the track you inevitably swap paint with your rivals. Luckily everything went well. It was a fantastic weekend. We’re now going to enjoy our success and then attack again at Road America in a fortnight.”

Dirk Werner (911 RSR #911): “We’ve worked towards this day for a long time. We had to cope with several setbacks this season, but we never threw in the towel. It’s wonderful that the first win for the new 911 RSR has finally come. And the fact that it’s my first win as a Porsche works driver makes this achievement very special. This racetrack certainly has it all. Because it’s so short, it’s a constant fight for positions and nonstop overtaking manoeuvres. The fans definitely enjoyed it. We did too. It’s a great day for Porsche.”

Laurens Vanthoor (911 RSR #912): “I’m pleased for Porsche. The first win for the new 911 RSR as well as our second place is a great result. It was a dream come true for me. We started from pole and held the lead over long stints. But then we had to pit early after a minor excursion onto the grass. Personally, I’m somewhat disappointed, but that’s racing. The important thing is the win for Porsche. I’m thrilled that I could contribute to this double victory.”

Gianmaria Bruni (911 RSR #912): “I’m delighted for the squad and for Porsche. The maiden victory for the new 911 RSR plus second place – that’s a fantastic result of which we can all be very proud. We’ve worked very hard towards this day. The race from pole position went well for me until shortly before my pit stop when I suddenly lost the rear and ended up on the grass. That put an end to our fight for victory. Congratulations to my team colleagues.”

Jörg Bergmeister (911 GT3 R #73): “An unbelievable weekend. This was my seventh win at Lime Rock, and Porsche’s first win with the new 911 RSR. Our 911 GT3 R ran perfectly without the slightest problem. It was a tough fight from the very start, but it was tremendous fun.”
Patrick Long (911 GT3 R #28): “That was a great day for Porsche. Congratulations on the first win for the new 911 RSR. We finished third after a difficult race. It’s a wonderful result for this young and very enthusiastic team.”

The new Porsche 911 RSR, which was designed and built by Porsche Motorsport in Weissach, is based on the seventh generation of the iconic 911 sports car and is the most spectacular Porsche 911 of all time. It celebrated its race debut in January 2017 at the 24 Hours of Daytona in the USA. The race car is a totally new development. With the predecessor model, Porsche won the GT championship titles for manufacturers, drivers and teams in both the Sports Car World Endurance Championship and the IMSA SportsCar Championship in 2015.

Round eight of the IMSA SportsCar Championship will be contested on 6 August at Road America in Elkhart Lake in the US State of Wisconsin.