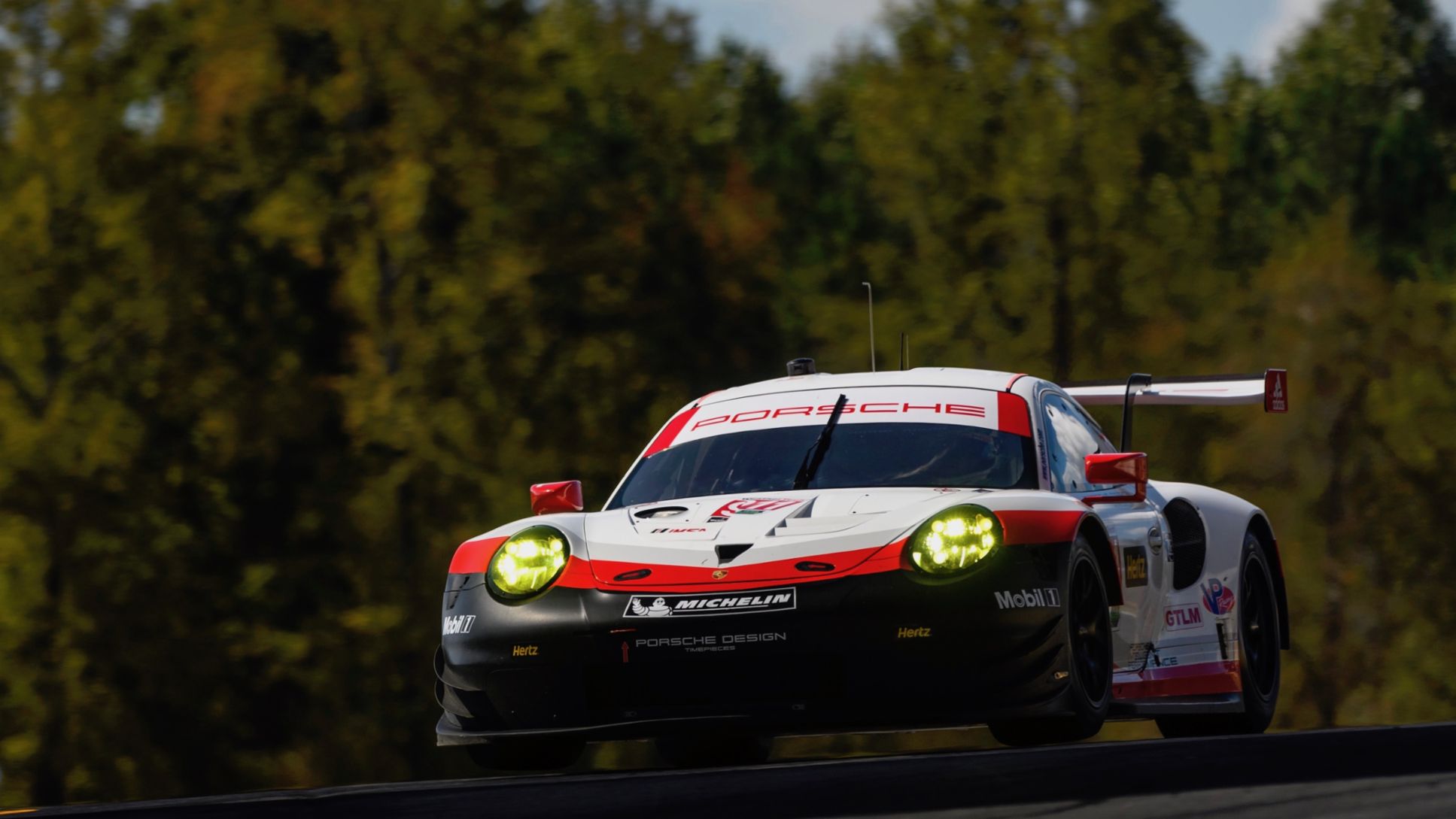 At Petit Le Mans contested on the legendary Road Atlanta racetrack on 7 October, the Porsche GT Team will fight for the first title for the new 911 RSR.

Heading to the final round of the North American Endurance Cup – a four-race competition encompassing the long-distance classics of Petit Le Mans, Daytona, Sebring and Watkins Glen – Porsche is leading both the drivers’ and teams’ classification. Performance and reliability are the key factors in this competition, which incorporates the most important and toughest races of the season IMSA SportsCar Championship season. The Porsche GT Team fields two Porsche 911 RSR in the hotly contested GTLM class at the ten-hour race on the tradition steeped 4.087-kilometre Road Atlanta circuit at Braselton in the US state of Georgia. In the GTD class, four Porsche customer teams campaign the 911 GT3 R.

Petit Le Mans at Road Atlanta was contested for the first time in 1998 and is one of the greatest sports car races in the United States. As the most successful manufacturer in the history of this race, Porsche has so far celebrated 20 class victories – 18 with the 911, and two with the RS Spyder. The highlight, however, was when Nick Tandy, Patrick Pilet and Richard Lietz scored the first overall victory with the 911 RSR. This also represents the first overall victory for a GT vehicle at this race. This year marks the 20th running of the long-distance event. The most successful Porsche pilot at Petit Le Mans is Jörg Bergmeister with five victories.

The Porsche 911 RSR, which celebrated its maiden victory at Lime Rock on 22 July, is a completely new development based on the high-performance 911 GT3 RS sports car: the suspension, body structure, aerodynamic concept, engine and transmission have all been designed by Porsche Motorsport in Weissach from scratch for this season. Depending on the size of the restrictor, the motor, which is now positioned in front of the rear axle, puts out around 375 kW (510 hp). The 911 GT3 R, mounted with the new ultra-modern, four-litre, flat-six engine with direct fuel injection, was designed by Porsche for worldwide GT3 series on the basis of the 911 GT3 RS production sports car. This season, the 368+kW (500 hp) customer sport racer celebrated victories at Daytona and Lime Rock.

Dr Frank-Steffen Walliser, Vice President Motorsport and GT Cars: “Our new 911 RSR not only underlined its huge potential by winning at Lime Rock in its first US season. It also impressed with its reliability and performance at the other longdistance classics in Daytona, Sebring and Watkins Glen. This now puts us in a strong position to win the North American Endurance Cup at the Petit Le Mans race at Road Atlanta. It’s quite unusual for a newly developed car to show such reliability and perform so well in its first season, particularly at the toughest races and against such renowned and established opponents that are contesting the GTLM class. We’ll do our utmost bring this prestigious title home again to Weissach and to crown an impressive first season for the 911 RSR with another great success.”

Marco Ujhasi, Director GT Factory Motorsports: “The race at Road Atlanta is a wonderful way to conclude the season in the USA. This circuit has a very special flair, and the fact that it suits us was underlined in 2015 with the first overall victory for Porsche. Our tests at Road Atlanta with our new 911 RSR went well, so we’re feeling well prepared and full of confidence to tackle the season finale. Our goal is clear: We want to win the North American Endurance Cup. We’ve laid the foundations for this with our successes at Daytona, Sebring and Watkins Glen – now only one last step remains.”

Sebastian Golz, Project Manager GT Customer Motorsport: “For the drivers, Road Atlanta is one of the greatest tracks in the USA. However, a lot is demanded from the engineers. They need to work with the pilots to find a setup that keeps tyre deterioration on this circuit at a manageable level, without it having too much of a negative effect on the performance. Still, after clinching second place with the 911 GT3 R there last year we’re feeling confident that our customer teams will find the best possible compromise. If they succeed, they can bring home victory.”

Patrick Pilet (911 RSR #911): “I have the best memories of Petit Le Mans, especially of 2015 when we clinched overall victory for Porsche there. This year we’re again going for another big triumph for the company: to win the North American Endurance Cup. Dirk and I are leading the drivers’ classification after our performances at Daytona, Sebring and Watkins Glen and we’ll do everything with our team to retain thelead after this race. If we manage this, then perhaps the team title and possibly even the manufacturers’ classification could go to Porsche. This would be a perfect way to finish the season.”

Dirk Werner (911 RSR #911): “Petit Le Mans is the last race of the North American Endurance Cup and therefore it’s very significant for us. Patrick and I will tackle the finale as the points’ leaders. Our new 911 RSR has performed brilliantly this season, particularly at the tough long-distance races, and it’s proved to be very reliable despite the enormous demands. We’re feeling confident that this will again be the case at Petit Le Mans and that we’ll be able to win this important endurance competition for Porsche.”

Nick Tandy (911 RSR #911): “Petit Le Mans is one of my favourite racetracks. By returning to the fascinating Road Atlanta circuit with the new 911 RSR, a big wish of mine is fulfilled. After all, I witnessed the first development phase of the car firsthand. I won Petit Le Mans in 2013 and 2015. It’s been two years now – so it’s time for my third win. If winning would give Porsche the North American Endurance Cup, then that would make it all the more special and a great triumph.”

Laurens Vanthoor (911 RSR #912): “My first time at Road Atlanta was when we tested there several weeks ago. I think it’s one of the most beautiful racetracks in America. The main goal for Porsche at this final round is to win the North American Endurance Cup. The entire team will focus completely on achieving this.” Gianmaria Bruni (911 RSR #912): “I’m looking forward to my first Petit Le Mans race with Porsche. Road Atlanta is a very challenging racetrack. We’ve gone testing there and we saw that it suits our new 911 RSR very well. For Porsche, the season finale is about claiming the North American Endurance Cup. To win this would be a great achievement. I hope that we can play our part in contributing to this success.”

Earl Bamber (911 RSR #912): “Contesting Petit Le Mans with the new 911 RSR is a great challenge. I was involved in its basic development and got the chance to test the car recently at Road Atlanta – it was an impressive experience. I’m looking forward to working with the team – I’ve enjoyed a good and successful time with them. It would be wonderful if we could assist Porsche in bringing home the North American Endurance Cup again.”

Michael Christensen (911 GT3 R #28): “Petit Le Mans is always spectacular. I’m pleased to be able to compete there in Alegra Motorsports’ 911 GT3 R. I won the season-opener at Daytona with this team. The squad is young and very ambitious, so it’s huge fun to work with these guys. They’re all super keen to show what they can do at this last race of the season.”

Patrick Long (911 GT3 R #50): “A ten-hour race on such a great track like Road Atlanta is always a very special challenge for the drivers and teams. At the start shortly before midday it’s usually very warm, and after dark it gets noticeably cooler. This change in temperature makes the tyre choice even more difficult. I’m driving the 911 GT3 for the WeatherTech Racing squad for the first time and obviously I’m hoping that I can contribute to a successful conclusion to the season for the team.”

Jörg Bergmeister (911 GT3 R #73): “Petit Le Mans as the season-finale is another real highlight. Despite the enormous challenges, it’s a race we all look forward to. We had a good year with our 911 GT3 R and won the race at Lime Rock. At Road Atlanta we’ll do our very best to ensure it isn’t the only victory.”

The “Balance of Performance” applies to the GTLM class of the IMSA SportsCar Championship. “BoP” was introduced by the IMSA with the aim of achieving a level playing field for the different vehicle concepts in this famously competitive class, and thus ensure balanced and fair races. It should not make a fundamental difference if a vehicle is powered by a turbocharged or normally aspirated engine, or if the engine is mounted on the front axle or in front of the rear axle. The basic aerodynamic shape of the vehicles should also not play a decisive role. After an initial grading by the IMSA, the performance data of the vehicles are acquired during the races via telemetry – not only lap times but, for example, acceleration profiles and engine mappings.

This data input is then analysed and incorporated into the “BoP”. The most frequently used means of adjusting the performance level is through adding or subtracting weight as well as increasing or limiting the engine output through a restrictor or boost. In keeping with the rule-makers’ intention, the key to success on the racetrack is not about the individual potential of a vehicle, instead it’s about the performance of the drivers, the race strategy, a perfect setup or the skill of the team with their pit stops.

This is the North American Endurance Cup

The North American Endurance Cup, which Porsche claimed in 2014, is the toughest and most prestigious classification for performance and reliability in GT racing worldwide. The long-distance classics of the Daytona 24 Hours, the 12 Hours of Sebring, the Watkins Glen 6-hour race, as well as the 10-hour Petit Le Mans race at the legendary Road Atlanta racetrack count towards this competition. Points are not only awarded for the final result, but also at intervals, for instance, after four and eight hours of the Petit Le Mans event. All races as contested as part of the IMSA SportsCar Championship.