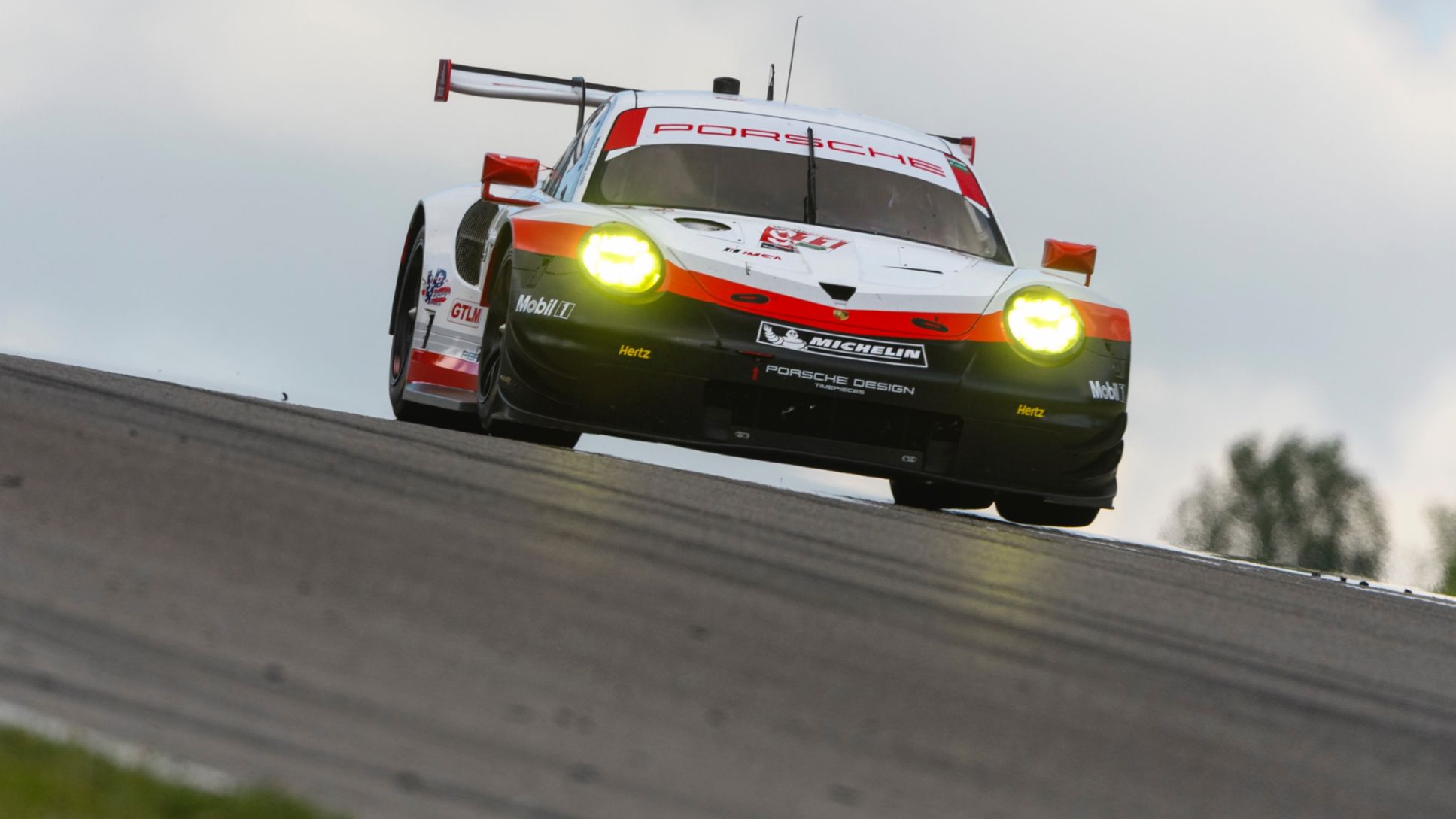 After the successful trip to Canada, which yielded the first pole position for the new 911 RSR, Porsche now returns with the IMSA SportsCar Championship to the USA.

Lime Rock Park hosts round seven of the most important and popular sports car series on the North American continent on 22 July. With a length of just 2.414 kilometres, the racetrack in the idyllic rural region of the US state of Connecticut is the shortest on the championship calendar. The Porsche GT Team fields two 911 RSR in the GTLM class. The racer is based on the seventh generation of the iconic 911 sports car and was a completely new development of Porsche Motorsport in Weissach. Two Porsche customer teams tackle the GTD class with the 911 GT3 R, the winning car of the Daytona 24-hour race. This year at Lime Rock only these two categories with a total of 24 cars will compete, hence the overall winner will definitely be a GT vehicle.

Many sports car fans associate Lime Rock Park with a family outing into the countryside. They often travel from far and wide and are well equipped with camping chairs, picnic tables, sun umbrellas – and cool boxes the size of dog kennels. Because there are no grandstands along the circuit with its six right-hand corners and just one left-hander, spectators follow the action from the grassy hills surrounding the racetrack.

The 911 RSR fielded in the IMSA SportsCar Championship, which posted its first pole position recently at Bowmanville, is a completely new development. Depending on the size of the restrictor, the motor, which is now positioned in front of the rear axle, puts out around 375 kW (510 hp). The level of downforce and the aerodynamic efficiency were significantly improved. The 911 GT3 R, mounted with the ultra-modern four-litre, flat-six engine with direct fuel injection, was designed by Porsche for worldwide GT3 series on the basis of the 911 GT3 RS production sports car. The more than 368 kW (500 hp) customer sports racer celebrated a class victory at this year’s 24 Hours of Daytona.

Dr. Frank-Steffen Walliser, Vice President Motorsport and GT Cars: “This is the third IMSA SportsCar Championship race this month after Watkins Glen and Bowmanville. With such a schedule there’s not a lot of time to catch our breath. But after our strong performance in Canada, which unfortunately went unrewarded despite setting pole and the fastest race lap, the drivers and teams can hardly wait to continue. In Bowmanville the maiden victory for our new 911 RSR was within reach. Now we’ll do everything at Lime Rock Park to bring it home.”

Marco Ujhasi, Director GT Factory Motorsports: “The recipe for success on this very short circuit is comparatively easy: You have to start from pole and drive a clean race. Overtaking is almost impossible here so a good qualifying result is paramount. In the very little time we have available over this two-day event, we need to concentrate.”

Sebastian Golz, Project Manager GT Customer Motorsport: “The long sweeping corners of this right-hand track put a lot of stress on the left tyres. The key to success is to carefully maintain the grip level of the tyres over the entire stint, because there is no time to recover if you’re too tough on them initially. And the drivers have virtually no time to take a breath.”

Patrick Pilet (911 RSR #911): “The Lime Rock Park circuit reminds me a lot of a go-kart track. It’s short and tight and that makes it special. This is the only track where we turn 70 laps in one stint. That’s unusual. Most of the time the cars are bunched up very close together and this treats fans to some gripping duels in every lap. I’m sure that this racetrack will suit our new 911 RSR very well.”

Dirk Werner (911 RSR #911): “Only GT cars compete at Lime Rock so we can go for overall victory. That makes this race especially interesting. We’ve not yet competed there with the new 911 RSR, so we don’t have any practical experience and therefore we need to make sure we find the best possible setup for our car during the short practice session. I’m looking forward to Lime Rock. The critical phase of the championship now begins.”

Laurens Vanthoor (911 RSR #912): “Lime Rock is a new racetrack for me and therefore it’s an interesting challenge. Instead of the usual three free practices, there are just two. And then there’s the qualifying. We don’t have a lot of time to set up the new 911 RSR for this very special circuit. Still, I hope that we can do well.”

Gianmaria Bruni (911 RSR #912): “I haven’t yet been able to gain a lot of experience at Lime Rock. The last time I raced here was in 2010. I drove one of the practices and that was all. My teammate drove the second practice and the qualifying – and destroyed our car in the first race lap. Apart from that I like the New England states. I’m very much looking forward to the race and the special atmosphere of this racetrack in the middle of the countryside. Of course I’m hoping that I’ll have more luck this time than I did in 2010.”

Jörg Bergmeister (911 GT3 R #73): “The track has everything that makes racing fun – very fast curves mixed with slow corners where we can use the 911 GT3 R’s great traction. Lime Rock Park has almost always been good turf for me. Of the eight times I’ve raced there I’ve won six of them. I’d be happy for that to continue.”

The “Balance of Performance” applies to the GTLM class of the IMSA SportsCar Championship. “BoP” was introduced by the IMSA ​​with the aim of achieving a level playing field for the different vehicle concepts in this famously competitive class, and thus ensure balanced and fair races. It should not make a fundamental difference if a vehicle is powered by a turbocharged or normally aspirated engine, or if the engine is mounted on the front axle or in front of the rear axle. The basic aerodynamic shape of the vehicles should also not play a decisive role.

After an initial grading by the IMSA, the performance data of the vehicles are acquired during the races via telemetry – not only lap times but, for example, acceleration profiles and engine mappings. This data input is then analysed and incorporated into the “BoP”. The most frequently used means of adjusting the performance level is through adding or subtracting weight as well as increasing or limiting the engine output through a restrictor or boost. In keeping with the rule-makers’ intention, the key to success on the racetrack is not about the individual potential of a vehicle, instead it’s about the performance of the drivers, the race strategy, a perfect setup or the skill of the team with their pit stops.