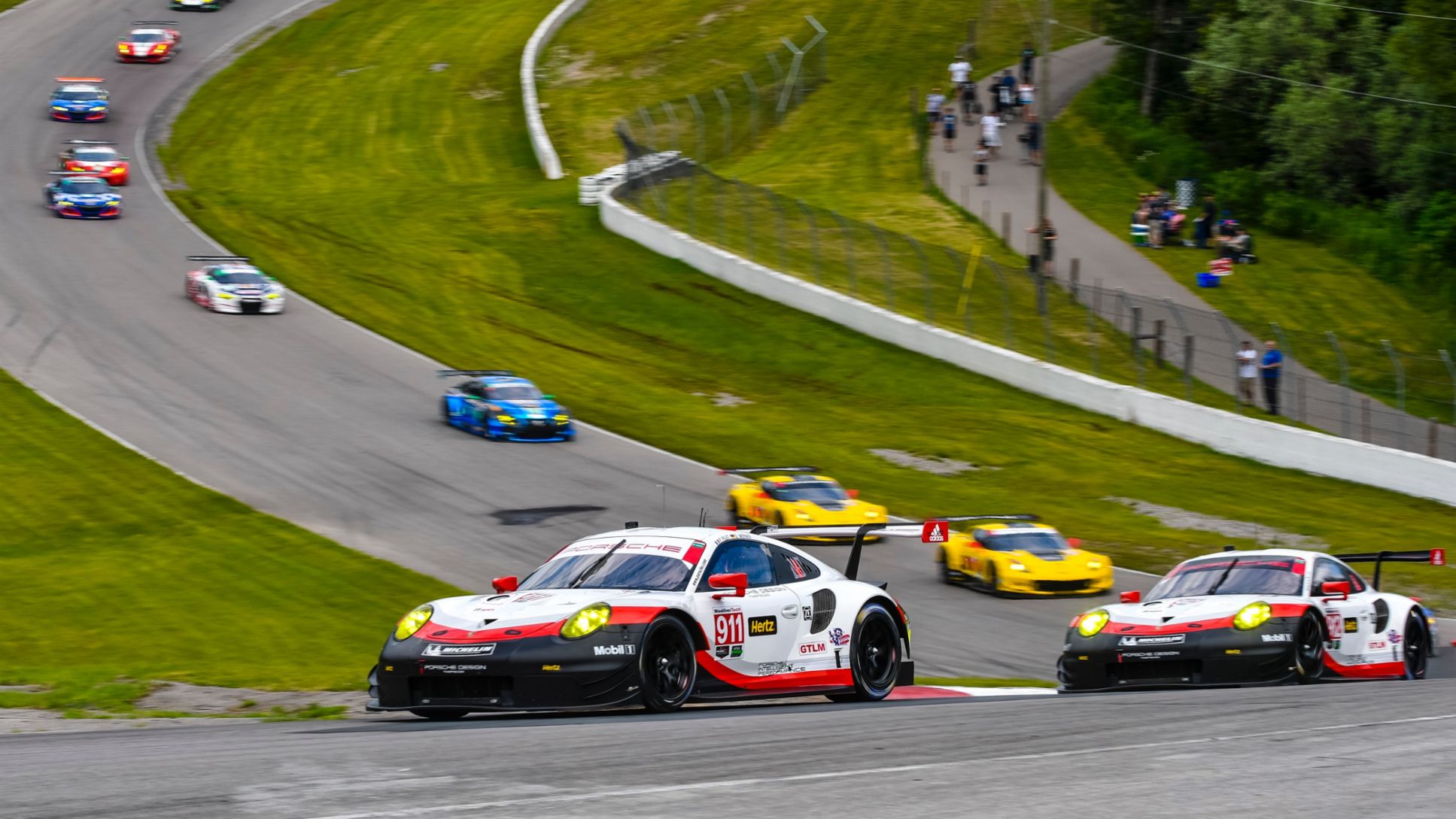 Patrick Pilet had excellent chances to clinch the first victory with the 911 RSR at the IMSA race in Bowmanville, when he lost power just nine minutes before the finish and was forced to park his car in the pits.

Signs for the new Porsche 911 RSR’s maiden victory could not have looked more promising: In qualifying for round six of the IMSA SportsCar Championship at the Canadian Tire Motorsport Park, Dirk Werner (Germany) posted the very first pole position with the 510 hp race car, which Porsche Motorsport at Weissach designed from scratch for this season. In the race, his teammate Patrick Pilet (France) turned the fastest lap in the GTLM class on the high-speed circuit close to the metropolis of Toronto. And with one fast and flawless pit stop, the Porsche GT Team managed to catapult the #911 Porsche 911 RSR past the frontrunner and into the lead in the final phase of the fiercely contested race.

The strong performance of the drivers and the team, however, was not rewarded. Patrick Pilet was within striking distance on second place and still had excellent chances to clinch the first victory with the 911 RSR, when he lost power due to a mechanical problem just nine minutes before the finish and was forced to park his car in the pits. The race for the sister 911 RSR (#912) was lost in the first hour of racing on Sunday: Just a few laps after Gianmaria Bruno (Italy) took over the vehicle from Laurens Vanthoor (Belgium), the Italian made an unscheduled pit stop to pick up a new right rear tyre. The time that was lost on this racetrack, where overtaking is virtually impossible, could not be regained against the strong opposition.

For Patrick Pilet and Dirk Werner, everything was initialy running to plan. Heading into the race from pole position, they had to relinquish their lead in the first lap. Putting in a strong drive, they remained within striking distance of the lead. At the beginning of the final race hour, the strategists in the Porsche pits opted for full attack: Via radio, they instructed Patrick Pilet to try everything in his power to close the short gap to the frontrunner over the remaining three laps until the next pit stop – with the idea of catapulting him into the lead with a fast pit stop. It worked: Lap after lap, the Frenchman gained ground until he followed the leader into the pits and rejoined the race in first place with a five-second lead.

When rain set in, at first light before becoming heavier, he had to give up his position at the front, and was initially back in third place. However, with a spirited push, he recaptured second place with just a few laps left to the finish – and was poised to strike for the front again. The hopes of claiming the maiden victory with the new 911 RSR, however, remained unfulfilled.

Marco Ujhasi, Overall Project Manager GT Works Motorsport: “We took up the race from pole. The start was somewhat unusual. There are few things we need to have clarified: why the BMW accelerated before the race had really started. In any case, it was an exciting race in which we put pressure on the frontrunners over large distances. Our 911 RSR was consistently fast and we turned the fastest race lap. Our strategy was good. When it became very difficult to overtake on the racetrack, we concentrated on getting our number 911 car into the lead with an extremely fast pi stop. That worked well and we were five seconds ahead. Unfortunately Lady Luck wasn’t on our side today. At the end of the day, we delivered a very strong performance, and we can build on this. Still, it hurts when you put in such a spirited fight and go home without a podium.”

Patrick Pilet (911 RSR #911): “The entire team did another excellent today, particularly with the superfast pit stop. It wasn’t easy when it started raining in the final phase, because we were running a different tyre compound compared to our opposition. The 911 RSR performed well over the distance. We were the fastest today. Unfortunately it wasn’t enough to achieve our first victory. We’ll try again at Lime Rock.”

Dirk Werner (911 RSR #911): “The race took off with a huge surprise: Normally the pole-sitter decides when the race starts, but two rivals decided against that and accelerated in front of me. I was then running in third during my stint. Our 911 RSR was actually a winning car today; it was as good in the race as it was in practice and qualifying. The pit stops were super. We’re taking a lot of positive things with us, even if the result after what happened in the race is disappointing, of course. But in two weeks we have another chance at Lime Rock.”

Laurens Vanthoor (911 RSR #912): “Right from the beginning this wasn’t a good race for us. We lost one position at the start. Our pace was good enough to match the frontrunners, but it’s very difficult to overtake on this racetrack. We used a different strategy today, but before we could implement it fully, tyre damage threw us back.”

Gianmaria Bruni (911 RSR #912): “It’s a shame how things turned out day. We had a good and very well balanced car. At the first pit stop we decided on a different strategy that felt very promising for us. But then I got a puncture and I had to limp back to the pits over most of the circuit virtually on three tyres. That relegated us to the back of the field – on a track that allows practically no chance to overtake. But we don’t give up, we’ll keep fighting.”

All results and points’ standings of the IMSA WeatherTech SportsCar Championship can be found in the internet on results.imsa.com.

Round seven of the IMSA SportsCar Championship will be contested on 22 July at Lime Rock in the US State of Connecticut.