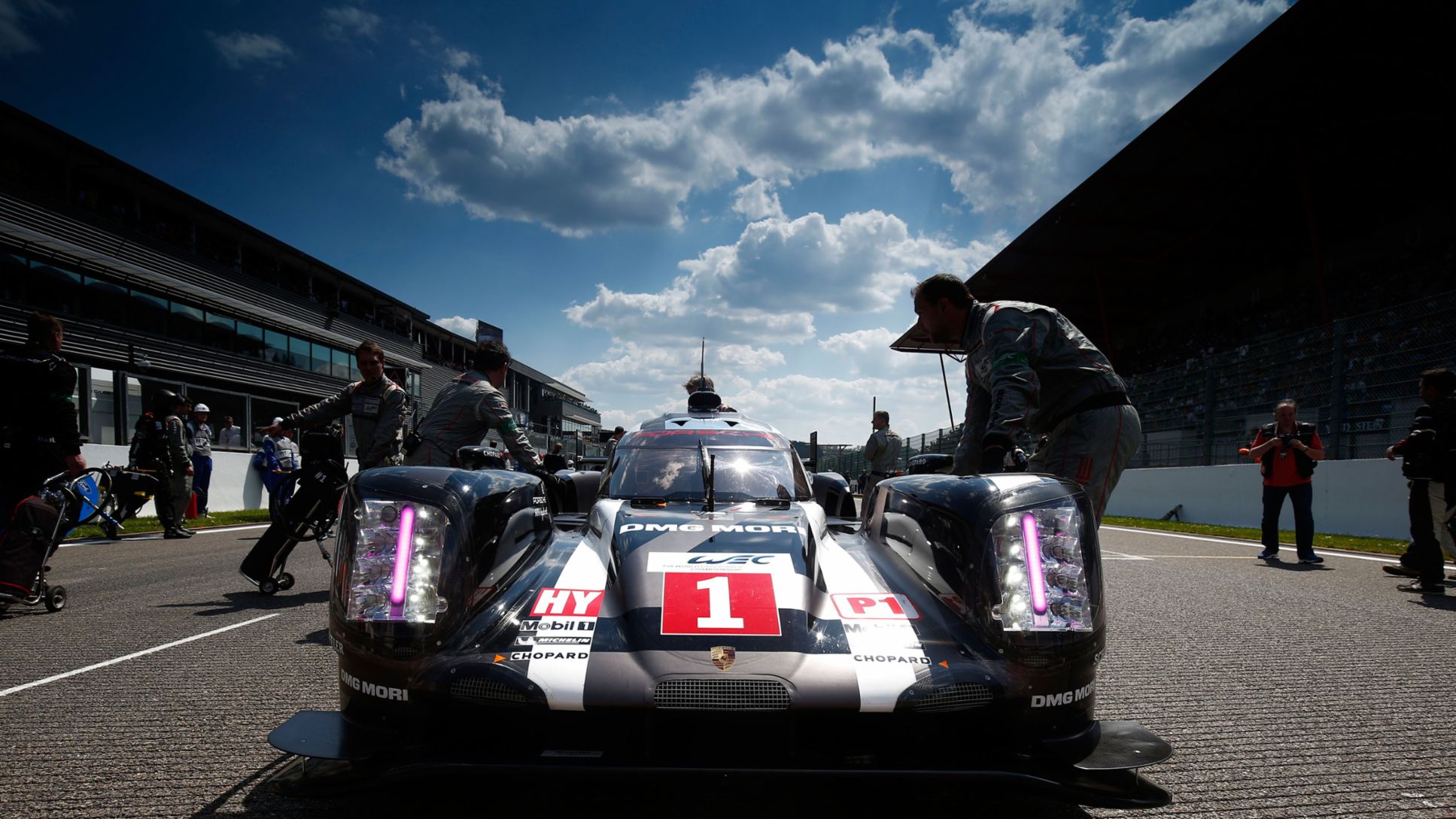 How the technology of the 919 Hybrid works

This weekend the Porsche Team appears with the Le Mans Prototype Porsche 919 Hybrid at the WEC six-hour race at the Nürburgring. Insights into the technology of the LMP1 race car.

This weekend the Le Mans Prototype Porsche 919 Hybrid has its only 2016 appearance in Germany. At the fourth round of the FIA World Endurance Championship, the series’ leader fights for points for its title defence. At the same time its mission is the technology of future sports cars.

With the 919 Hybrid, Porsche has developed a new field of technology at racing speed. For the “Mission E”, a fully electric road-going concept sports car unveiled in 2015, the designers adopted the 800-Volt technology from the prototype racer. Porsche has exhausted all possibilities in designing the two-time Le Mans winner – especially in terms of the drive concept. It consists of the two-litre, V4 turbocharged petrol engine, the most efficient combustion motor that Porsche has built up to now, and two different energy recovery systems.

During braking, a generator at the front axle converts the car’s kinetic energy into electrical energy. In the split exhaust system, one turbine drives the turbocharger while another converts surplus energy into electrical energy. The braking energy contributes 60 per cent, with the remaining 40 per cent coming from exhaust gas. The recuperated electrical energy is stored temporarily in a lithium-ion battery and feeds an electric motor on demand. “On demand” means: the driver wants to accelerate and calls up the energy at the press of a button. In accordance with the latest regulation changes, the power from the combustion engine is just under 368 kW (500 HP), and the output from the electric motor is well over 294 kW (400 HP).

The use and interplay of these two energy sources require a sophisticated strategy. In every braking phase, energy is won – that is, recuperated. On the Nürburgring’s 5.148-kilometre Grand Prix circuit this happens 17 times per lap, before every corner. The amount of recovered energy depends on the severity of the braking manoeuvre, or in other words, the speed at which the driver arrives at the corner and how tight it is. Braking and recuperation last until the apex of every corner, the driver then accelerates again. In this moment, the aim is to utilise as much energy as possible. Hence, the driver steps on the throttle pedal using fuel energy, and also “boosts” electrical energy from the battery.

While the combustion engine drives the rear axle, the electric motor takes care of the front axle. The 919 catapults out of the corner without any loss of traction using all-wheel drive – and in the process recuperates energy again because on the straights the extra turbine in the exhaust tract is hard at work. At constantly high engine speeds, the pressure in the exhaust system increases rapidly and drives the second turbine connected directly to an electric generator. Both energy sources, however, are limited by the regulations: a driver may not use more than 1.8-litres of fuel per lap and no more than 1.3 kilowatt hours (4.68 megajoules) of electricity. He must calculate this carefully so that at the end of the lap he has used exactly this amount – no more, no less. He who uses more is penalised. He who uses less, loses performance. He must stop “boosting” and lift his foot off the throttle at exactly the right moment.

Converted to the 13.629-kilometre lap of Le Mans, which is the scale model for the regulations, the amount of electrical energy allowed is 2.22 kilowatt hours. This corresponds to eight megajoules – and that is the highest energy class stipulated in the regulations. Porsche was the first and in 2015 the only manufacturer that dared to push the limits so far. In 2016 Toyota is also competing in the eight megajoule class. Audi uses six megajoules. The WEC regulations almost completely balance these differences.

For the concept choice for the Porsche 919 Hybrid a very close look at the individual alternatives was taken. There was no question that Porsche would use the braking energy at the front axle as this means a huge amount of energy from areas already partially developed combined with massive progress. For the second system brake energy recuperation at the rear axle or through utilising exhaust gas were considered. Two aspects pointed in favour of the exhaust solution: Firstly weight, and then efficiency.

With brake energy recovery, the system has to recuperate energy within a very short space of time, which means coping with a lot of energy, but at the expense of weight. The acceleration phases, however, are much longer than the braking phases, which allow a longer period of recuperation and make the system lighter. Plus with the combustion engine the 919 already has a drive system on the rear axle. Even more power at the rear would have generated more inefficient wheel spin. Moreover, this leads to heavy tyre wear.

Porsche was opting for 800 Volts

Arguably Porsche’s bravest decision for the hybrid system of the 919 was opting for 800 Volts. Establishing the voltage level is a fundamental decision in electric drive systems. It influences all else – the battery design, electronics design, e-motor design and charging technology. Porsche pushed this as far as possible.

It was difficult to find components for this high voltage, particularly a suitable storage medium. Flywheel generator, supercapacitors or battery? Porsche chose a liquid-cooled lithium-ion battery, with hundreds of individual cells, each enclosed in its own cylindrical metal capsule – seven centimetres high and 1.8 centimetres in diameter.

Power density and energy density must be balanced

In both a road and racing car, power density and energy density must be balanced. The higher the power density of a cell, the faster energy can be recharged and released. The other parameter, energy density, determines the amount of energy that can be stored. In racing, the cells – figuratively speaking – must have a huge opening. Because as soon as the driver brakes, a massive energy hit comes in, and when he boosts it must leave at exactly the same speed.

An everyday comparison: If an empty lithium-ion battery in a smartphone had the same power density as the 919, it would be completely recharged within a lot less than a single second. The downside: A brief chat and it would be empty again. So that the smartphone lasts for days, the energy density has priority, and that means storage capacity.

In an electric car for everyday use, storage capacity translates into range. In this regard, the requirements of the racing car and a road-going electric car therefore are different. But with the 919 Porsche has advanced into regions of hybrid management that were previously unimaginable. The 919 served as the testing lab for the voltage level of future hybrid systems. Important basic knowledge was discovered during the LMP1 programme. Such as cooling for the energy storage (battery) and the electric motor, the connection technology for extreme high voltage as well as the battery management and the systems’ design. From this experience, the colleagues in production development gained important expertise for the four-door concept car Mission E with 800-Volt technology. From this concept car a series product will appear by the end of the decade to become the first purely electric driven Porsche.