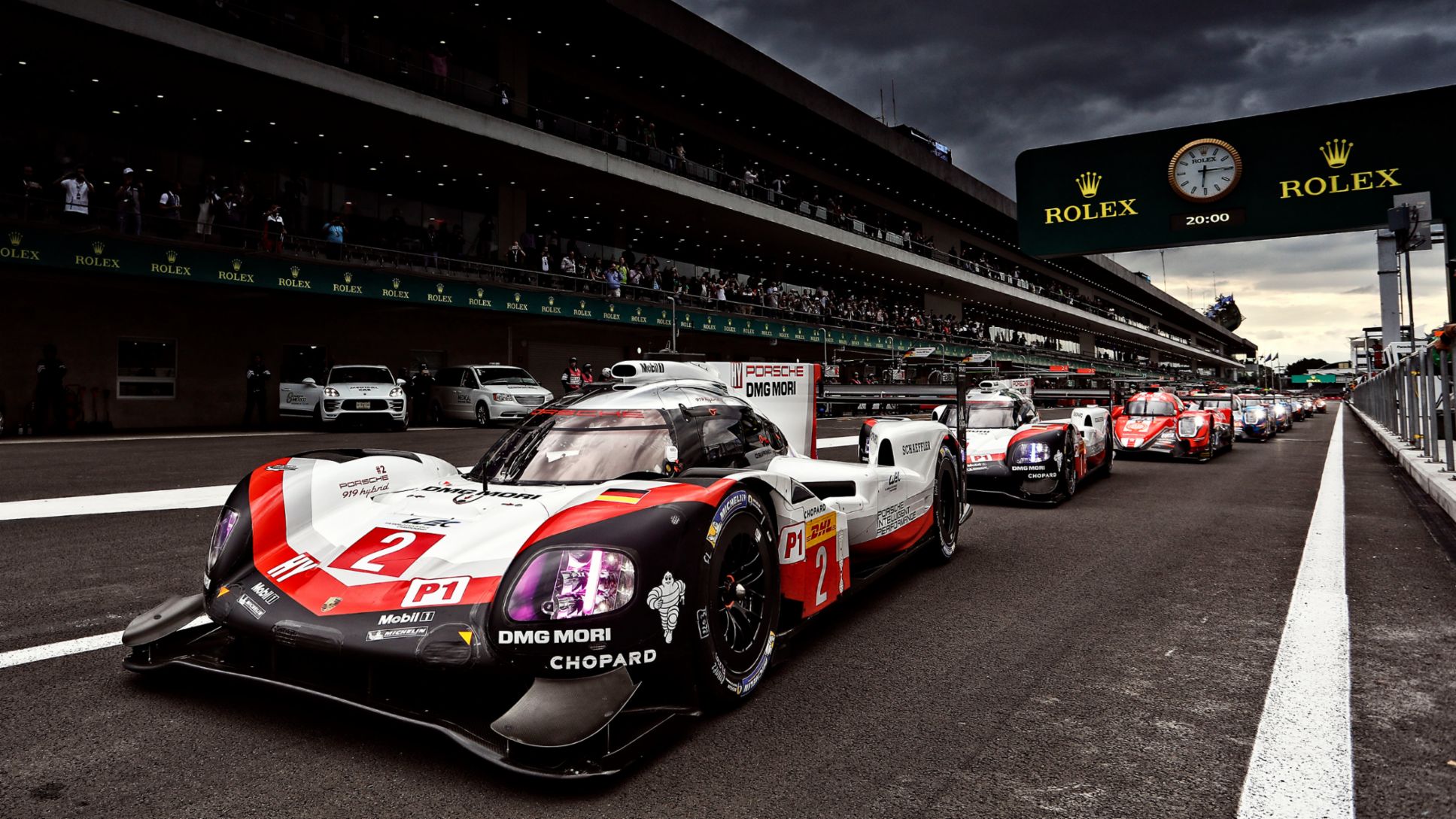 FIA World Endurance Championship (WEC): Both Porsche 919 Hybrids will start from the front row of the grid in Sunday’s six-hour race at the Autódromo Hermanos Rodríguez in Mexico City. Pole position in the GTE-Am class went to the Dempsey Proton Racing customer team with the Porsche Young Professional Matteo Cairoli.

It is the 17th pole position for the Porsche 919 Hybrid since its debut in 2014 and the second this year after Jani and Lotterer had been fastest in the Spa qualifying. The last front row lock-out for Porsche dates back to the 2016 Le Mans 24 Hour race.

In the WEC, the average of the two fastest laps of two drivers counts for the qualifying result. Bernhard/Hartley achieved an average time of 1:24.562 minutes for car number 2. Lotterer/Tandy in car number 1 managed a time of 1:24.710 min. Hartley set the outright fastest qualifying lap of 1:24.459 minutes which topped last year’s best time of 1:24.763 minutes set by Lotterer in an Audi.

In the second free practice this morning, the two Porsches topped the time sheets before finishing second and fourth in FP3 which was held shortly after noon. Both sessions were held on a dry track. It was also Hartley who had set the overall best lap of all practice sessions, a 1:25.007 minutes this morning.

Fritz Enzinger, Vice President LMP1: “After an impressive performance in all three practice sessions, another great team effort led to a front row lock-out. This means the best possible situation for the start of the race in which we hope to take another step closer to our aim of title defence.”

Andreas Seidl, Team Principal: “A dream result for us and the first all-Porsche front row since Le Mans 2016. This amazing outcome rewards the entire team for the hard work of the past few weeks. Contrary to all predictions, the track stayed dry for the majority of the day. Team and drivers made a perfect job, both cars got through qualifying with one set of tires each. But the pole position is just a snap shot, the six hours tomorrow will be tough. The weather forecast is very unstable and that could provide more challenges for us. But we feel well prepared and are looking forward to the race now.”

Neel Jani (33, Switzerland): “Our 919 feels quite good, I think we are ready for the race. We used the practice sessions for tyre comparison and evaluation, which is important for a race that may prove unpredictable especially regarding the weather situation. Starting the race with both Porsches on the front row is obviously an ideal situation.”

André Lotterer (35, Germany): “This is a top result for the whole team. Of course I would have preferred to take pole but apparently it wasn’t easy for Nick to get the tyres up to temperature. I took over with the same set and can quite understand that. The fact we used only a single set obviously is good for the race. Already in free practice our two cars looked good compared to Toyota. The circuit lay-out suits our 919 very well, allowing us to lap very efficiently.”

Nick Tandy (32, Great Britain): “It is the best possible result for the team. Whoever occupies the front row always has the chance to control the race. I’m very happy. It was good for me to have some dry running earlier today in free practice. The circuit is new to me and it was good to get some more track knowledge as well as working on the car. The track is very difficult for traffic management. I also talked to our colleagues in the GT cars and they say it is the same for them. It seems the nature of the turns in the middle of the lap makes it very difficult for the classes to interact together.”

Earl Bamber (27, New Zealand): “Our car looks really strong and it is going well also on long runs. We have a few things to tidy up on and we need to keep pushing because it is close with Toyota. I’m very much looking forward to the race.”

Timo Bernhard (36, Germany): “We had done some set-up changes in FP3 and it appears these worked well. Brendon set a very good lap time in qualifying and I was under pressure to deliver in order not to upset the team! My lap was almost completely clean and I’m very pleased we have achieved another pole position for Porsche. This is only a small step compared to the race but a great injection of self-confidence and a huge motivation.”

Brendon Hartley (27, New Zealand): “It was a really good qualifying for us. I was in the car first and went quickest. But Toyota were actually a lot closer than expected, apparently they were hiding some pace in free practice. Timo finished qualifying off for our car and we used only one set of tyres to keep our options for the race. Tomorrow the weather is difficult to predict but today we are happy to get one more point.”

At the qualifying for the six-hour race in Mexico City, the Porsche GT Team focused on preparing for the fifth round of the Sports Car World Endurance Championship WEC on Sunday. In the Autódromo Hermanos Rodríguez, Michael Christensen (Denmark) and Kévin Estre (France) clocked the sixth fastest time in the GTE-Pro class at the wheel of the newly developed 911 RSR with the starting number 92. Their teammates Richard Lietz (Austria) and Frédéric Makowiecki (France) claimed the eighth grid spot in the #91 car.

The race starts on Sunday, 3 September, at midday local time (19.00 hrs CEST). The TV channel Sport 1 broadcasts from 18.30 to 01.20 hrs live. The race can also be viewed free-of-charge via live streaming on Sport1.de. On pay-TV, the race can be watched from 18.45 to 01.15 on Motorsport.TV. The FIA WEC app is free in its basic version, and offers live streaming of the complete race as well as the time-keeping for a fee.