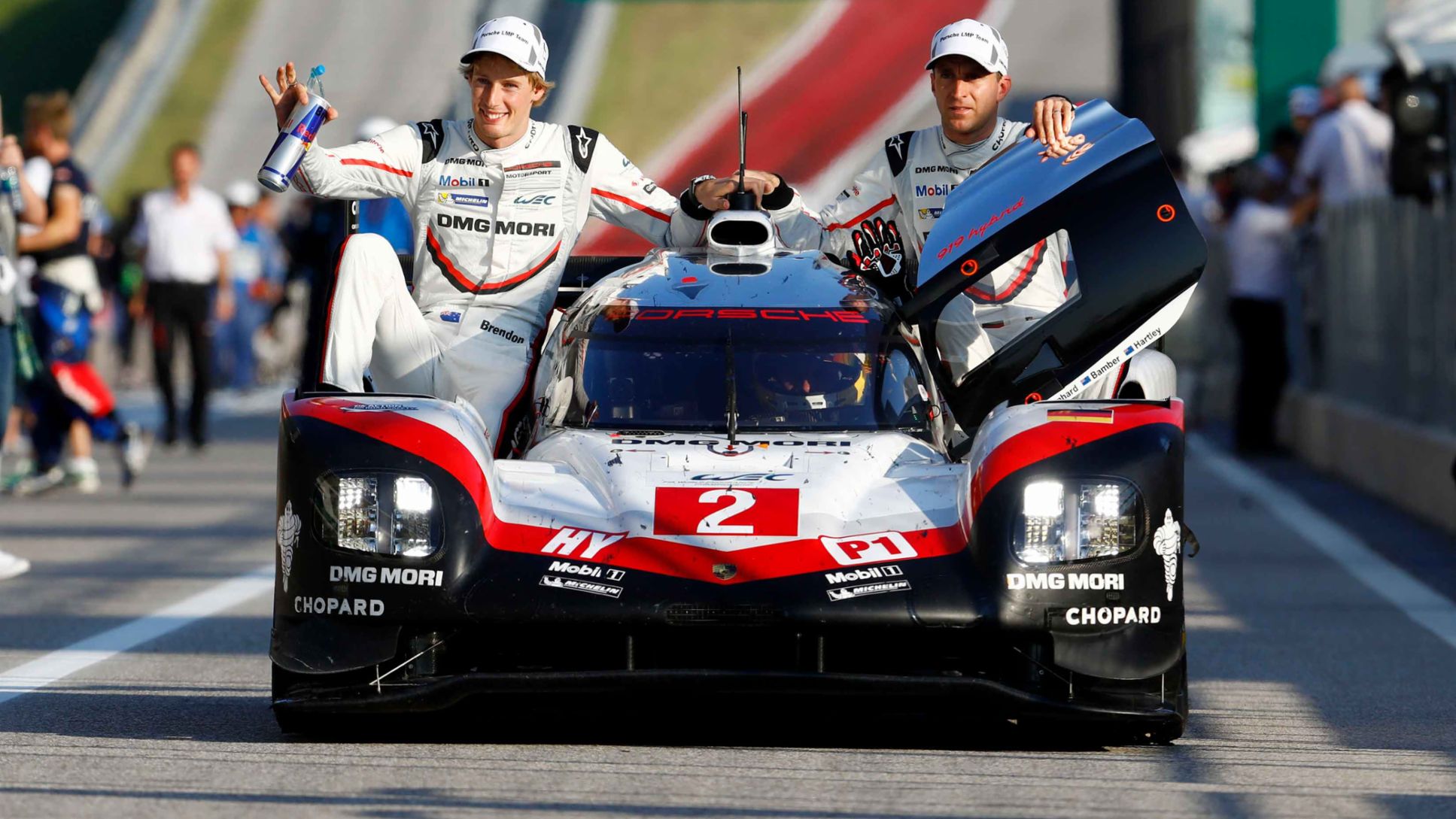 Earl Bamber (NZ), Timo Bernhard (DE) and Brendon Hartley (NZ), the championship leading Le Mans winners, crossed the line first at the Circuit of The Americas. The sixth round of the FIA World Endurance Championship (WEC) was a hot six-hour race with up to 33 degree Celsius ambient temperature and 40 degree Celsius track temperatures. The reigning world champion Neel Jani (CH), André Lotterer (DE) and Nick Tandy (GB) finished second. This trio had started from pole position and led for most of the race before letting the sister car ahead in the closing stages which is better placed in the championship. Jani achieved the fastest race lap in 1:47.149 minutes on lap 9 of 192. Toyota’s prototypes were strong opponents.

The result marked the Porsche 919 Hybrid’s 17th race win and the seventh one-two victory since its debut in 2014. Furthermore, it now has eleven fastest race laps to its tally. Porsche aims to complete the innovative prototype’s career in a perfect manner in its final season this year. Having won the Le Mans 24-Hours three years in a row, the team is aiming to achieve a third consecutive world championship title for manufacturers and drivers. Porsche has now scored 242 points in the manufacturers’ world championship with Toyota on 168.5 points. In the drivers’ rankings, Bamber/Bernhard/Hartley (159 points) have extended their lead over the best placed Toyota drivers (108 points). Jani/Lotterer/Tandy lie fourth in the championship (90 points). Due to the excessive heat, the maximum consecutive time for a driver at the wheel was limited to 80 minutes from the regulations. This made it clear before the start that no double stints would be possible. The 919 Hybrid could do 30 laps with one fuel fill which lasted approximately 57 minutes. The seventh of nine WEC rounds will take place on October 15 in Fuji, Japan.

Jani starts from pole position and builds up a solid lead of more than ten seconds. After 30 laps he hands over to Lotterer who gets fresh tyres. Because the Toyotas don’t change tyres at their first stops, Lotterer drops back to third. From lap 47 to 52, he is embroiled in a tense battle with José Maria Lopez in the number 7 Toyota that Lotterer wins to continue in P2. At the next stop after 60 laps, Tandy takes over. He continues on the same set of tyres and leads the race for his entire stint. After 91 laps, Jani is behind the wheel again. He gets fresh tyres but retains the lead. After 123 laps, Lotterer jumps into the leading car once more and continues on the used tyres. Shortly before the next stop, he gets touched by the number 7 Toyota (Kamui Kobayashi) but both cars continue. After 153 laps, Lotterer hands over to Tandy. After leaving the pits, he is overtaken by the sister car and continues in P2. During the last round of pit stops – Tandy refuels at the end of 174 laps, Tandy leads again. At the end of a highly exciting race, with four laps to go he lets the sister car pass with the championship in mind.

Bernhard starts from P2 but loses two positions on the first lap to the Toyotas. At the first stop after 29 laps, Hartley takes over and gets new tyres. Because Toyota do not change tyres, Hartley drops to fourth before overtaking the number 7 Toyota with Lopez at the wheel on lap 53. After 59 laps, Hartley hands over the third placed car to Bamber. He continues on used tyres, now in P2 again after Toyota has a longer stop for tyres. Moments before the end of Bamber’s stint, Kobayashi gets ahead of him but Bamber successfully fights back and regains P2. After 90 laps, Bernhard is back in the car and on fresh tyres. Once again he drops back to P4 because the Toyotas refrain from a tyre change this time. From lap 97 to lap 100, the safety car is on track and all gaps disappear. On lap 104, just after mid distance, Bernhard successfully closes down Mike Conway in the number 7 Toyota. When Toyota changes tyres, the Porsches are up in front again. Hartley takes over after 121 laps in P2. After 151 laps, Bamber is back behind the wheel. On lap 154, he overtakes the sister Porsche for the lead. After 173 laps, he comes for the final stop for refuelling and is now second, less than ten seconds behind the leader. On lap 188 of 192, the sister car hands the race win to him.

Fritz Enzinger, Vice President LMP1: “Our fourth consecutive race win is the result of a hard fight as Toyota was a strong competitor. It was a difficult race in incredible heat. Thanks to Porsche, the LMP team at home and here at the race track as well as to our tremendous drivers. We have again moved closer to our target: to defend both championship titles.”

Andreas Seidl, Team Principal: “After the pole position yesterday, the crew of the number 1 Porsche produced a superb race today. There is no doubt they deserved the race win. Congratulations to the team of the 919 Hybrid number 2, they made the next step towards the title win. Today we experienced a very, very close race with Toyota. Thanks to an errorless and perfect performance of drivers and team, faultlessly working cars and the right decisions at the right time, we managed the day despite the high temperatures. Our joint hot weather test with tyre partner Michelin in Barcelona paid off. For the entire weekend, we’ve had the better package. Now we are preparing for Fuji, where we expect another close battle with Toyota.”

At the six-hour race in Austin, the newly developed Porsche 911 RSR put in a spectacular chase through the field. At Saturday’s race on the Circuit of the Americas, Michael Christensen (Denmark) and Kévin Estre (France) ploughed their way from the last grid spot to finish second in the fiercely contested GTE-Pro class with the 510 hp racer from Weissach. They were just five seconds shy of clinching the first victory in the Sports Car World Endurance Championship season. For the pair, this marked the best result of the season so far. In a gripping heat race with temperatures reaching 35 degrees Celsius, their teammates Richard Lietz (Austria) and Frédéric Makowiecki (France) were thrown back by two drive-through penalties. Driving the second 911 RSR fielded by the Porsche GT Team, the two finished on sixth place.

The 911 RSR put in a brilliant start on the 5.513-kilometre Grand Prix circuit not far from the Texas capital. Kévin Estre, who had to take up round six of this year’s WEC from the back of the GTE-Pro field after a difficult qualifying session, immediately overtook four competitors and returned after the first lap running in fourth. Starting from the seventh grid spot, Frédéric Makowiecki stayed glued to his bumper and gained two positions. After the first safety car phase in the third hour of racing, Kévin Estre swept into the lead with a spectacular overtaking manoeuvre.

Despite having to relinquish the lead, the #92 Porsche 911 RSR remained on course for a podium result over the rest of the race. Delivering a strong performance and a swift pit stop in the closing phase of the race, Michael Christensen moved into second place. Suddenly, the first victory for the new 911 RSR in the Sports Car World Endurance Championship WEC seemed imminent. However, at Austin victory remained just out of reach. After 167 thrilling laps, the vehicle was just a little over five seconds off winning in the heat of Texas. Nevertheless, the completely new 911 RSR designed by Porsche Motorsport for this season on the basis of the high-performance 911 GT3 RS sports car, still notched up its fifth podium result at the sixth round of this year’s WEC.

The team colleagues Richard Lietz and Frédéric Makowiecki could not be a part of the fight for podium spots. Despite all their efforts, two drive-through penalties – for a breach of the circuit boundary line and due to a wheelspin while leaving the pits – cost time which they could not regain with the #91 Porsche 911 RSR. Regardless, sixth place was enough for them to defend their second rank in the GT Drivers’ World Championship.

Marco Ujhasi, Director GT Factory Motorsports: “This is a sensational result. Our number 92 racer took up the race as a backmarker and missed out on winning by a few seconds. That showed a strong team effort. Our systematic preparations for the race paid off. We’ve still obviously got a lot to do. We’ll keep up the hard work and we’re looking forward to the rest of the season.”

Round seven of the Sports Car World Endurance Championship WEC will be contested in Fuji/Japan on 15 October.