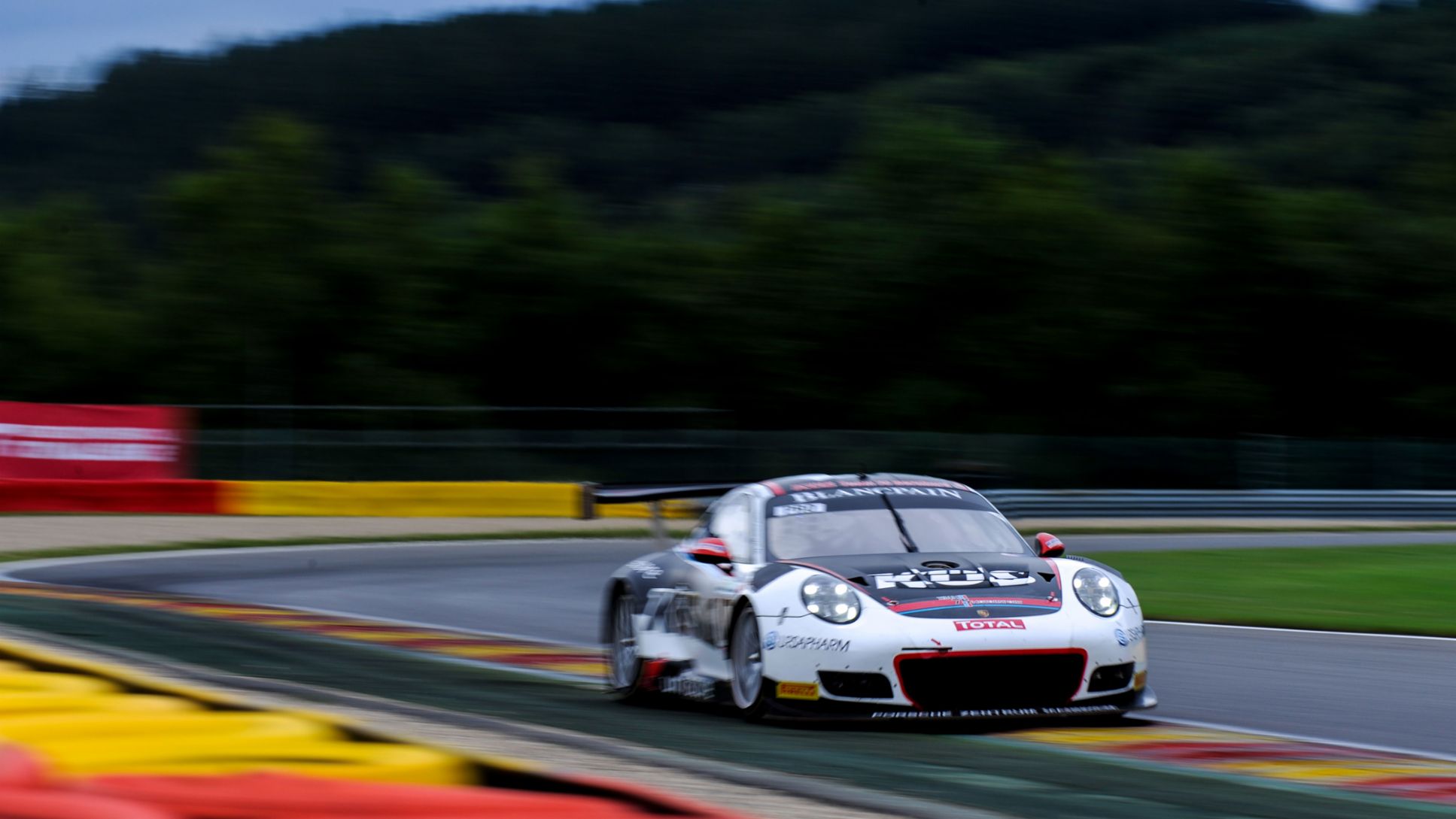 The Porsche 911 GT3 R fielded by KÜS Team75 Bernhard takes up the long-distance classic at Spa-Francorchamps from fourth place.

In Friday’s Super Pole – the final qualifying session for the 20 best vehicles – local hero Vanthoor (Belgium) clocked the fourth quickest time with 2:17.674 minutes. In the evenly-balanced field, the 500 hp 911 with the starting number 117, which Vanthoor shares with Kévin Estre (France) and Michael Christensen (Denmark), again improved on Thursday’s qualifying time and takes up this year’s 24 Hours of Spa perfectly prepared.

The #912 Porsche 911 GT3 R campaigned by Herberth Motorsport narrowly missed out on the Super Pole qualifying. Nevertheless, the Porsche Young Professional Mathieu Jaminet (France), who shares driving duties with Sven Müller, Ralf Bohn (both Germany) as well as Daniel Allemann (Switzerland), was the second fastest qualifier in the Pro-Am category and has excellent prospects to lock out a podium spot.

Comments of the Super Pole

Timo Bernhard, team owner KÜS Team75 Bernhard: “I’m very pleased to head into the 24-hour race from the second grid row. The team did a great job. Laurens drove brilliantly in the Super Pole, Michael and Kévin did a lot to optimise the car in the qualifying. Now we have to switch to racing mode, the hard work is still ahead of us.”

Laurens Vanthoor (911 GT3 R #117): “I’m completely satisfied. The team were fantastic and the second grid row is a good starting position for the race. We encountered a lot of traffic in qualifying, but whenever we get a clear run we’re very fast. You saw this today.”

Michael Christensen (911 GT3 R #117): “That was a great performance from Larens and the entire team. We wanted to push in qualifying so that we could grab a spot as far up the grid as possible. Laurens pulled out all stops with the car today, now we’re turning our attention to the race.”

Kévin Estre (911 GT3 R #117): “Our aim was to be among the top ten. Laurens then managed to turn a super lap. Now we have to show that we can maintain this performance over the 24 hours of the race.”

Laurens Vanthoor (Belgium) planted the Porsche 911 GT3 R fielded by KÜS Team75 Bernhard (#117) on 18th in Thursday’s night session. This makes the local hero and his teammates Kévin Estre (France) and Michael Christensen (Denmark) eligible to fight amongst the 20 fastest vehicles on Friday evening in the pursuit for top grid positions for the long-distance classic at Spa-Francorchamps.

The #912 Porsche 911 GT3 R campaigned by the Herberth Motorsport team delivered a strong performance. Mathieu Jaminet (France) tried everything on the rollercoaster circuit in Belgium’s Ardennes region to make it into the top 20. This would have meant that he and his teammates Sven Müller, Ralf Bohn (both Germany) and Daniel Allemann (Switzerland) could take part in the Super Pole. In the end, the Porsche Young Professional ranked 23rd, one-tenth-of-a-second off joining the top 20.

At the wheel of the second Porsche 911 GT3 R run by Herberth Motorsport, Marc Lieb focused on finding a perfect setup and finished the night qualifying as 38th. On the challenging 7.004-kilometre racetrack, the Spa winner of 2003 is determined to make his mark in the race with his teammates Alfred and Robert Renauer and Jürgen Häring.

Find comments on night qualifying in the press release (downloads).

The three Porsche 911 GT3 R tackled the first qualifying on Thursday in preparation for the important night qualifying at the 2017 24 Hours of Spa. During the night session, the 20 fastest cars will qualify for the Super Pole, which will be held on Friday.

The 911 fielded by the KÜS Team75 Bernhard posted the 15th quickest time in the first qualifying session on the tradition-steeped Circuit de Spa-Francorchamps. With this result, Kévin Estre (France), Michael Christensen (Denmark) and Laurens Vanthoor (Belgium) will secure themselves a spot in the Super Pole, as long as the lap times in the night qualifying are not considerably faster.

In the Pro-Am class, the two Porsche 911 GT3 R run by the Herberth Motorsport team have good chances of making it to the Super Pole. Sven Müller, who shares driving duties in the #912 Porsche 911 GT3 R with Mathieu Jaminet (France), Daniel Allemann (Switzerland) and Ralf Bohn (Germany), clocked the 21st fastest time, a mere four-thousandths of a second shy of the crucial 20th spot. The second Herberth Motorsport entry concluded the first qualifying on position 37. With the extremely close times, the all-German driver lineup of Marc Lieb, Jürgen Häring as well as Alfred and Robert Renauer could make it into top 20 in the night qualifying.

Find comments on qualifying 1 in the press release (downloads).

The squad of the two-time Le Mans winner and team owner Timo Bernhard can rely on the Porsche works drivers Michael Christensen (Denmark), Kévin Estre (France) and Laurens Vanthoor (Belgium). Vanthoor has a wealth of racing experience at his home circuit and won the endurance classic in 2014. One of Herbert Motorsport’s contenders will be manned by Porsche works driver Sven Müller (Germany), Porsche Young Professional Mathieu Jaminet (France) and the amateur pilots Daniel Allemann (Switzerland) and Ralf Bohn (Germany). An all-German driver lineup of Alfred and Robert Renauer, Jürgen Häring and Marc Lieb share driving duties in the sister car. Lieb is the reigning champion of the World Endurance Championship for Drivers, outright winner of the 2016 Le Mans 24-hour race and he climbed to the top of the podium at Spa in 2003.

The 7.004-kilometre circuit of Spa-Francorchamps is known for its high centrifugal forces and legendary passages such as Eau Rouge and Blanchimont. Nestled in the hilly, forested Ardennes region of Belgium, the racetrack often experiences unusual weather conditions with frequent rain. Porsche last won this race in 2010: Victory back then was thanks to Jörg Bergmeister, Wolf Henzler, Romain Dumas and Martin Ragginger in a Porsche 911 GT3 RSR. The “Total 24 Hours of Spa” runs as part of the Blancpain Endurance Series. The presentation of the race cars on Wednesday in a motorcade from the racetrack to the town of Spa has become legendary. 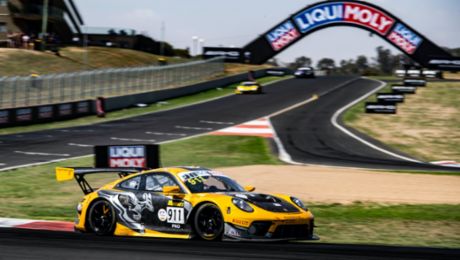