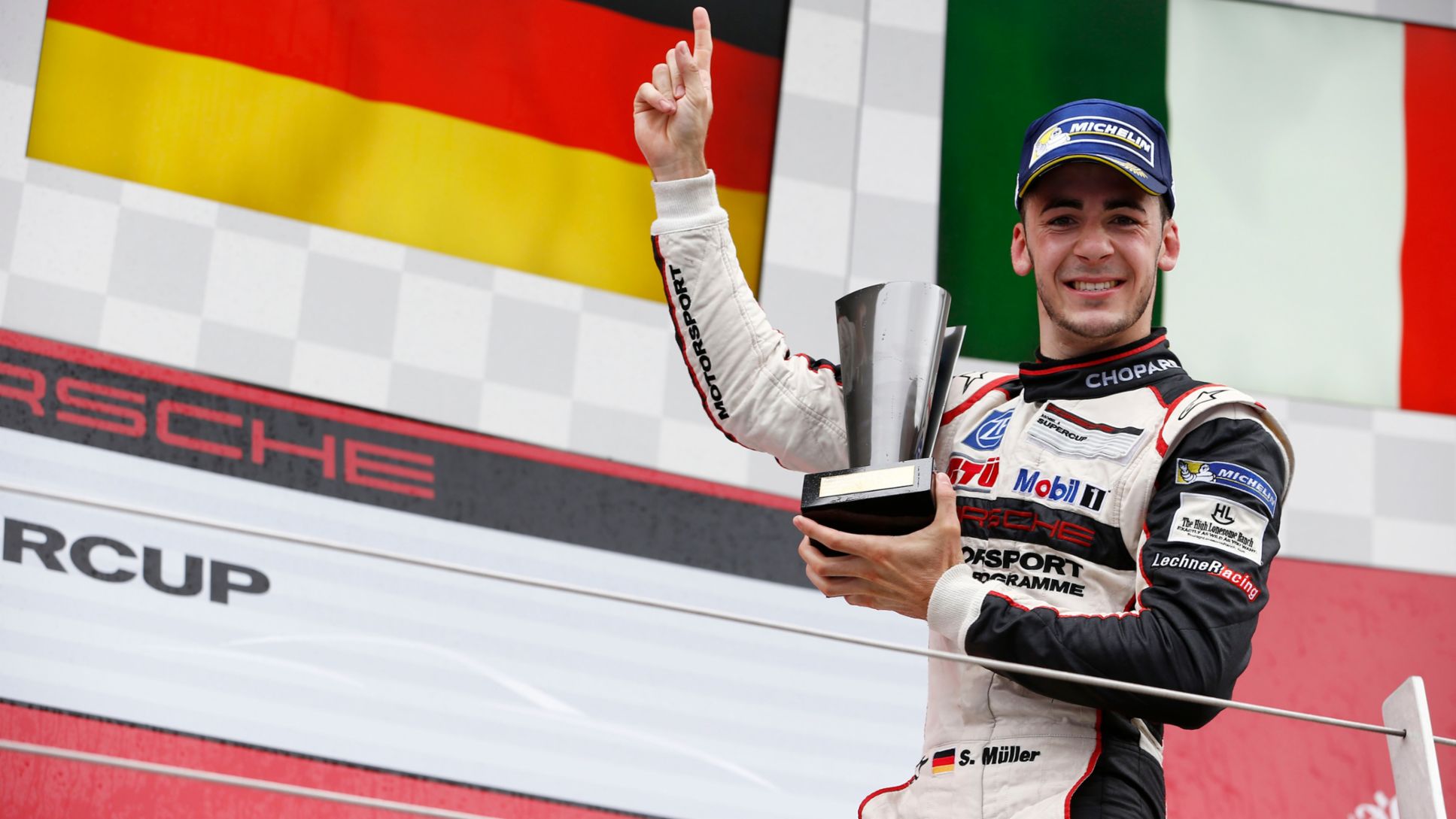 The Porsche junior has given a strong performance at Britain’s Silverstone: The 24-year-old German has put in a frantic sprint to snatch his second win of the season in the Porsche Mobil 1 Supercup.

Sven Müller relegated his junior colleagues Mathieu Jaminet (F/Martinet by Almeras) and Matteo Cairoli (I/Fach Auto Tech) to the second and third podium steps. Chaotic weather with sudden downpours turned the race into a thriller. “What an unbelievable race! I started from third and the conditions with heavy rain were anything but easy. I enjoyed fair duels and we Porsche juniors always kept a safe distance of three metres between us. Mathieu and I drove almost two kilometres side by side and I was a nose ahead at the finish,” said a pleased Müller after the podium ceremony.

Round four of the Porsche Mobil 1 Supercup took off with unexpected turmoil: when the 30 Porsche 911 GT3 Cup cars drove to the prestart, the first drops of rain began to fall. Dark clouds hung low over the 5.891-kilometre racetrack, then as the drivers lined up on the grid the rain began in earnest. At the last moment, the teams hastily switched from dry to wet tyres. The safety car was deployed and all vehicles turned two laps in heavy rain behind the former Supercup driver Bernd Mayländer, who sat at the wheel of the safety car.

When he switched off the lights and pulled into the pits, pole-setter Jaminet set the pace. The 21-year-old Frenchman initially managed to fend off his pursuers, followed by his junior colleagues Cairoli, who had started from second, and Müller. In lap five, Müller overtook Cairoli. “I struggled with heavy oversteer and at times I couldn’t match the pace. Still, a podium spot is always a good result and I’m happy. I’ll be back in fighting form in Budapest and I’ll be going for victory,” said Cairoli.

In the eighth lap, Müller and Jaminet delivered a spectacular duel for the lead. Müller won the sprint and once he took the lead he was able to gradually eke out an advantage on the slowly drying track. Jaminet ultimately had to settle for second place: “My start was good with two fast laps. My fight with Sven over several laps must have been exciting for the spectators, because we were driving side by side over long stretches. I’m still leading the overall classification and I’d be quite happy if it stayed that way after the next races, too.”

Müller and Cairoli have two wins each under their belts so far this season. At four races, Jaminet has climbed the podium three times, secured fourth place once and hence was able to earn points as the most consistent contender in the international one-make series, which has run as support to the Formula 1 since 1993. In the overall classification Jaminet leads with 66 points ahead of Müller with 63 points. Cairoli currently sits third with 56 points.

Round five on the Hungaroring in Budapest/Hungary