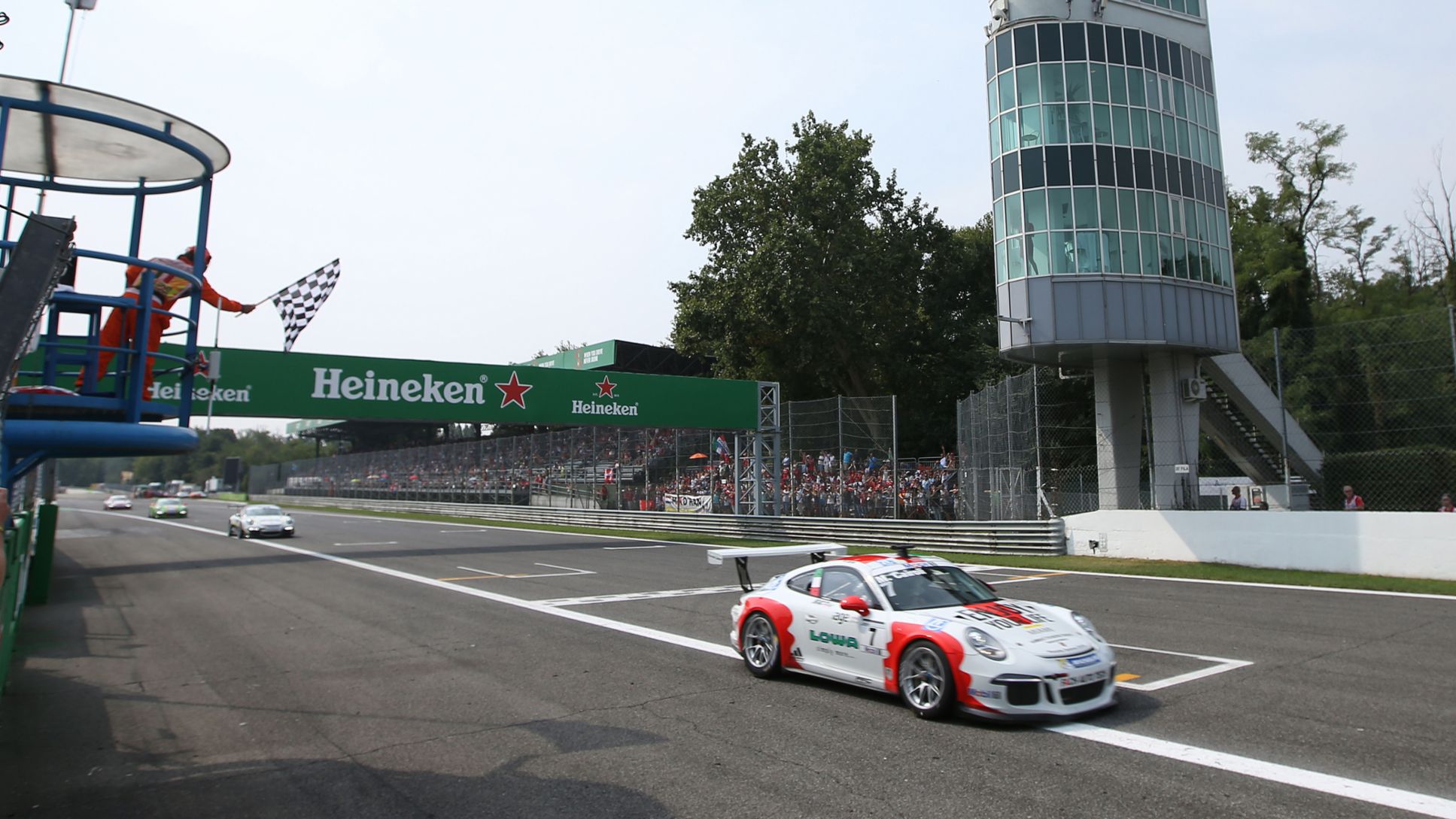 The 20 year old from Italy has succeeded in round eight of the Porsche Mobil 1 Supercup in Monza. Using his home advantage this is his fourth victory of the season after Barcelona, Monaco and Hockenheim.

“It’s always something very special for an Italian to win in Italy. So many of my family, friends and fans have come here to watch me race. When I drove the final lap and turned onto the finish straight it simply felt wonderful. That is my most emotional victory so far,” said Cairoli. Germany’s Michael Ammermüller (Lechner MSG Racing Team) and the Italian guest driver Mattia Drudi (Dinamic Motorsport) saw the chequered flag in positions two and three respectively. Porsche Junior Mathieu Jaminet (F/Martinet by Almeras) was also thrilled with his weekend: with two races left on the calendar, he managed to clinch an early rookie championship title as the best newcomer.

As the 28 cars headed onto the grid it was obvious that the battle for all-important championship points would come to a head in Monza. At the eighth of ten rounds there were two safety car phases after several vehicles collided. Although the drivers involved could walk away from their vehicles it took several laps until the racetrack had been cleared. Cairoli, who tackled the sprint from pole position, did not let the incidents behind him shake his composure. He held his course at the front. Ammermüller who followed in second could not put any pressure on him. “Cairoli didn’t make one mistake and I didn’t get any chances to overtake him,” concluded Ammermüller.

Drudi, who contested the race as a guest driver for the Italian Dinamic Motorsport team, could hardly comprehend his third place: “I can’t believe that I was on the podium. I’m so happy to have achieved this result in such a competitive field. The speed was there and I’m over the moon,” said the 18 year old after receiving the trophy from Dr. Frank-Steffen Walliser, Porsche’s Head of Motorsport and GT Vehicles.

Porsche Junior Jaminet earns the title of the rookie classification

Porsche Junior Sven Müller (D/Lechner MSG Racing Team) came from third place on the grid and was able to defend this position for seven laps. But when the race went green again after the second safety car phase, he made his move to overtake Ammermüller in his Porsche 911 GT3 Cup, braked too late and lost two positions in the manoeuvre. Ultimately, he still managed to salvage fourth place. “The race behind the safety car wasn’t so great because it meant I couldn’t attack. Then I attempted to outbrake Ammermüller in the first corner and it didn’t work. Still, I managed to earn crucial championship points for fourth,” said Müller. Robert Lukas (PL/Förch Racing by Lukas Motorsport) crossed the finish line in fifth followed by Italian Daniele di Amato (Dinamic Motorsport) on sixth.

Position seven for the French Porsche Junior pilot Jaminet was enough to earn him the title of the rookie classification. With 40 points still up for grabs, he managed to snatch an early title from his teammate Steven Palette (F/Martinet by Almeras). “I’ve achieved my first goal of the season and I’m delighted about winning the rookie title. I enjoyed an exciting duel with Jeffrey Schmidt. It was a good and fair fight and it must have been interesting for the spectators. In the overall classification I hope to finish the season on third place,” declared Jaminet.

After the Monza result, the championship now heads into a riveting final phase: Rounds nine and ten of the Porsche Mobil 1 Supercup will be contested in Austin (USA) from 21-23 October. Müller currently leads the overall classification with 135 points, followed by Cairoli a mere two points behind on 133 points. Jaminet ranks third with 106 points.