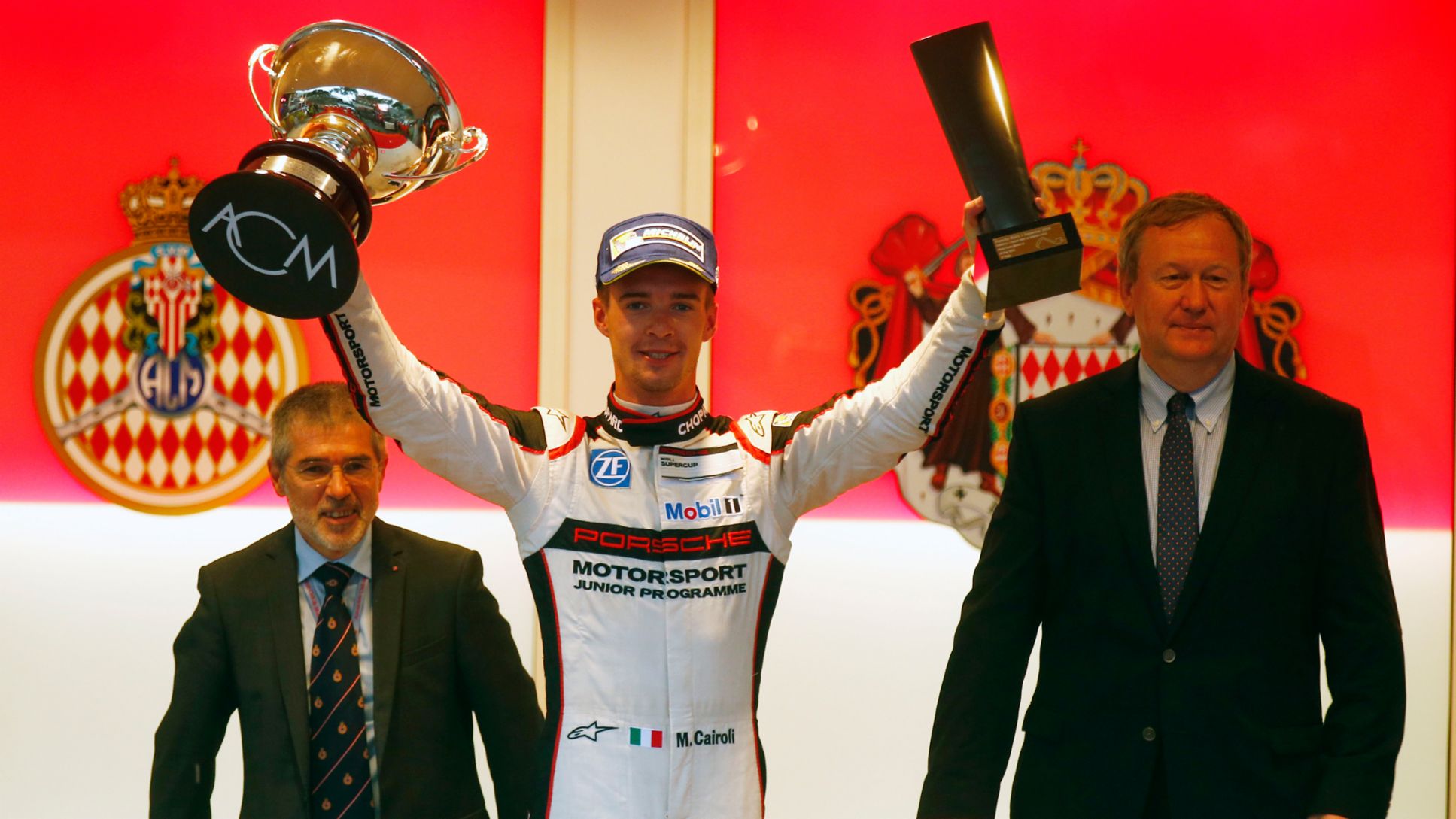 After the season opener of the Porsche Mobil 1 Supercup in Barcelona the Porsche Junior has brought his 911 GT3 Cup home in first place for the second time. The race in Monte Carlo at a glance.

The conditions in Monaco for the second round of the Porsche Mobil 1 Supercup couldn’t have been more challenging: Facing torrential rain, Porsche Junior Matteo Cairoli kept cool, calm and collected to bring his Porsche 911 GT3 Cup home in first place. “To win on this extraordinary racetrack is simply the most wonderful thing in the world! I actually love racing in the rain, but it was really difficult here in Monaco. The rain was so heavy in the last laps that I felt as if I was driving on a water slide,” said an overjoyed Cairoli. Crossing the finish line after 14 laps in positions two and three behind the 19-year-old from the Swiss Fach Auto Tech squad were guest driver Klaus Bachler (A/race: pro motorsport) and Michael Ammermüller (D/Lechner MSG Racing Team). Sunday’s race marked an anniversary for the series: In Monaco, the Porsche Mobil 1 Supercup celebrated its 250th race since its inauguration in 1993.

As the 25 drivers made their way through the urban canyons of Monte Carlo to the start, the streets were already wet from the previous downpours. On the slippery circuit, the safety car led the field over the first two laps until the race was green-flagged for a rolling start. Cairoli immediately pulled clear of Bachler and refused to let the increasingly heavy rain throw him off his mission. The safety car was deployed again briefly in the early stages of the race so that two vehicles could be recovered. Ben Barker (GB/Momo-Megatron Team Partrax) grabbed his chance to close the gap to Ammermüller in third. “Barker was actually faster than me, but, of course, I had to keep him behind me. Sometimes I was nudged but I was able to stay on the track and ultimately climb the podium in third place,” said Ammermüller.

In the 15th lap, Bachler slid into the guardrails while running in second and the race was red-flagged. “The conditions were extremely tricky and when I crashed in the last lap I simply became a passenger,” admitted Bachler, who has contested several rounds of the Porsche Mobil 1 Supercup as a guest driver for the race pro motorsport squad. After the race was stopped, Bachler had to hurry to reach the podium ceremony in time. For such cases, the regulations state that the results of the previous lap are used to determine the results. Hence, Cairoli, Bachler and Ammermüller were awarded the trophies in the Principality of Monaco. This marks Cairoli’s second victory since the season-opening round in Barcelona.

Position four was occupied by Barker, with the French Porsche Junior Mathieu Jaminet (Martinet by Almeras) finishing fifth. “I must admit that I was nervous before the race. This is my first time here in Monaco and then to encounter such rain. But I didn’t scrape any of the walls, I brought the car home in one piece, and I earned critical points for fifth place,” declared Jaminet. Christian Engelhart (D/MRS GT-Racing) crossed the finish line in sixth behind Jaminet.

Porsche Junior Dennis Olsen (N/Lechner MSG Racing Team) seemed satisfied with his guest outing in Monaco. “I attempted to overtake but I didn’t succeed. Still, eleventh place at my Monaco debut is not too bad,” said Olsen. Another Porsche Junior Sven Müller (D/Lechner MSG Racing Team) put in an impressive charge. After a crash during qualifying, the German started from position 25 to take the flag in 13th. “I never imagined I’d yield any points at all today, because everyone knows how hard it is to overtake here in Monaco. I struggled with aquaplaning towards the end. Now I’m looking ahead to the next race in Spielberg. There, the cards will be reshuffled,” said the 24-year-old from Bingen.

Round three on the Red Bull Ring at Spielberg

Round three of the Porsche Mobil 1 Supercup will be contested from 1 to 3 July on the Red Bull Ring in Austria. The circuit at Spielberg is regarded as a demanding rollercoaster racetrack with good chances to overtake.