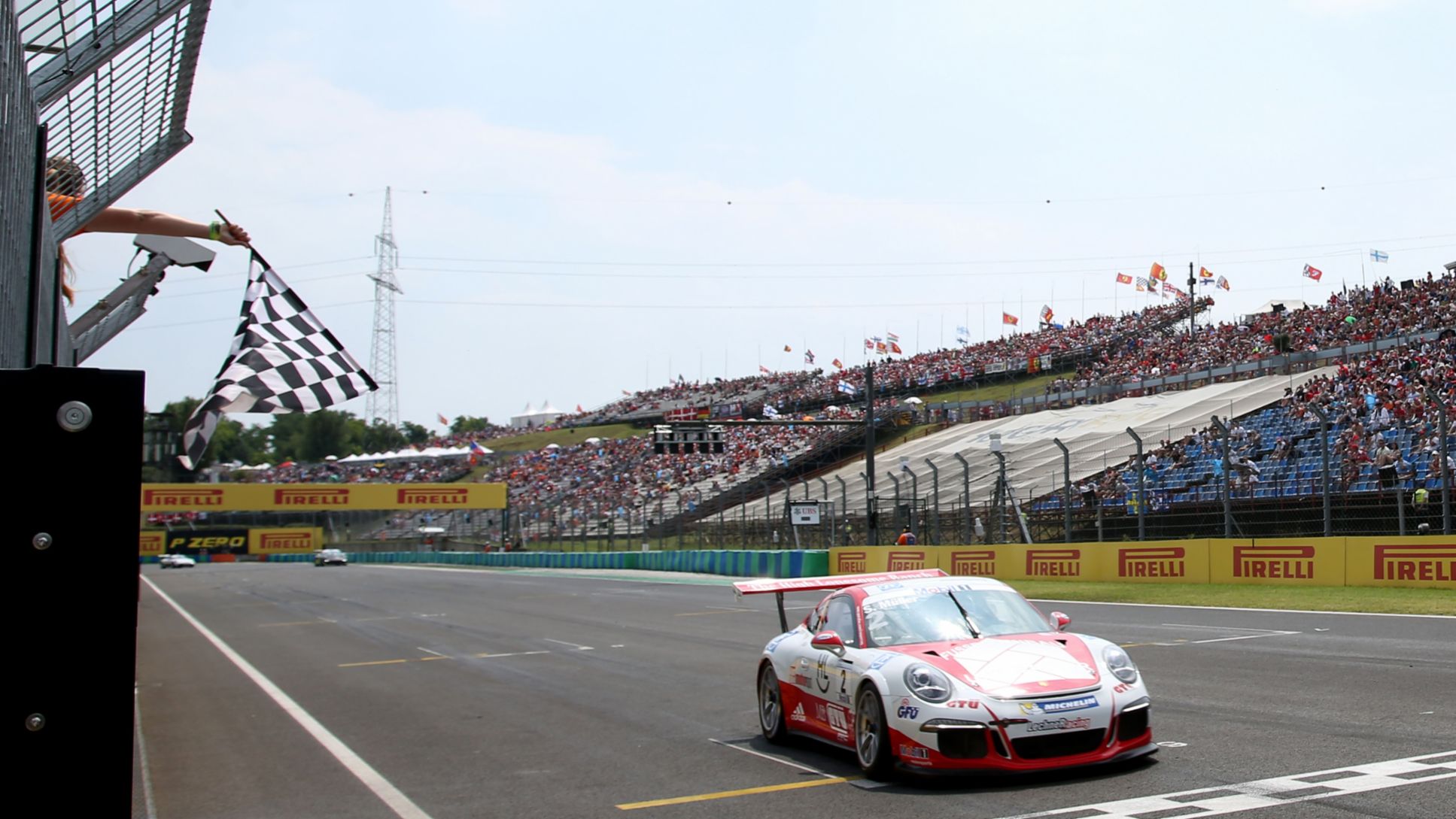 Müller moves into the lead

Porsche Junior Sven Müller has won the fifth round of the Porsche Mobil 1 Supercup at the Hungaroring in Budapest.

With this, the 24-year-old German beat his international rivals on Sunday at the race on the Hungaroring on the outskirts of Budapest. Second and third position went to Robert Lukas (PL/Förch Racing by Lukas Motorsport) and Michael Ammermüller (D/Lechner MSG Racing Team). This gives Müller three wins so far this season and puts him at the top of the championship. “I’m absolutely thrilled with this victory. It was not easy with the long safety car phase right at the beginning of the race. But on the last lap I even managed to turn the fastest lap. That was a great weekend,” said Müller after the podium ceremony.

As support to the Formula 1 event in Hungary, the fifth of ten Porsche Mobil 1 Supercup races was contested in bright sunshine and temperatures of 26-degree Celsius. Lukas took up the race from pole position, but Müller got a better start off the line in his Porsche 911 GT3 Cup and the German pulled ahead of the Pole in the first metres. “I had no answer to Sven today. He managed to pull away after the safety car phase. I didn’t get any pressure behind so I’m thrilled that I could bring home a relatively stress-free podium result,” said Lukas. Ammermüller came from the fourth grid spot to settle in behind Lukas. A crash in the first corner just after the start resulted in four vehicles retiring from the race. The safety car was deployed and stayed out on the track for five laps until the vehicles could be salvaged and the liquids on the circuit were dispersed.

For the rest of the race the tops positions were already sealed. Schmidt pulled into position four ahead of Philipp Frommenwiler (CH/Fach Auto Tech), with the Swiss finally flagged off as fifth. Gripping duels developed behind. Porsche junior Matteo Cairoli (I/Fach Auto Tech) lost three places at the start and fought for critical championship points on sixth place. However, in the eighth lap the Italian was overtaken by his Porsche junior colleague Dennis Olsen (N/MRS GT-Racing). Olsen filled in for Christian Engelhart this weekend, who was prevented from competing due to a conflict of schedules.

The Norwegian took the flag in position six, with Cairoli finishing on seventh. “Matteo got oversteer in the last corner, he drifted a little too wide to the outside and I saw my chance to slip through. You have to use such chances and I’m pleased with sixth place.” Cairoli was disappointed. “I had problems again with my start. I don’t know what’s going on this year. I used to be good at starts. Now I’m feeling pretty annoyed. I have to find out why things are not going as I anticipated. Britain’s Ryan Cullen (Lechner Racing Middle East) occupied eighth place after 14 laps.

Müller moves into the lead with three victories

For Porsche junior Mathieu Jaminet the weekend proved bleak. After he had posted the fastest time in qualifying and sat at the top of the time sheets, a routine inspection found that his car did not comply with the prescribed height. His qualifying time was annulled and he had to take up the race from the back of the field. The Frenchman then caused the hefty crash which heralded the end of the race for four vehicles. “Right after the start I managed to overtake a lot of cars and sprinted to the first corner at quite a speed. Everything was a little chaotic, I went on to the grass and slid into another car. This set off a chain reaction. I can only apologise to the drivers who were affected. I certainly didn’t intend this to happen,” said a visibly contrite Jaminet.

In the overall classification, Müller moves into the lead with three victories and a total of 83 points. Behind him Jaminet ranks second with 66 points. Just one point behind, Cairoli sits third (65 points).

Round six on the Hockenheimring

Round six of the Porsche Mobil 1 Supercup will be contested as support to the Formula 1 weekend on the Hockenheimring Baden-Württemberg from 29 to 31 July. For the German drivers in particular, the race on home turf will be a very special event. Six regular German drivers are entered in the Porsche Mobil 1 Supercup: Sven Müller (Lechner MSG Racing Team) from Bingen, Michael Ammermüller (Lechner MSG Racing Team) from Rotthalmünster, Patrick Eisemann (Förch Racing by Lukas Motorsport) from Denkendorf near Stuttgart, Munich-born Christopher Bauer (Förch Racing), Christian Engelhart (MRS GT-Racing) from Wolnzach and Christof Langer (MRS Cup-Racing) from Lauffen am Neckar.