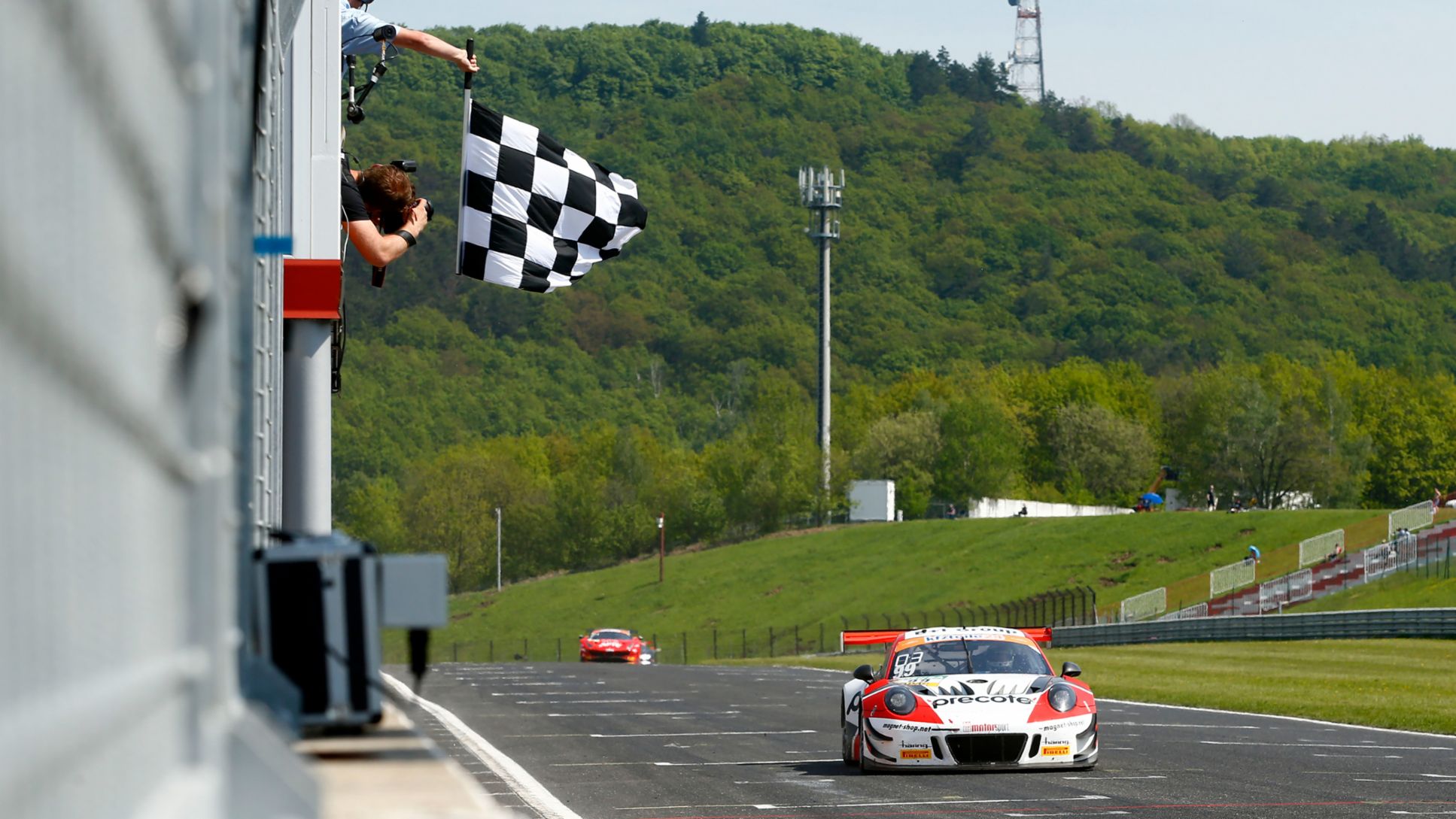 Scoring third at Sunday’s round of the ADAC GT Masters in Most, Czech Republic, the Porsche 911 GT3 R run by Precote Herberth Motorsport remains at the top of the standings.

After finishing yesterday’s race on third, Porsche Young Professional Mathieu Jaminet from France and Germany’s Robert Renauer achieved their second podium result in the still young season. The 911 GT3 R fielded by KÜS Team75 Bernhard and shared by Klaus Bachler (Austria) and Adrien de Leener (Belgium) crossed the finish line as the second best Porsche in 14th. Jan-Erik Slooten (Germany) and Lucas Luhr (Switzerland) made up nine places in the race for their team IronForce by Ring Police and scored critical points in the Trophy classification.

In a gripping fourth race of the championship, which was marked by an early safety car phase and a total of eight retirements, Precote Herberth Motorsport once again managed to claim a podium spot. Jaminet took up the race for the Porsche team from Upper Bavaria from position five. The 23-year-old handed the ca. 500 hp customer sport racer off to his teammate Renauer after 18 laps. Renauer, who has won four GT Masters races in the past, managed to work his way into third place. On the 4.121-kilometre circuit, the 33-year-old defended his position to the flag. “This was a great weekend for our team. Third place enabled us to extend our lead in the championship. My stint started well and I managed to quickly make up one place. The pit stop ran as planned and Robert drove flawlessly. A good qualifying result is very important on such a tight track, as collisions can be common, especially amongst the backmarkers,” said Jaminet.

In summery conditions and a temperature of around 25 degrees Celsius, the 911 GT3 R driven by Bachler and de Leener missed out on earning the first points of the year. The #18 race car took off into round two of the season at Most from the twelfth grid spot. In the turmoil of the 35-strong field, 26-year-old Bachler left the track twice in the first two laps and lost several positions. Thanks to fast lap times, the international driver duo of KÜS Team75 Bernhard advanced to 14th place by the end of the race. “In the qualifying we encountered a lot of traffic during our fast lap. And in the first lap of the race I was forced off the track while exiting the second corner and lost several positions. Shortly afterwards we ended up in the gravel while trying to avoid trouble which cost us more positions. Afterwards we drove consistent laps and had a good pit stop, which enabled us to make up some of those places,” explained Bachler.

The two-time outright Le Mans winner Timo Bernhard became caught up in an accident in the first lap in the second 911 of the Rhineland-Palatinate squad and had to call it a day. “I was nudged into a spin by another driver in the second corner and that was the end of our race. It’s a shame because my start was very good. Our car’s balance wasn’t great and we have to work on this before the next race weekend in Spielberg. We’d like to get back in the points in Austria,” said Bernhard.

After making changes to the setup prior to the qualifying, the 911 GT3 R run by the IronForce by Ring Police team started from the rear third of the field. Putting in a spirited charge, the new GT Masters team made up nine positions to finish the fourth race of the season on 25th. In the Trophy classification, the German team earned important points, which put IronForce by Ring Police second in the amateur class. “Our qualifying didn’t go so well for us, but we improved significantly in the race. I managed to make the most of some confusion at the beginning and overtake some competitors. We were unlucky in the pit stop because another car blocked our path. We had to wait and that cost us time,” explained Luhr.

In a field of 34 cars from eight manufacturers, Porsche Young Professional Mathieu Jaminet and Robert Renauer from Germany crossed the finish line in third place. The 911 GT3 R manned by the world endurance champion Timo Bernhard from Germany and his French works driver teammate Kévin Estre made up eleven positions after a valiant performance to finish on twelfth. In the Trophy category, the Porsche customer team IronForce by Ring Police came third.

In bright sunshine and an outside temperature of around 21 degrees Celsius, Jaminet and Renauer scored the best result of the season so far for the Porsche 911 GT3 R. In a hotly-contested race on the 4.121-kilometre Autodrom Most racetrack, the customer sport racer with the starting number 99 swept over the line in third. Taking up the race from fifth on the grid, start driver Renauer made a cracking start and avoided an accident in the first lap, which took out several cars. He handed the vehicle off to Jaminet in fourth. After the driver change, the Frenchman left the pits in third place in front of a competitor. Jaminet then defended this position to the flag. With this result, the squad from Bavaria moves into the lead of the championship. “I managed to make up a position at the start and through the pit stop we won the decisive spot for the podium. Mathieu did a great job of defending the position, although the car behind him was attacking. We knew that it’d be tight with the tyres towards the end but he made no mistakes and focussed on the race to the finish,” said Renauer.

After ploughing eleven places through the field in the #17 Porsche 911 GT3 R, the two-time outright Le Mans winner Timo Bernhard and Kévin Estre concluded the race outside the points. With the setup and heavy traffic on the track hampering quick lap times during the morning qualifying, the drivers for KÜS Team75 Bernhard started from 23rd on the grid but gained eleven places during the race. “Things didn’t really come together for us during the qualifying. Kévin made a great start and managed to gain several positions. We would have liked to earn a few points, but we couldn’t maintain the speed. For race two we want to find a better balance to keep the tyres at a consistently high level,” explained Bernhard.

The sister car of the team from Bruchmühlbach-Miesau in Germany concluded the 60-minute race on 15th place. Klaus Bachler and Adrien de Leener took up the race from 24th and made up nine positions. “It was chaos at the start with several cars spinning. In trying to avoid the melee I went over a kerb and damaged the underbody. After that, the main thing was to get the car home as well as we could. On Sunday we’ll do our very best in qualifying to start further up the grid,” said de Leener.

In race three of the ADAC GT Masters, the newly formed customer team IronForce by Ring Police again received a cup in the Trophy category. Amateur drivers Jan-Erik Slooten and Lucas Luhr concluded Saturday’s race on third in the class. Overall, IronForce by Ring Police finished on 18th place. “Before the race, I looked for a line I could take in case of a collision. That worked well and we didn’t touch any other cars. Our pace was good, but we still lack the acumen to also attack,” explained Slooten.

The next race weekend of the ADAC GT Masters will be held from 8 to 10 June at Spielberg, Austria. The Red Bull Ring has been a regular fixture on the calendar of the race series since 2011. In 2016, Porsche works driver Kévin Estre won a round of the series for KÜS Team75 Bernhard. The races are broadcast live on SPORT1 as well as on the internet at www.sport1.de, www.adac.de/motorsport and www.youtube.com/adac.