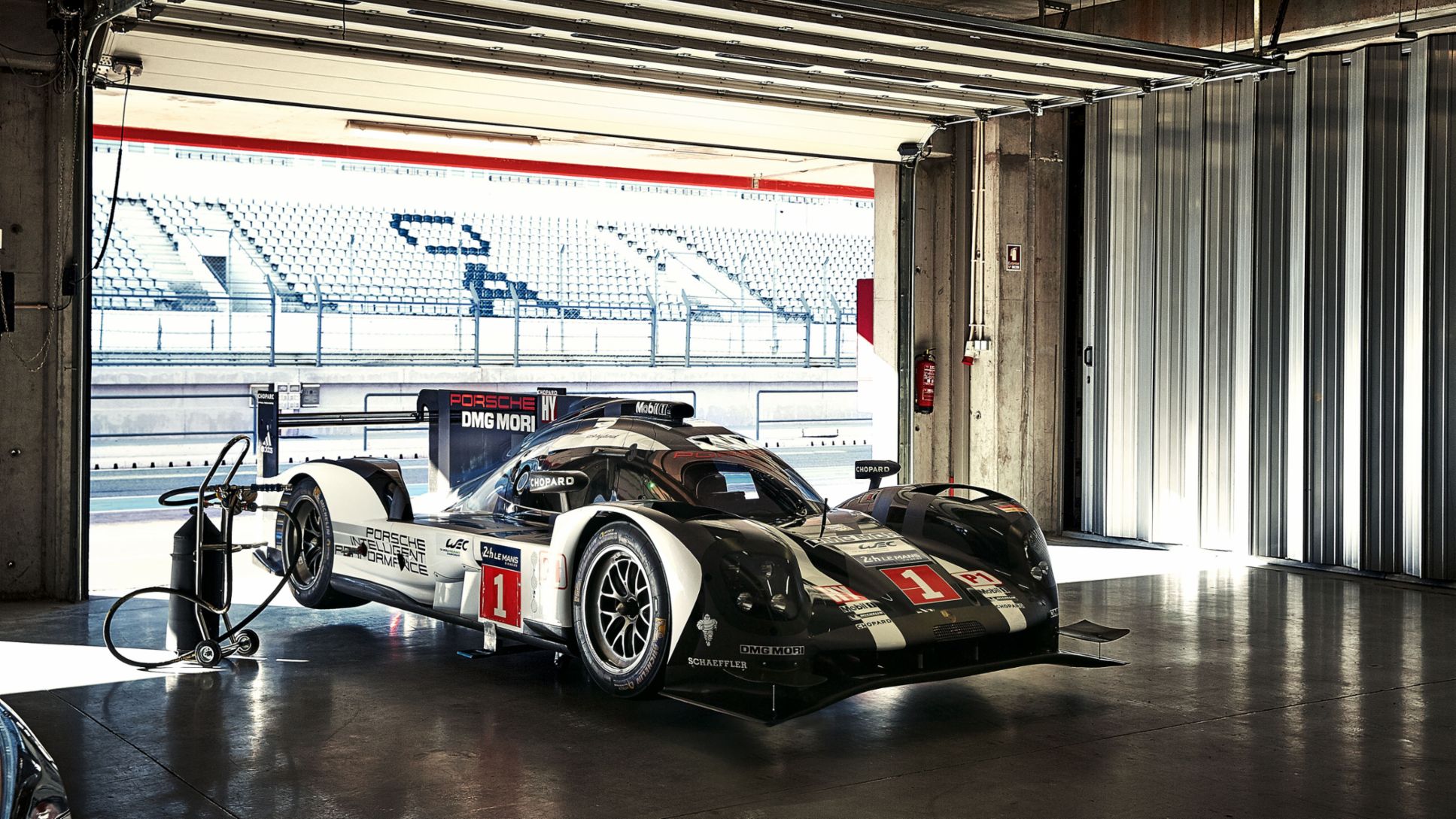 World debut for the new 919 Hybrid

Ready for title defence: Two days before the official Prologue for the FIA World Endurance Championship (WEC) at Paul Ricard, France, Porsche is presenting its race car for this season.

Strong development characterises the new 919 Hybrid’ technology. The powertrain became even more efficient, the aerodynamics were even more specific for the various race tracks and the weight of single components was even more reduced. “The over 900 hp strong Le Mans Prototype is ready for the title defence,” said Fritz Enzinger, Vice President LMP1.

Even the livery of the Porsche 919 Hybrid’s third generation represents an evolution: In its debut year, 2014, the 919 was white and sported the claim “Porsche Intelligent Performance”. The first letters of this slogan were also on the 2015 racing cars with their background colours of white, red and black. In 2016, all three colours melt together into a new design.

Also new are the car numbers: In 2015 a one-two result at the Le Mans 24-hour race was achieved. Porsche won the manufacturers’ World Championship title. Timo Bernhard (DE), Brendon Hartley (NZ) and Mark Webber (AU) became the Drivers’ World Champions and will now race with the number 1 on their car. The sister car of Romain Dumas (FR), Neel Jani (CH) and Marc Lieb (DE) will carry the number 2.

For the first time Porsche fully exploits the WEC regulations by deploying three different aerodynamic packages to make the car best suit to the respective race tracks. Three aerodynamic specifications are the maximum allowed. The weight of the four-cylinder turbo engine, as well as its fuel consumption, could be further reduced. The two energy recovery systems of the hybrid drive have been improved in terms of efficiency.

For 2016, also the components of the electric drive have become even more powerful and efficient. That applies for the optimised electric motor at the front axle, the power electronics and the new generation of lithium-ion battery cells in the in-house developed battery. A new front axle allows for more set-up options, while the intense tyre development with partner Michelin made a refined overall set-up for the new 919 Hybrid possible.

For the 2016 Porsche 919, the basis of the chassis structure remains unchanged, as does the hybrid drive concept with its two-litre V4 turbocharged petrol engine and the two different energy recovery systems (braking energy from the front axle and exhaust energy). Right from the start, for the 2014 season, Porsche had this courageous and spot on concept in place. But the first car showed exceptional potential, especially in terms of weight, and is why a new car for 2015 was built. For 2016, there is less need to change and Porsche is benefitting now from stability for the concept.

The WEC regulations back the hybrid

The regulations for the LMP1 category require manufacturers to use hybrid drive systems and establish a direct link between performance and energy efficiency. This means that a large amount of energy from recovery systems may be used, but entails a proportional reduction in the permitted amount of fuel per lap. The quantity of fuel consumed in each lap is counted.

The WEC allows engineers a great degree of freedom in terms of the hybrid drive concepts. The teams can choose between diesel and petrol engines, naturally aspirated or turbocharged engines, various displacements, and one or two energy recovery systems. This formula puts the focus on innovations with high relevance for future production sports cars – and this was the main reason why Porsche decided to return to the world of top level motor racing.

The combustion efficiency and mixture preparation of the 2-litre V4 turbocharged petrol engine, driving the rear axle, was further increased in close work with the engineers from production development in Weissach. Also the 90-degree V-engine shed some more weight. Last season, the output of the combustion engine was well above 500 hp. But the 2016 regulations stipulate a lower amount of energy from fuel per lap and reduce the maximum fuel flow for prototypes.

In this way, the regulations prevent the LMP1 cars from becoming increasingly faster, yet at the same time fuel the engineers’ efforts to generate more power from increasingly less fuel. For the 919, this means around eight per cent less fuel and power. In other words: ten megajoules less energy per Le Mans lap from the fuel. That costs about four seconds for every 13.629-kilometre Le Mans lap. Through the new restrictions, the combustion engine has dropped to below 500 hp.

The kinetic energy produced at the front axle when braking is converted into electrical energy. The second recuperation system is installed in the exhaust tract, where the exhaust-gas stream drives a second turbine in parallel with the turbocharger. It uses excess energy from the exhaust pressure that would otherwise escape into the environment. The VTG technology used here – that is, the variable adaptation of the turbine geometry to the level of exhaust pressure – drives the turbines, even at low engine revs and low pressure.

The additional turbine is connected to an electric generator. The electricity produced – along with that generated by the KERS at the front axle – is temporarily stored in lithium-ion battery cells. When the driver calls up the full-boost, additional power output of more than 400 hp will thrust him back into his seat. This power is applied to the front axle by the electric motor, and it temporarily transforms the 919 into an all-wheel drive car with system power of around 900 hp. For each circuit, the team works on developing the strategies for when and to what extent energy is recuperated and called up.

The WEC regulations allow engineers plenty of scope with regard to the energy storage medium: Initially, the competition used flywheels and ultracaps (electrochemical supercapacitors). For 2016, they are all following Porsche’s lead of lithium-ion batteries. Another important fundamental decision with the 919 Hybrid was the high voltage of 800-Volt – a technology that series developers are adopting in the Mission E concept car.

Energy classes in the WEC

The regulations distinguish between four levels ranging from two to eight megajoules (MJ) of deployable energy. The calculation is based on the 13.629-kilometre lap in Le Mans, and is adjusted for the other eight racing circuits. The high level of efficiency of the combustion engine, the recovery systems and the energy storage enabled Porsche in 2015 to become the first and only manufacturer to choose the 8 MJ class.

In this highest recuperation category, an FIA flowmeter device will limit the permitted amount of fuel per lap to 4.31 litres. Engineers also have to take into account the fact that the more powerful the energy recovery and storage systems are, the bigger and heavier they tend to be.

Like in Formula 1, the Porsche 919 Hybrid monocoque is a carbon-fibre sandwich construction that is manufactured as a single unit. The monocoque, combustion engine and transmission as one unit ensure optimal rigidity. While the V4 engine fulfils a load-bearing function within the chassis, the hydraulically operated sequential 7-speed racing gearbox made of aluminium is mounted in a carbon structure. For 2016, the gearbox and gearbox mounting remain structurally identical. The focus for development on the gearbox was on weight reduction.

For even better driving dynamics, balance, traction, grip and set-up options, the Porsche 919 Hybrid received a new front axle and an optimised rear axle for 2016. After intense testing in February, an increase in performance on the part of the Michelin tyres is expected.

Efficient aerodynamics for every race track

Porsche took a three-pronged approach to aerodynamic improvements for the first time in 2016. Until now, Porsche settled on a compromise for the season-opening round of the World Championship and campaigned the 919 with lower downforce than would have been ideal for the Silverstone circuit. This compromise was for the sake of the season highlight at Le Mans.

The French racetrack with its long straights requires very low drag, which means downforce must be limited to what is absolutely necessary. In 2016 the 919 will start the season running a high downforce package. It will be tackling Le Mans with an extremely low downforce configuration and will have another high downforce package for the following six WEC races. The regulations prohibit more than three aerodynamic configurations per year.

The changes to the aerodynamics were driven by further improvements in efficiency and more stable handling in different driving situations. Influences such as side winds, changes in balance under cornering as well as yaw and roll angles were further reduced.