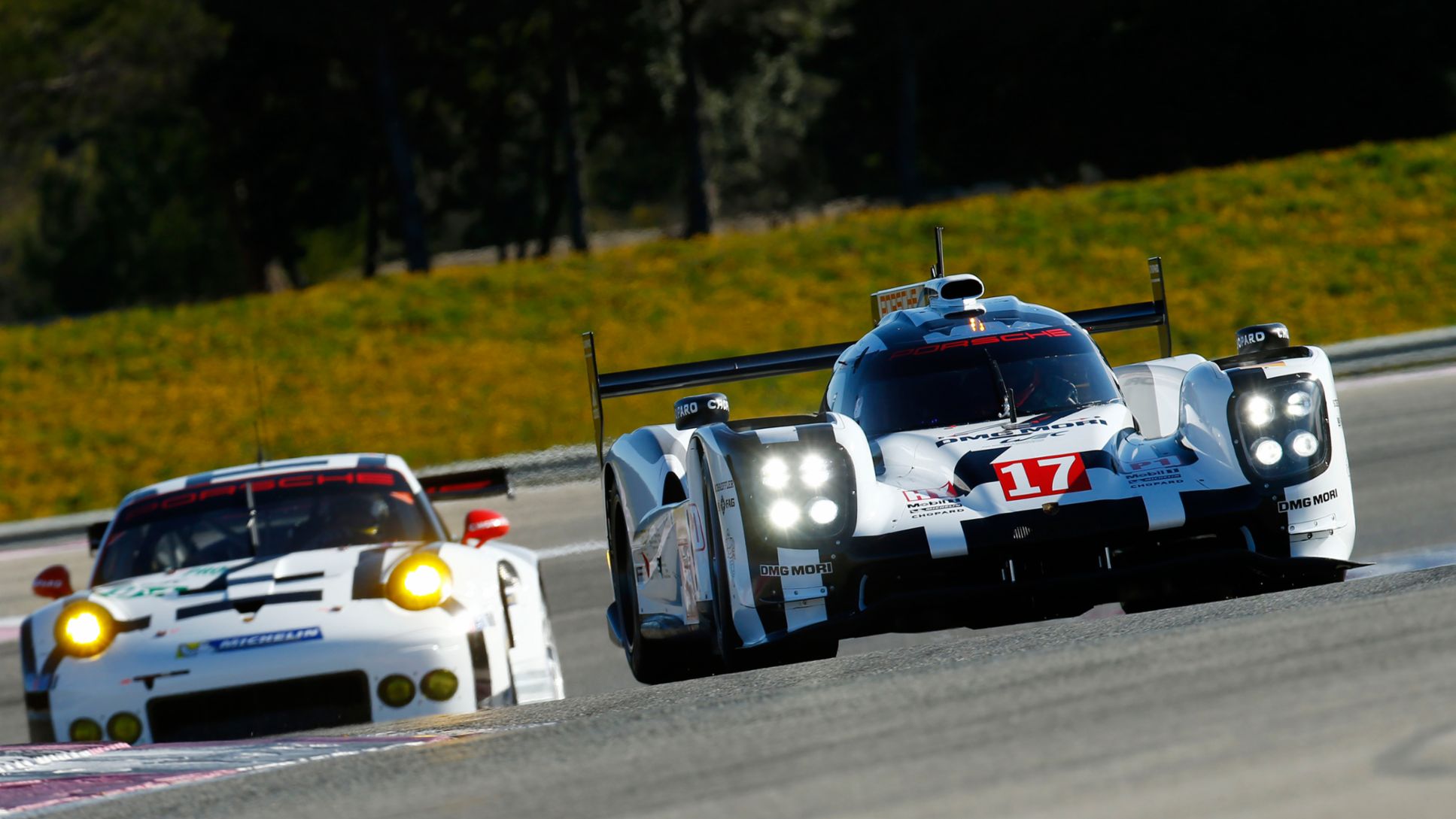 The World Endurance Championship WEC heads onto the final stretch with the penultimate of eight races on 1 November in Shanghai (CN). The first practice sessions went smoothly for both 919 Hybrid.

Timo Bernhard (DE), Brendon Hartley (NZ) and Mark Webber (AU), sharing car number 17, came third in FP1 and set the fastest lap time of the day in FP2 (Webber, 1:45.111 minutes). In comparison: in 2014, Neel Jani had set the fastest lap time of the entire weekend in qualifying by lapping in 1:47.036 minutes. The number 17 trio is currently leading the drivers’ world championship by a single point ahead of the Audi car number 7 crew. The Porsche sister car of Romain Dumas (FR), Neel Jani (CH) and Marc Lieb (DE) was fourth fastest in the first practice session and came second in the afternoon. Track conditions were consistently dry with ambient temperatures of around 18 degrees Celsius.

Should all go well in the race, Porsche as the current leader could  take home the overall World Manufacturers’ Championship title in Shanghai, thanks to an advantage of a 53 point margin ahead of Audi. This would be the first world championship title for the sports car manufacturer since 1986 and the 13th in the brand’s endurance racing history.

In endurance racing more than in any other category of top motorsport, the emphasis is on the marque. There are three reasons for this: Automobile manufacturers measures themselves in terms of technical innovation, teams win rather than individuals, and it’s about teamwork in all its diversity.

WEC stands for World Endurance Championship: The series is an offshoot of the legendary World Sports Car Championship (1953-1992), in which Porsche netted twelve World Championship titles between 1964 and 1986. Then and today, one world championship race in particular stands out from all the rest: The 24 Hours of Le Mans, touted as the toughest endurance race in the world. There, on June 14, 2015, Porsche scored a one-two victory. More triumphs followed: Double victories at the six-hour races on the Nürburgring and at Fuji, with another win thrown in between in Austin, Texas. Now comes the home stretch with round seven in Shanghai and eight in Bahrain. With 264 points, Porsche leads the overall classification ahead of Audi (211) and Toyota (119). The maximum haul per six-hour race is 44 points – for a one-two victory plus pole position. For Porsche in just its second year of competing, having the manufacturers’ title suddenly within grasp is coming much earlier than expected.

For Porsche, it has always been the complex technical regulations that held an appeal. For instance, 1982. Back then, the so-called Group C was incorporated in the World Championship. It was based on an efficiency formula, in which the prototype racing cars contesting the 1,000-kilometre race on the Nürburgring were allowed “only” 600 litres of fuel – today the 919 Hybrid uses just half that. At that time, Porsche developed the 956, the most successful race car of the next years – and significantly advanced turbo technology. The pressure of competition brought about the PDK – the Porsche double clutch transmission, enabling smooth and efficient gear shifting, and, since 2008, boosting performance using cutting edge control electronics in the 911 Carrera1) and also efficiency. Pioneering achievements in terms of lightweight design go back further still – the aluminium body of the 550 Spyder for example, with which Porsche won the fuel consumption classification at Le Mans in 1955. Or the magnesium spaceframe of the 1971 Le Mans-winning 917. “Downsizing”, today an efficiency edict of the industry, has for decades been put into practice in long distance racing with compact turbo engines. The most efficient engine that Porsche has ever built is the two-litre, four-cylinder, petrol-run turbo unit mounted in the 919 Hybrid.

Hybridisation is another welcome obligation for manufacturers in their bid for overall victory in the WEC. With two different energy recovery systems, brake energy from the front axle and exhaust energy, Porsche brings the most innovative package to the grid. Despite the thrill of winning races, it is more important that Porsche has gained insights into new recuperation, storage and engine management systems. In the R&D Centre at Weissach, motor racing and production development work hand in hand. That applies equally to rolling research labs such as the 919 Hybrid prototypes as it does to near-production racing vehicles such as the 911 RSR. This two-pronged approach is a tradition at Porsche. In 1976, for example, the 936 prototype won the World Sports Car Championship, and the production-based 935 clinched the World Championship for Makes.

It is about teamwork

The importance of endurance racing to the brand is also inherent in the system in other ways: It is about teamwork. In a series like Formula 1, individual drivers reap fame and fortune, but it takes more than one in long distance racing. The pilots must work together in harmony. They must ensure that the two sharing the cockpit feel good and can achieve their optimum speed. Three race drivers work towards one and the same goal. This aspect gives rise to a competitive spirit, more like football than other motorsport disciplines.

The third aspect is the constant monitoring of vehicles in other classes. The six works drivers crewing the Porsche 919 Hybrid prototypes, currently the fastest LMP1 cars (Le Mans Prototype Class 1) – Timo Bernhard (DE), Romain Dumas (FR), Brendon Hartley (NZ), Neel Jani (CH), Marc Lieb (DE) and Mark Webber (AU) – are well aware that slower vehicles in the GT classes are fighting for glory, as well. The lapping of fellow competitors happens constantly. GT drivers glance often in the rear vision mirror. The Porsche works drivers in the near-standard 911 RSR – Michael Christensen (DK), Richard Lietz (AT), Frédéric Makowiecki (FR) and Patrick Pilet (FR) – allow space for their brand colleagues as they do for Audi and Toyota or class 2 prototypes. The unspoken communication between the 31 competing cars must work instantly and at all times, otherwise it becomes dangerous.

In the GT class, Porsche ranks second with 215 points. Ferrari leads with 228 points, Aston Martin is on 147 points. No matter what class, big-name carmakers are competing. And that’s what makes the manufacturers’ title so coveted.