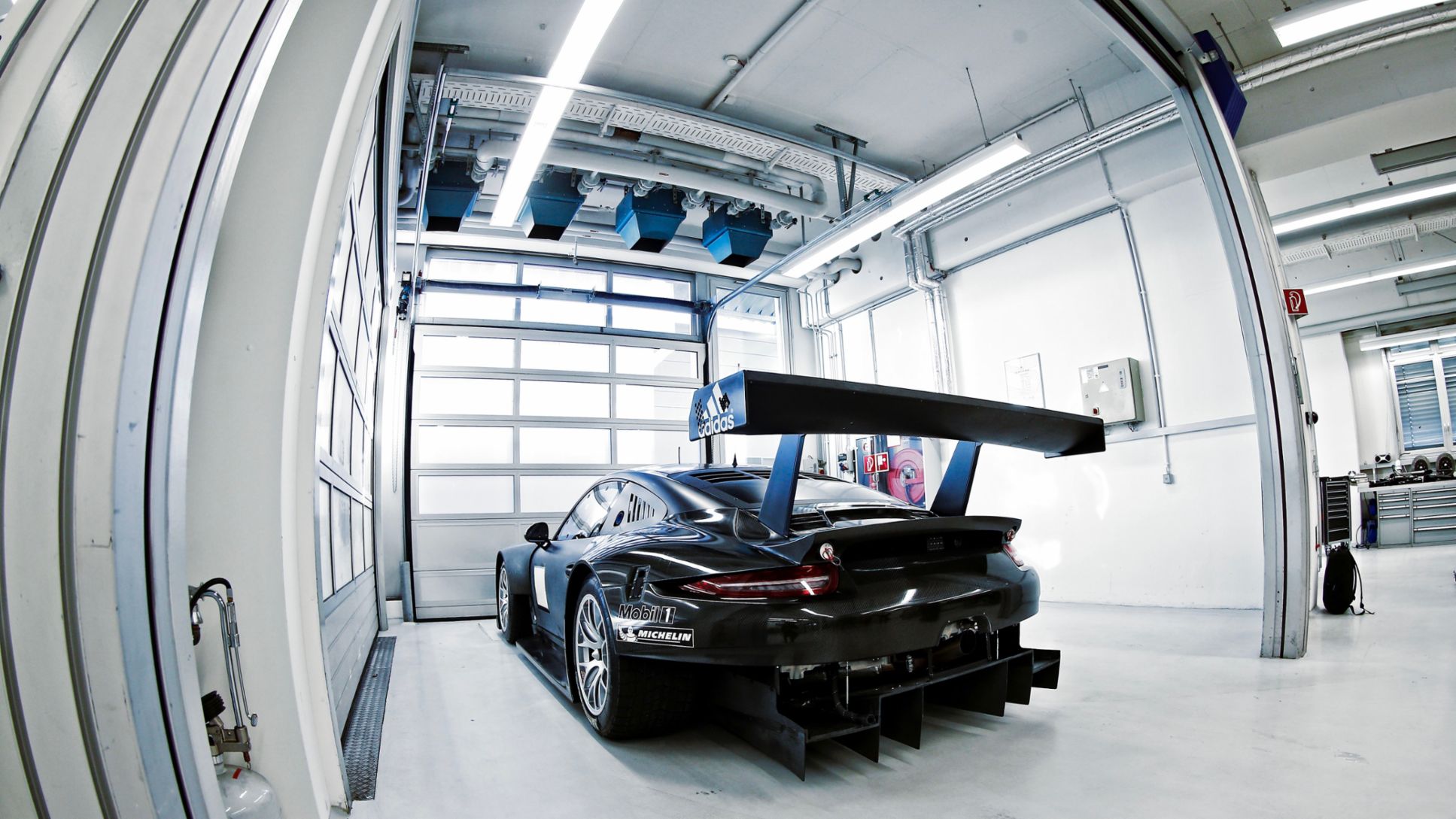 The development of the new Porsche 911 RSR

At the ten-hour Petit Le Mans race contested on the tradition-steeped Road Atlanta racetrack last Saturday, the new 911 RSR scored the first two champi- onships. There, Patrick Pilet (France) and Dirk Werner (Germany) won the prestig- ious North American Endurance Cup with the 510 hp GT racer from Weissach. The long-distance classics that count towards this performance and reliability competition in international GT racing are Petit Le Mans, Daytona, Sebring and Watkins Glen. The Porsche GT Team also won the team classification at the series’ four premier races, where teams and drivers had to underline their consistency and reliability over a total of 52 hours. The first highlight of the new 911 RSR’s maiden season came on 22 July, scoring its first victory at the Lime Rock round of the IMSA SportsCar Cham- pionship.

“Winning the North American Endurance Cup has shown that we were always at the front at the right time at the major endurance races and, above all, we’ve also under- lined the reliability of our new 911 RSR over the season. For a maiden season with a completely new car, this was a good performance,” said Dr Frank-Steffen Walliser, Vice President Motorsport and GT Cars. For Marco Ujhasi, Director GT Factory Mo- torsports, the first race victory for the new 911 RSR was “a particularly emotional moment. We’ve all worked towards this day with total commitment and absolute pas- sion.”

The 911 RSR, which the Porsche GT Team also campaigned in this year’s Sports Car World Endurance Championship WEC, is a completely new development. The key new feature is the positioning of the engine in front of the rear axle. Thanks to this, the weight distribution improved and at the same time more space was freed up to fit a larger diffuser at the rear which generates significantly more downforce.

The development of the new 911 RSR began in early 2015. Initially, a small team with representatives from individual divisions was engaged in analysing the “lessons- learnt” potential of the predecessor model as well as studying the sporting and tech- nical regulations. From their findings, a new vehicle concept was then tailored to the requirements of modern long-distance racing. And race drivers were included in the development process earlier than ever before. “The drivers have to feel comfortable in the car,” said Marco Ujhasi. “Only a driver who still feels fresh at the end of a gruel- ling stint will be able to give the top performance that is needed to be successful in such a tough competitive environment.”

All of the GT works pilots were given the chance to drive the first kilometres in the new 911 RSR at the rollout in March 2016 on Porsche’s test track in the Research and Development Centre at Weissach. Extensive tests were then undertaken on racetracks that were selected for a specific development task: suspension setup, tyre and brake development as well as aerodynamic validation. The highlight of the test phase was a 50-hour long run in Sebring. “As far as I know, no other manufacturer has dared to do this,” says Marco Ujhasi. The test on this extremely bumpy racetrack in Florida, known for the immense challenges it throws at man and machine, ran without any major issues. “Precisely because of the enormous stresses, it was the right direction. This was confirmed at the first two races of the season; the long- distance classics of Daytona and Sebring, where our new car impressed immediately with a strong performance.”

The new 911 RSR is powered by a cutting-edge, naturally aspirated, six-cylinder boxer engine. The displacement is 4,000 cc, with the output at around 375 kW (510 hp), depending on the restrictor. The motor features direct fuel injection as well as a rigid valve drive and is characterised by outstanding efficiency. The engine is a sys- tematic evolution within the line of Porsche’s normally aspirated motors, which not only meets the demands of a racing engine for the 911 RSR, but also the require- ments of a 911 GT3 for the road. The developers opted for a normally-aspirated powerplant, not only because it saves up to 40 kg in weight. Marco Ujhasi: “A natural- ly aspirated engine is a highly emotional powerplant for customers of our road-going vehicles, yet it also has the performance potential to meet the high demands of mo- torsport.”

Thanks to the outstanding baseline engine development for the 911 GT3 R, the RSR motor ran for the first time on the test bench after about seven months. Full-scale endurance runs began after almost a year. The test programme for the engine of the 911 RSR included two 70-hour long runs under different weather conditions. All up, the engine of the 911 RSR withstood over 300 hours of endurance runs. Despite the sophisticated engine test benches, testing on a racetrack is still critical.

“On the test beds, we simulate maximum stress situations, such as a particularly fast qualifying lap on circuits with maximum full-throttle passages such as Daytona and Le Mans,” says Marco Ujhasi. “Special racing situations, like caution phases or a sudden exit from the pit lane, cannot be simulated on a test bench. These insights as well as impacts on the entire vehicle can only be gained on the racetrack.”

Early on in the development of the aerodynamics for the new 911 RSR, computer simulations CFD (Computational Fluid Dynamics) were carried out. These trials of- fered the chance to evaluate certain concepts and components without having to ac- tually build a model. Afterwards, the concepts under consideration were tested in the model wind tunnel, in real airflow. After the model wind-tunnel trials, 80 per cent of the car was completed. The next step for the last 20 per cent was then to go testing in the large Weissach wind tunnel with a running belt. This simulates a racetrack al- most identically; it can replicate entire corners to see how the car will behave on ac- tual racetracks. These discoveries are then fed back into the computer simulation, with the help of which one can, for example, very accurately predict lap times the car would normally clock on the racetrack.

The new 911 RSR’s serviceability was significantly improved. Changes to the sus- pension setup can be performed much more quickly and easily, and, if necessary, entire elements of the carbon-fibre body can be exchanged completely in a very short time thanks to cleverly-devised quick-release fasteners. A door, for example, can be replaced within 15 seconds, and a front bumper with underbody can be swapped out in less than one minute. “Those who encounter these problems with a private road car,” said Marco Ujhasi, “would have to catch a taxi or a train for the day.”

The new 911 RSR is the first Porsche GT race car to be fitted with state-of-the-art assistance systems. Thanks to a radar-supported collision warning system, the so- called “Collision Avoidance System”, drivers, who are constantly being overtaken by more powerful and faster prototypes, enjoy a better view to the rear. On a monitor in the cockpit, arrows indicate if vehicles are following directly behind. Depending on the colour of the arrows, the driver knows whether the trailing car is coming closer or falling back. Not only does this system work in fair weather, but also in rain, fog and at night. A new safety cage and a new, rigidly-mounted racing seat further enhance driver safety.

Works drivers and teams involved in the development

The Porsche GT works drivers were included in the 911 RSR project at a very early stage. At first, the main priorities were to optimise the correct seating position, the visibility to the front as well as the ergonomics. Drivers must not be affected by a poor seating position, especially at long distance races. Another key factor is the layout of the many lights and switches on the steering wheel and in the cockpit. Every button and switch must be easily accessible and easy to use. As a starting point, a basis was found. The fine tuning came once the car was put on its wheels. From the first test, the drivers were involved in identifying weaknesses and further developing the car in conjunction with the engineers.

The drivers are extremely pleased with the result of this very open cooperation. Richard Lietz, the 2015 winner of the FIA Endurance World Cup as the best GT pilot, sums it up this way: “The new 911 RSR is the best GT car that Porsche has ever built.” After the 2017 debut season, in which the 911 RSR was exclusively fielded by the works team in the FIA WEC and the IMSA Championship, Porsche Motorsport offers the vehicle to selected customer squads in 2018.

Other facts and figures

The new 911 RSR consists of 5,342 individual parts in total. Of this, the vehicle is made up of 3,646 parts, with the engine containing 1,282 parts and the gearbox 414 parts. The largest single part is the body, with the smallest component a circlip in the door handle.

Since the roll-out in March 2016 to its first race in January 2017 at the Daytona 24- hour race, over 35,000 test kilometres have been covered on various racetracks with the new 911 RSR – that’s more than in the development of any other Porsche GT race car.