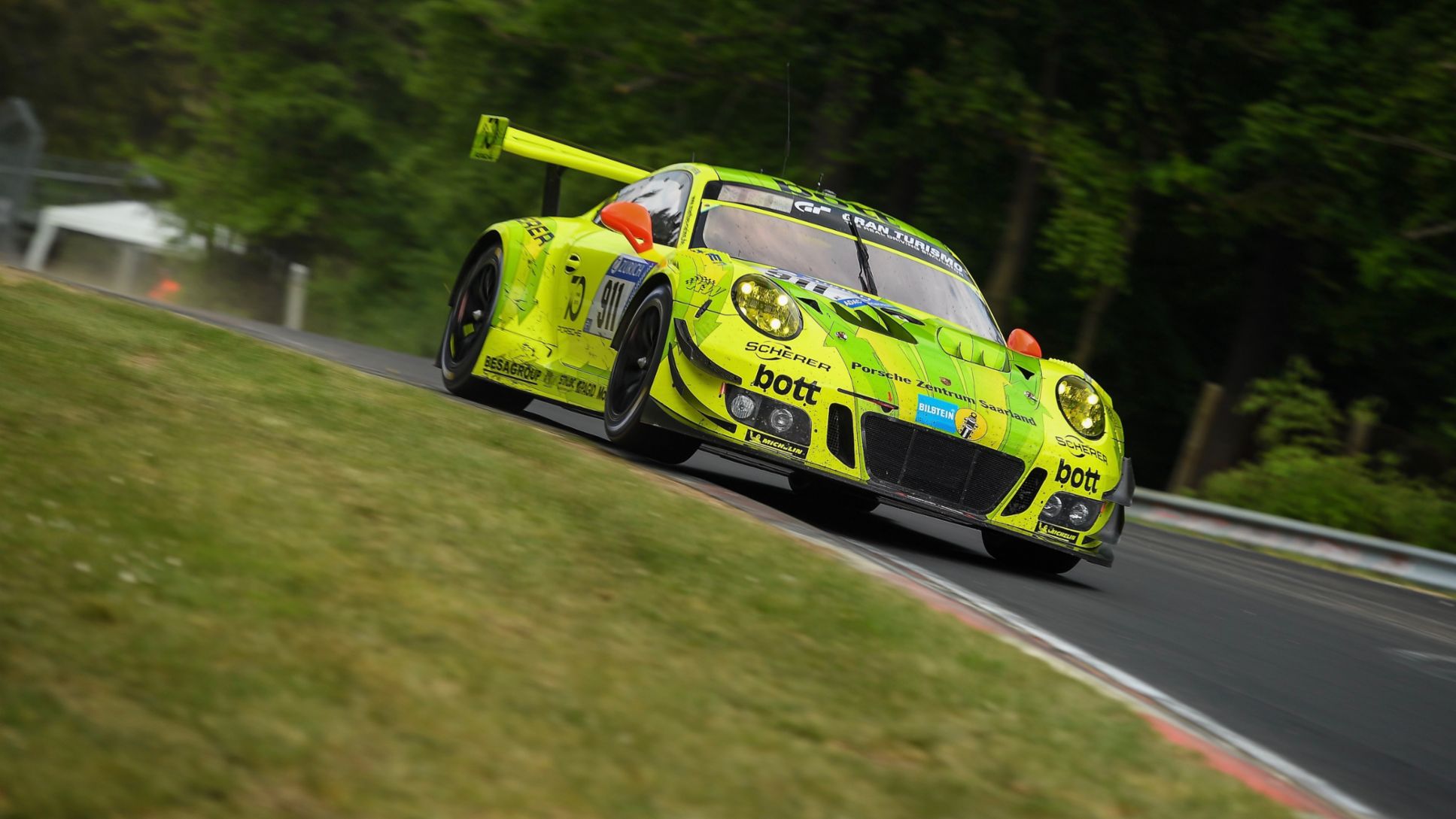 Porsche customer teams have secured a triple pole in the Top 30 Qualifying for the 24-hour race at the Nürburgring. Laurens Vanthoor planted the Porsche 911 GT3 R on pole position with a stunning time of 8:09.105 minutes.

Driving for the Manthey-Racing squad, the Belgian scored the pole-setting time in his second lap at the wheel of the #911 Porsche 911 GT3.

Sven Müller (Falken Motorsports) drove an inspired lap with his #44 nine-eleven to occupy P2. Securing the third grid spot, Frikadelli Racing’s Norbert Siedler (#31) made the triple Top 30 Qualifying result perfect for Porsche. Frédéric Makowiecki from Manthey-Racing takes up the 24-hour race from sixth place in his #912 Porsche 911 GT3 R. Thus, four of the top six race cars are from Porsche.

With more than 200,000 spectators expected, the Nürburgring 24-hour race is one of the largest motorsport events in the world. At the Eifel classic, more than 500 drivers in 148 cars will take off into the race on Saturday at 15.30 hours. With 43 vehicles lining up, Porsche is the most strongly represented marque at the Nürburgring 24 Hours.

Dr Frank-Steffen Walliser (Vice President Motorsport and GT Cars): “It’s phenomenal to lock out the first three grid positions here at the Nürburgring. It was an extremely competitive qualifying with all cars clocking very close times. It promises to be a very exciting race on Saturday. I’m very proud of our teams, we’ve reached an important milestone, but we now have to reproduce this performance in the race. We’re thrilled, but the real work starts now.”

Laurens Vanthoor (Porsche 911 GT3 R #911), Manthey-Racing: “I made a small mistake in the first lap. After that everything came together well and I found my ideal racing line. It’s a crazy feeling to drive alone on the Nürburgring and to go flat-out.”

Sven Müller (Porsche 911 GT3 R #44), Falken Motorsports: “I pushed harder in the first lap than I ever have in my life, so I simply couldn’t do better in my second lap. The car felt extremely good, it was huge fun. I’m totally happy with P2.”

Norbert Siedler (Porsche 911 GT3 R #31), Frikadelli Racing Team: “My first lap was great and I never thought we could be that fast. I then returned to the pits because I knew it simply couldn’t be faster.

Frédéric Makowiecki (Porsche 911 GT3 R #912), Manthey-Racing: “On the whole the qualifying was good, and I could push really hard on the second lap. I’m very optimistic for the race. We have the pace to bring home a major victory from the Nürburgring.”

Michael Christensen (Porsche 911 GT3 R #17), KÜS Team75 Bernhard: “I made a couple of minor mistakes but all in all I’m satisfied. Over such a long lap you have to do everything perfectly. The car ran well, but I noticed that I couldn’t improve in the second lap because of deteriorating tyres.”

Dennis Olsen (Porsche 911 GT3 R #12), Manthey-Racing: “It was a great honour for me to take part in the Top 30 Qualifying Nürburgring for Porsche. I tried everything but I wasn’t quite as fast as I’d hoped to be. I’ve learned a lot today and I really want to do well in the race on Saturday.

Like last year here, the Stuttgart marque is the most strongly represented in the field of around 150 cars in the company’s “70 Years of Porsche Sports Cars” anniversary year. Porsche Motorsport supports customer teams with 13 Porsche works drivers and four Porsche Young Professionals. In the strongest SP9 class, eight Porsche 911 GT3 R will chase overall victory.

“We’re delighted with our customers’ extraordinary trust. This year, there’ll be more Porsche race cars contesting the Nürburgring 24-hour race than at most other editions of the race,” says Sebastian Golz, Project Manager 911 GT3 R. “Preparations have been completed in close cooperation with the teams and everything has gone to plan so far. The VLN 1 win and double pole at VLN 2 have underlined that the 911 GT3 R is well ironed out. We’re very interested to see how we’ll perform in close collaboration with our customers against strong opposition from other manufacturers.”

For the 2018 season, the Porsche 911 GT3 R received an update: The parts kit includes a new front lid for the optimisation of thermal management plus side flicks to improve the aerobalance.

On Friday, 11 May, Porsche fans can catch a glimpse of the future in the Ring Boulevard: The spectacular next-in-line to the successful 911 GT3 R, which will compete from 2019, will be unveiled at a public press conference.

The Porsche customer teams in the SP9 class

#24hNBR – Porsche will be represented by a large fleet of vehicles at the 24-hour race on the Nürburgring: 43 Porsche 911 and Porsche Cayman race cars will tackle the combination of the Grand Prix circuit and the Nürburgring-Nordschleife this weekend #MomentsofRacing pic.twitter.com/qMyUrqc7RT