At round eight of the championship in Monza, Italy, the Porsche junior from Germany Sven Müller (Team Project 1) scored his first win.

At round eight of the championship in Monza, Italy, the Porsche junior from Germany Sven Müller (Team Project 1) scored his first win. Porsche junior Klaus Bachler (A/Konrad Motorsport) crossed the finish line second on Sunday, with Porsche Cup Scholarship driver Earl Bamber (NZ/Fach Auto Tech) ranking third. Kuba Giermaziak, Bamber’s closest rival in the series (PL/VERVA Lechner Racing Team), finished fourth. “This is absolutely amazing! I whooped for joy when I saw the finish line. It was my greatest goal to win here,” said an ecstatic Müller. This Supercup season marks the first for the 22-year-old from the town of Bingen on the Rhine River. With the race result in Monza the fight for the title remains gripping until the season final in Austin, America (31 October to 2 November).

Müller got away well at the start

From pole position Müller got away well at the start and established himself at the front of the field. Behind him Giermaziak was overtaken by both Bamber and Bachler in the first lap. During lap two Bachler swept past Bamber and this order remained unchanged until the flag. Müller celebrated his lights-to-flag victory at the wheel of his 460 hp Porsche 911 GT3 Cup, based on the seventh generation of the 911, while Bachler notched up his best result so far this season. “To start from fifth and finish on second is a great result. At one point I strayed from the track slightly but luckily it came to nothing. Sven drove an immaculate race today,” outlined Bachler after the race. Bamber’s third place was enough for him to take home the title of the rookie classification. “I’ve earned one title and that’s great. Now I’m hoping to follow up with another one,” said Bamber with a cheeky grin.

All drivers on the podium have come from Porsche’s development programme. “That was an exciting weekend and it also confirms that we’re on the right track with our talent scouting and the subsequent backing,” stated Jonas Krauss, the manager of the Porsche Mobil 1 Supercup. After the eighth of ten rounds the championship is still wide open. Bamber ranks first with 123 points ahead of Giermaziak (118 points) and Bachler (84 points). With two championship rounds still to be contested, in theory three aspirants are still in the running for the title, with a total of 40 points up for grabs.

The best Italian on the Autodromo Nazionale di Monza was 18-year-old Matteo Cairoli (Antonelli Motorsport) in tenth. The youngster currently leads the Porsche Carrera Cup Italia and also posted the fastest race lap in Sunday’s race. “It’s simply amazing to compete as support to Formula 1 in my homeland. I got goosebumps when I drove past the packed grandstands,” said Cairoli. Porsche junior Connor de Phillippi (USA/FÖRCH Racing by Lukas Motorsport) finished thirteenth and was not particularly satisfied with his result. “I won’t take home the fondest memories of my first race in Monza. I should have done better,” analysed de Phillippi. Trailing the Californian over the line was Porsche junior Alex Riberas (E/Mc Gregor powered by Attempto Racing) in position 14. “After a fluffed qualifying the race became a game of pursuit for me. I came from 22nd on the grid and luckily managed to take home a few points,” explained Riberas.

The Italian round of the Porsche Mobil 1 Supercup in Monza also marks the final race of the championship on European soil. In just under two months (31 October to 2 November) pilots contesting the blue-ribbon brand trophy series will tackle the last and decisive race weekend on the Circuit of the Americas in Austin. For the first time since 2006, the Porsche Mobil 1 Supercup will return to race in America. The pilots are all particularly looking forward to the double-header in the state of Texas – but none more than the Americans Connor de Phillippi and Sean Johnston (Team Project 1). “There’s nothing better for me. It’s great that we conclude the season in my home country,” exclaimed the 21-year-old de Phillippi from the Förch Racing by Lukas Motorsport squad.

The Path to Victory Begins Upstairs

Sven Müller had to wait six years for his great triumph. 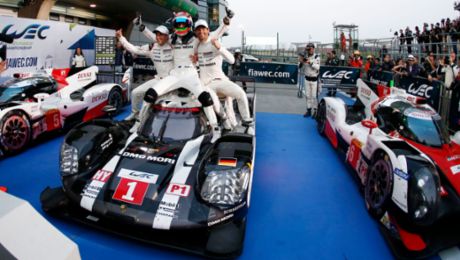 Porsche has secured the manufacturers’ title one race before the season’s finale. 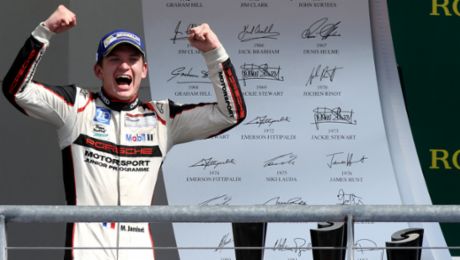