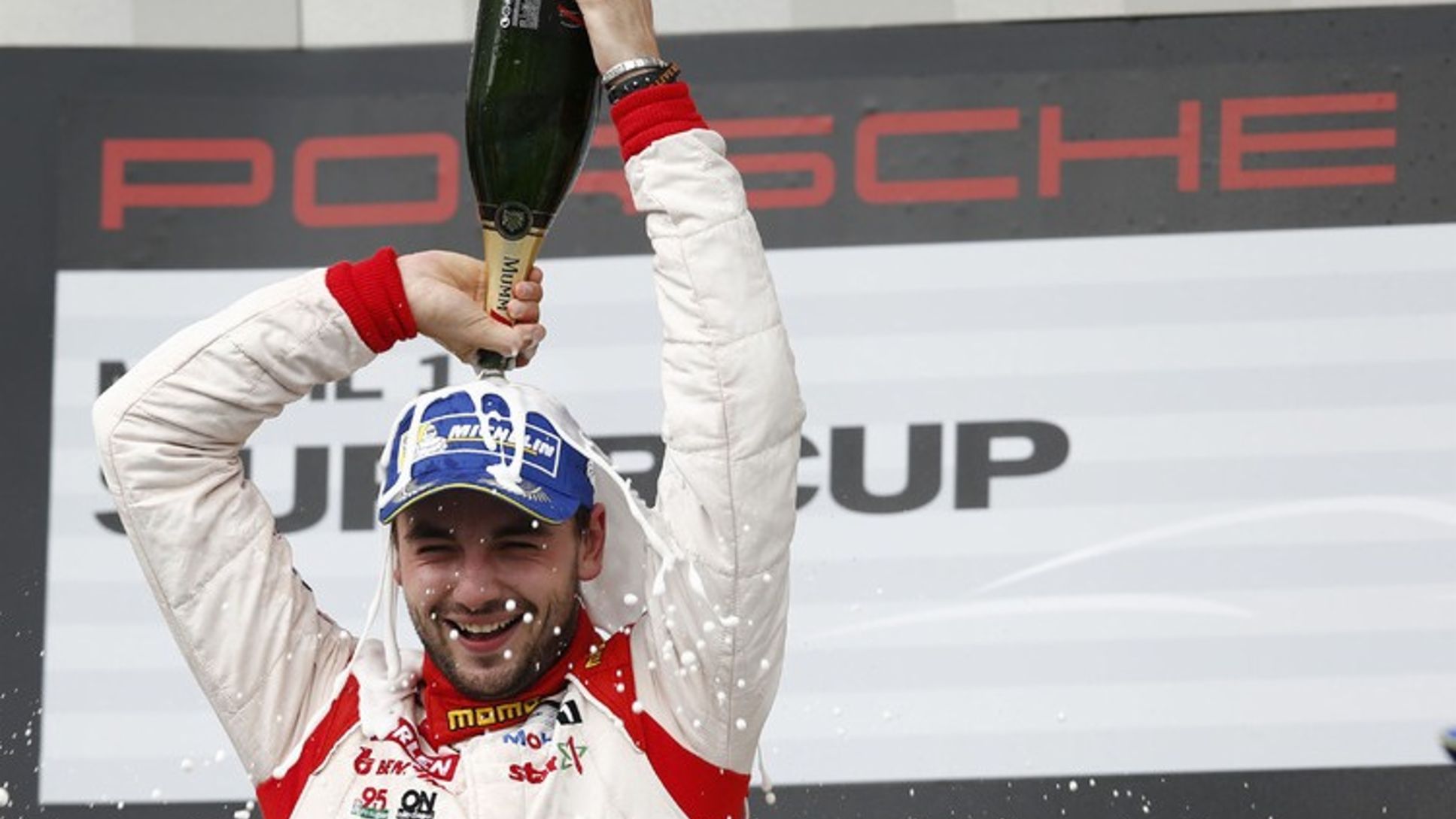 Kuba Giermaziak (PL/VERVA Lechner Racing Team) from Poland has won round six of the Porsche Mobil 1 Supercup. “My aim of course is to take home the title,” said the 24-year-old.

The Hungaroring seems to be lucky turf for Cuba Giermaziak. He has raced here five times and scored four podium results. After clinching pole position on Saturday, he went on to achieve a commanding lights-to-flag victory on Sunday.

At the wheel of his 460 hp Porsche 911 GT3 Cup, which is identical for all competitors, he made a clean start, whilst Earl Bamber (NZ/Fach Auto Tech) was overtaken by Nicki Thiim (DK/Walter Lechner Racing Team). And this is how the order stayed over the remainder of the 14-lap race. “This is a really great victory, particularly because Hungary always feels like a home race to me”, said the 24-year-old Pole. “Three wins in six races is a good yield so far this season. My aim of course is to take home the title.”

Riberas: Fending off an attack from Michael Ammermüller

Behind the podium contenders, Porsche junior Alex Riberas (Mc Gregor powered by Attempto Racing) faced tough opposition, fending off a particularly spirited attack from Germany’s Michael Ammermüller (Walter Lechner Racing Team). The 20-year-old Spaniard finally crossed the finish line in fourth. “My start was good and I managed to make up two positions in the first corner. After four laps I experienced problems with the tyres and had to fight hard to the end,” explained Riberas.

Taking the flag behind Ammermüller in sixth place was Porsche junior Klaus Bachler, who celebrated his 23rd birthday on race Sunday. “I took off into the race from eighth and finished sixth, and that has earned me more championship points,” said Bachler. After posting 18th in qualifying, Porsche junior Connor de Phillippi (USA/FÖRCH Racing by Lukas Motorsport) finished on thirteenth which netted him three points. “After my fastest lap in qualifying was revoked, the weekend was almost over for me. But now at least I’ve earned a couple of points,” said the 21-year-old Californian.

This weekend, pilots from 14 countries tackled the Porsche Mobil 1 Supercup, the flagship series of Porsche’s 19 one-make championships worldwide. Alif Hamdan (Fach Auto Tech), who also contests the Porsche Carrera Cup Asia, is the first driver ever from Malaysia to earn championship points for 15th place. Porsche junior Sven Müller (D/Team Profect 1) had to deal with his first retirement in a Porsche brand trophy series. “I became entangled in an accident at the start which damaged my car slightly. In lap three there was another collision and that was the end of my race,” said a disappointed Müller.

Thanks to his third victory this season, Giermaziak extends his lead in the overall classification. He leads the rankings with 96 points ahead Bamber (87 points), Ammermüller (64 points) and Ben Barker (GB/VERVA Lechner Racing Team, 57 points). With 20 points up for grabs for a win and four races left on the calendar, the title fight is still wide open.

From 22 to 24 August: Circuit de Spa-Francorchamps

In one month, the Porsche Mobil 1 Supercup pilots head to the next round. From 22 to 24 August, they tackle the race on the Circuit de Spa-Francorchamps, the longest race track on the calendar at 7.004 kilometres. The Ardennes rollercoaster – as the circuit is called due to its fast uphill and downhill passages – is a favourite amongst drivers and fans alike. Austrian Klaus Bachler (Konrad Motorsport) travels to round seven in Belgium with fond memories. Last year, the Porsche junior celebrated his maiden victory in the Porsche Mobil 1 Supercup. “Of course I want to repeat my result this year, but it won’t be easy. The competition in this series is extremely fierce,” says Bachler.

Result round 6 in Budapest/Hungary

Points’ standings after 6 of 10 races