Construction of the test site in 1961 marked the beginning of the success story of the Weissach development centre (EZW). Our series offers a glimpse behind those doors that normally remain closed. Part Five: the test site.

The test site may be regarded as the heart of the EZW because the history of the site began there some 50 years ago with the construction of the skid pad for testing vehicle dynamics. This is where every new prototype from the sports car maker learns how to drive.

“An essential element in the efficient development so typical of Porsche is the ability to conduct test runs with ease in the proximity of the offices and workshops,” says Eric Preising, Specialist for Chassis Test Rigs – Development Test Area.

The opportunities offered by the test site are many and varied: acceptance runs after the initial set-up or restructuring of a vehicle, endurance tests for checking operational stability, trial runs for tuning and optimising the chassis, engines, body and electrical systems as well as trial and acceptance runs with motorsport vehicles.

“We can complete fast laps with a Le Mans vehicle as well as drive through a fording basin with a Cayenne and then climb straight up a hill with a 100 per cent gradient,” explains Preising. “There’s hardly any other test site in the world that offers so many different development trials on such a compact area.”

Commissioning of the skid pad in 1962 was followed by the creation of the off-road circuit in Weissach in 1967. The fast Can-Am course was built around the skid pad in 1971, together with the mountain circuit and its tighter curves. “Over the course of time, the test track has been repeatedly adapted to new requirements, especially those relating to safety,” Preising points out. In the 1970s, safety fences were still used to line the circuit, but nowadays they have been replaced a by a six-pack, rigid-foam tyre system with high-strength strapping, which has been specially developed by the EWP department.

A glimpse behind those doors that normally remain closed. Part two: design studio. 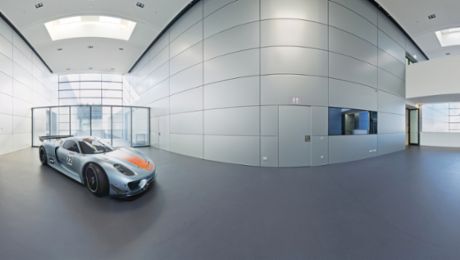 A glimpse behind those doors that normally remain closed. Part one: showcars.