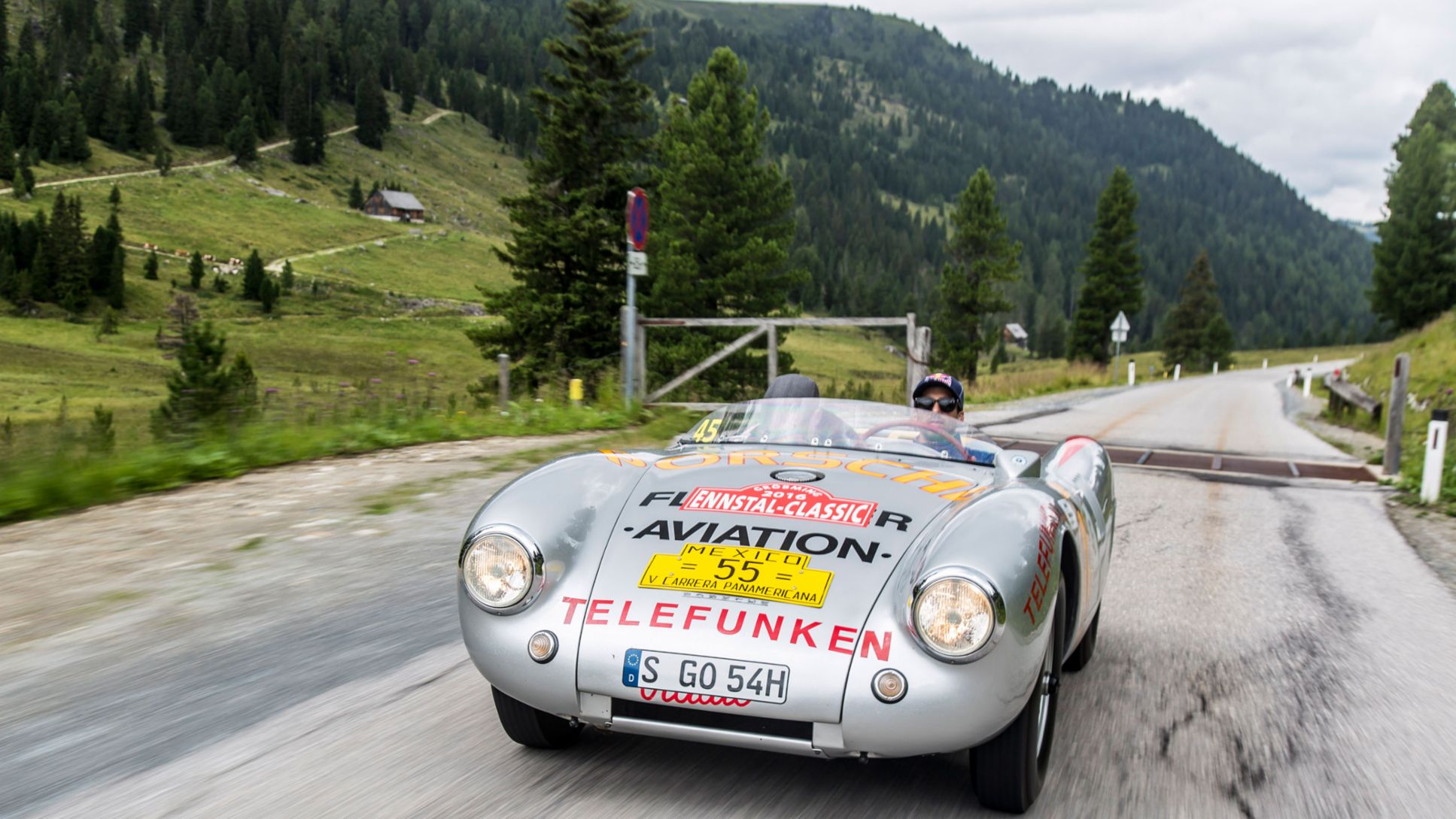 Three days, 30 trials, 1000 kilometres – the 2016 Ennstal-Classic once again saw around 200 classic cars and their drivers tackle a host of challenges.

For once, the event was not all about seconds and milliseconds. Instead, it focused on something that cannot be measured in physical units – enjoyment in its truest sense. This deep feeling of total satisfaction–both light and heavy at the same time–does not simply come from the type and condition of the vehicle, the state of the roads, the “kitsch” factor of the landscape and the amount of sun in the sky. It comes from some indefinable combination of factors.

For the 24th edition of the Ennstal Classic in Austria, the Porsche Museum temporarily moved its premises to the Austrian state of Styria. A total of eleven vehicles were registered from the rolling stock held by this museum of motorsport glory. They included some real treasures, like a 356 1500 Coupé, two 356 Speedsters, a 356 Carrera 2 Cabriolet, the 356 B GS Carrera GTL Abarth, a 914 / 6 and a 911 2.2 Targa S, as well as two motorsport icons: the 550 Spyder Carrera Panamericana and the 718 RS 60 Spyder.

For Dr. Porsche, Fritz Enzinger and Richard Lietz, the Ennstal Classic takes place practically on their home turf, in their native Alpine landscape. Dr. Porsche has been a regular driver for around 20 years, and Fritz Enzinger comes from close to the Red Bull Ring. Meanwhile, Richard Lietz can look out from his living room at a special stage event in a charming landscape.

Beyond the classic cars, the beautiful side roads through the Alps, the glorious weather and the excitement of the crowd, the conditions at the Ennstal Classic are enough to give anyone a thrill. In three days, nearly 200 classic cars from 1972 and earlier must drive 1000 kilometres through narrow gorges, barren mountain passes and sweeping Alpine pastures, all while completing 30 special stages, most of which are kept a secret.

Mark Webber and Neel Jani used the available speed range in their works Spyders to demonstrate the true lightness of motorsport history to the passing journalists from England, Austria and Germany. Driving a 356 Speedster at the Red Bull Ring, Dr. Eggert showed onlookers a different way of doing things. At this track, drivers had to complete four laps in a lap time of their choosing, but the third lap had to be three seconds faster than the target time.

Eggert and Silbermayr had a mechanical Tripmaster and two mechanical stop watches on board, but clearly their feet were working on an internal electronics program when they hit the accelerator pedal:

They missed their target by 0.2 seconds, but this was still enough to take first place.

What was more important for everyone involved was that the drivers and cars all reached the finishing line safely and in one piece, and that everyone was happy and relaxed. “Even the most valuable classic sportscars need a regular run-out”, says Achim Stejskal, “and we make sure it’s done under tough motorsport conditions”.

It’s a view that the classic car aficionados share, with a fifth of all the Ennstal participants driving a Porsche.