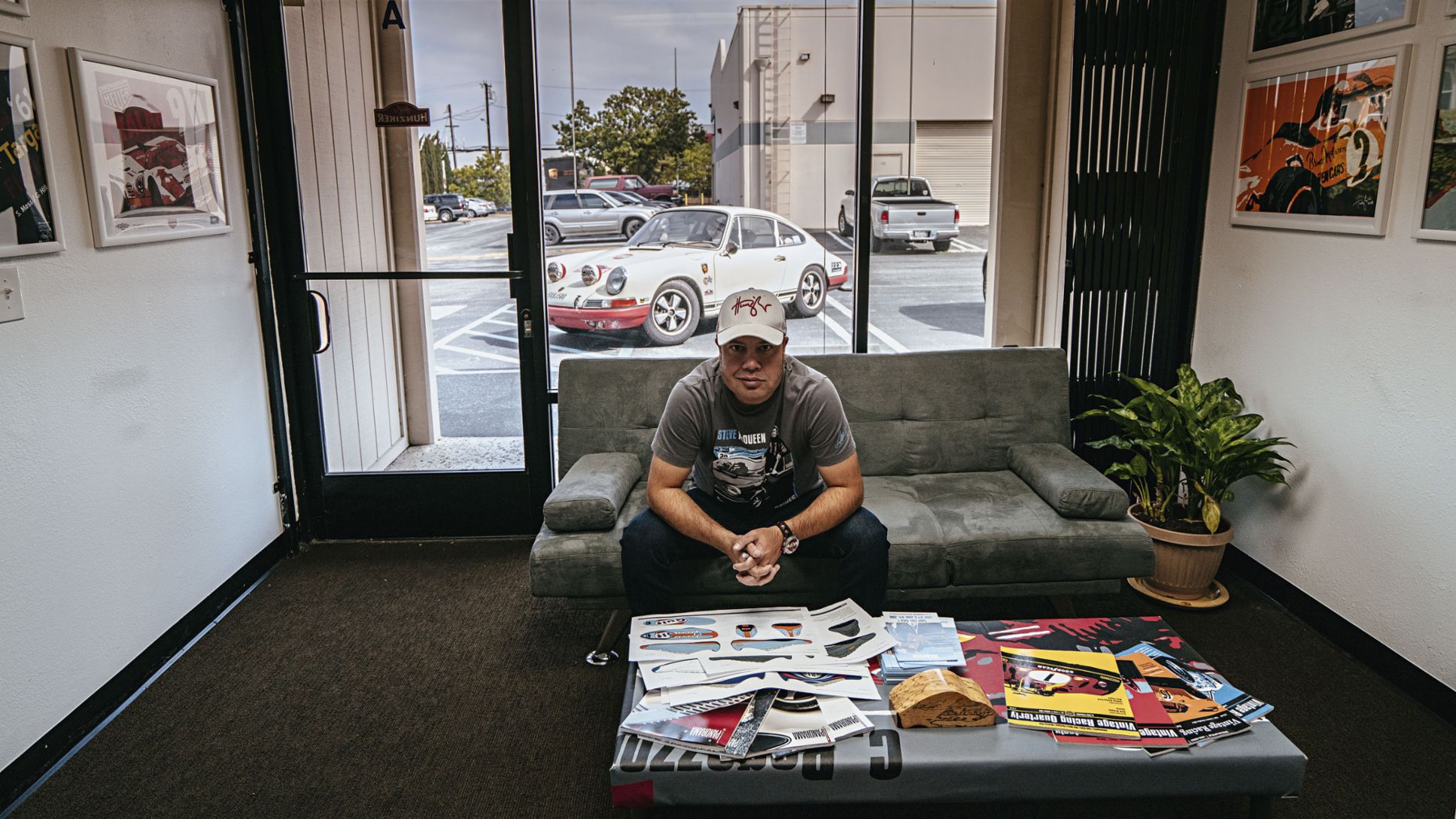 Whether it’s a redesign of the Porsche factory team’s racing jackets from the sixties and seventies, or a huge artwork inspired by the world of motorsport, we have a Swiss native to thank. Nicolas Hunziker is a fine artist, Porsche fan and a fixture on the Porsche scene in his adopted home of the USA. We visited him in his workshop – which, incidentally, is also his garage.

The Porsche LMP1 hangs on the wall, but is anything but static. Whatever direction you approach the lobby at One Porsche Drive, the Porsche Centre in Atlanta, Georgia, from – whether from the Carrera Café or Restaurant 356 – the artwork exudes dynamism. “It’s an amazing effect”, agrees Andre Oosthuizen, the North-American Vice President of Porsche Marketing. He continues: “We commissioned this piece and asked the artist to create an image that would dominate and captivate the entire space”.

A commissioned artist? The trail leads back to Nicolas Hunziker. The Swiss artist worked for several weeks on the 6 x 2.5-metre piece, which depicts the latest Porsche to win the 24 Hours of Le Mans race. For the piece, Hunziker employed the same screen printing technique used by his grandfather, Gerold Hunziker, back in the 1930s, when he was commissioned to create the official poster for the Olympic Games and racing posters for Bugatti. In the now iconic art deco style. The Hunziker DNA is creative – creative enough to seamlessly blur the boundaries between art and sport. There is even some royal racing blood in the family genes: Nicolas Hunziker’s great uncle was a prince with a passion for all things automotive. Back in the 1950s, Prince Birabongse Bhanutej Bhanubandh of Siam became Thailand’s first Grand-Prix driver. “He raced at the 24 Hours of Le Mans twice and was asked to drive on behalf of Enzo Ferrari”, says Hunziker proudly, as he shows us around his workshop in Torrance near Los Angeles, which is around 2,000 miles away from Atlanta, his LMP1 piece and Andre Oosthuizen.

His absolute favourite subject is the Porsche itself

The diversity of this global family is reflected in the Swiss-born artist’s work, in which he blends the genetic advantages inherited from his creative family in a similar way to the acrylic paint before touching brush to canvas. Hunziker’s work encompasses everything from reinterpretations of historical racing posters and redesigns of racing jackets worn by the former Porsche factory team, to developing the perfect driving shoe for ultimate comfort on the accelerator pedal. His absolute favourite subject, however, is the Porsche itself – because the car is an object he is truly passionate about.

Hunziker’s favourite artwork isn’t one of his own, though it can often be found in his workshop in Torrance, south of Los Angeles: His secret passion is a Porsche 911 T from model year 1968. Ten years ago, he came across the sports car advertised for sale for 8,000 dollars in a newspaper advertisement in a small desert town in South Dakota, just under 2,000 kilometres from Las Vegas. Together with his then-girlfriend Heather, with whom he established the Hunziker fashion line, Nicolas collected the car in person. After a night in a motel, the couple were looking forward to the drive home.

However, that very same morning, the starter developed a fault, so they pushed the 911 down the car park exit ramp in an attempt to kick-start the engine. It worked, and the flat-6 roared into life. Over the next two days, the pair drove back to their home in Las Vegas, only daring to turn the engine off once in that time. Hunziker even left the engine running to refuel. “The whole experience really made me connect with the car. I was so angry with it. But the reliable, constant ticking over of the engine soon changed my mind”. The journey was an adventure that Hunziker and Heather – now his wife – wouldn’t forget in a hurry. They are probably also the only couple ever to have left Las Vegas to get married.

It might even be romanticism that has prevented Nicolas from washing the ivory-coloured Porsche since that fateful trip. The only part of the car that gleams is the engine: a 2.0 litre model taken from a Porsche 911 S. Hunziker likes to maintain that part of the car himself. On the interior door panels, racing icons such as Vic Elford, Jürgen Barth, Gijs van Lennep, Brian Redman, Tony Adamowicz and Howden Ganley are immortalised in ink. “I love this 911. When I get back in the Porsche after a weekend on the track, I feel like I'm still racing. No other car combines racing with everyday driving as perfectly as the Porsche 911”, says the 42-year-old artist and casual racing driver.

Alongside Porsche AG and the team behind the 24 Hours of Le Mans, Hunziker’s clients and former clients include the Gulf Racing team, James Hunt Racing and racing icons such as Stirling Moss and Carroll Shelby. Hunziker also counts Chadwick Steven McQueen, the only son of Steve McQueen, as one of his like-minded Porsche friends and enthusiasts. “When we have a weekend free, Chad and I often meet and take our 911s for a spin. The mountains around Malibu are perfect for a drive. When we pull over for a break, we chat about potential collaborations. Chad loves Porsche, just like me and his father; he comes up with some great ideas. I once did a painting for Chad of the legendary Porsche 917 no. 20 from the film ‘Le Mans’. It’s hanging above the fireplace in his living room”, Hunziker tells us proudly.

Freedom is a prerequisite for creativity

The logo of Chad McQueen’s own label, “McQueen Racing”, can now be found on many of the artist’s own products, including the carefully styled T-shirts that his wife Heather designs. Above the logo, there’s a subtle statement in small print, which if writ large on a sign, would not be out of place being chanted at a protest march: “Save the manual”.

The authentic experience of driving a Porsche relies on being the one in control and making all the decisions. Something that is vital to Hunziker as freedom is a prerequisite for creativity. He expresses this freedom in his art – and with every manual gear shift in his Porsche 911 T.