For everyone at Porsche, 2018 was a year of big numbers. The 70th anniversary of the original Porsche sports car, the 356, was the pivotal point for a series of unforgettable events around the world, and at their heart was the very car that started it all: the 356 ‘No.1’ Roadster.

This modestly powered, mid-engine two-seater was the Genesis of Ferry Porsche’s vision to create the ultimate road-going sports car. Hand built in a small workshop in Gmünd, the ‘No. 1’ broke the mould for high-quality, low volume sports cars, its ingenious engineering solutions offering for the first time the possibility of an affordable, useable alternative to the highly bespoke and expensive pre-war European standard.

The 356 ‘No.1’ Roadster was awarded its general operating permit on 8 June of 1948, officially recognising this unprecedented product as road-legal, and at the same time marking a major milestone in automotive history. Porsche was a bona fide manufacturer of sports cars.

‘No. 1’, then, is a car of singular importance to Porsche, and a slice of company history everyone was keen to share as widely as possible in its all-important anniversary year. So a small group of men and women in Zuffenhausen got around a table in mid-2017 to plan the definitive international exhibition for the original 356.

It would mean transporting this priceless 70-year-old museum piece to all four corners of the globe, and carefully coordinating its efforts with those of numerous in-house and external organisations to maximise exposure at multiple high-profile events.

The original 356 ‘No.1’ Roadster was sold shortly after its inception, and over a prolonged period in private hands underwent significant alterations. But when Porsche managed to buy the car back, it was decided that, as a piece of living history, it should remain as it was, substantially changed from Ferry’s debutante.

For the 70th anniversary then, a show car was proposed that would reveal exactly what the original looked like in 1948. This promised to be both historically fascinating and of significant logistical value for the tour, providing the organisers with a second car for static displays. Over the course of the year, both cars could travel the world, with one always staying back at base in Zuffenhausen, for visitors to the Porsche Museum to enjoy.

Experts from the museum were called in and a painstaking process began. First they measured the original car using a 3D scanner and compared the virtual result against construction drawings from 1948. This initial process highlighted numerous deviations which, when cross referenced with original photographs, record and logs from the Porsche Archive, gave an authentic impression of how the car would have looked all those years ago.

A computer-assisted milling machine was then used to shape a life-size model out of a rigid foam block. This allowed for the creation of traditional wooden jigs, the essential component in creating accurate aluminium body panels. These were then all hand-beaten by highly skilled craftsmen using the traditional tools that would have been available in 1948.

The finished show car reveals a different nose treatment and narrower rear body than the existing ‘No.1’. It also has a one-piece rear clamshell that at some point was replaced on the real car with two separate hinged sections.

Its unusual colour is also faithful to the period, for extensive testing of samples harvested from behind the ‘No.1’s’ instruments enabled Porsche’s paint specialists to closely replicate the original shade which had been overpainted many times in the intervening years.

With the show car now ready, the first stop on this momentous tour was at the ’70 Years of Porsche Sports Car’ exhibition in Berlin which ran from March until May 2018. After a short hop to Austria for an early media appearance, the original was then the star attraction at the Porsche Museum in Zuffenhausen, as the world descended for the official 70th celebrations and the opening of a special exhibition.

From here, the cars began racking up the miles, with trips to the Czech Republic, Poland and as far afield as the Sportscar Together Day in South Africa. The start of July saw the ‘No. 1’ enjoying parade laps before huge crowds at the famous Circuit de la Sarthe as part of the bi-annual Le Mans Classic, before taking part in the famous hillclimb at the Goodwood Festival of Speed. It also made two welcome appearances closer to home, first on a drive through the Bernese mountains of Switzerland, before braving stages of the mountainous Ennstal Classic in Austria.

There was no such thing as a summer recess for our Roadsters either. At the end of August, Porsche’s home-from-home on the Californian coast called, with the ‘No. 1’ shining beside a Mission E mock-up at Monterey Car Week before stealing the show at the Rennsport Reunion at Laguna Seca later in September, where Dr Wolfgang Porsche took the wheel.

The roadster also flew north to Vancouver and Toronto followed by a flight back across the Atlantic to star at the ever-popular Porsche Sound Night, at the Porsche Arena in Stuttgart. With barely time to breath, the tireless team were back on the road again, with several outings in China that lasted from October into December.

It was an extraordinary logistical challenge, coordinating teams of people from all over the world to precise and inflexible timeframes. But the opportunity to bring the most important car in our stable to tens of thousands of fans ­was the perfect birthday present. 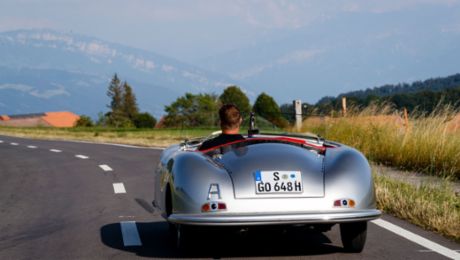