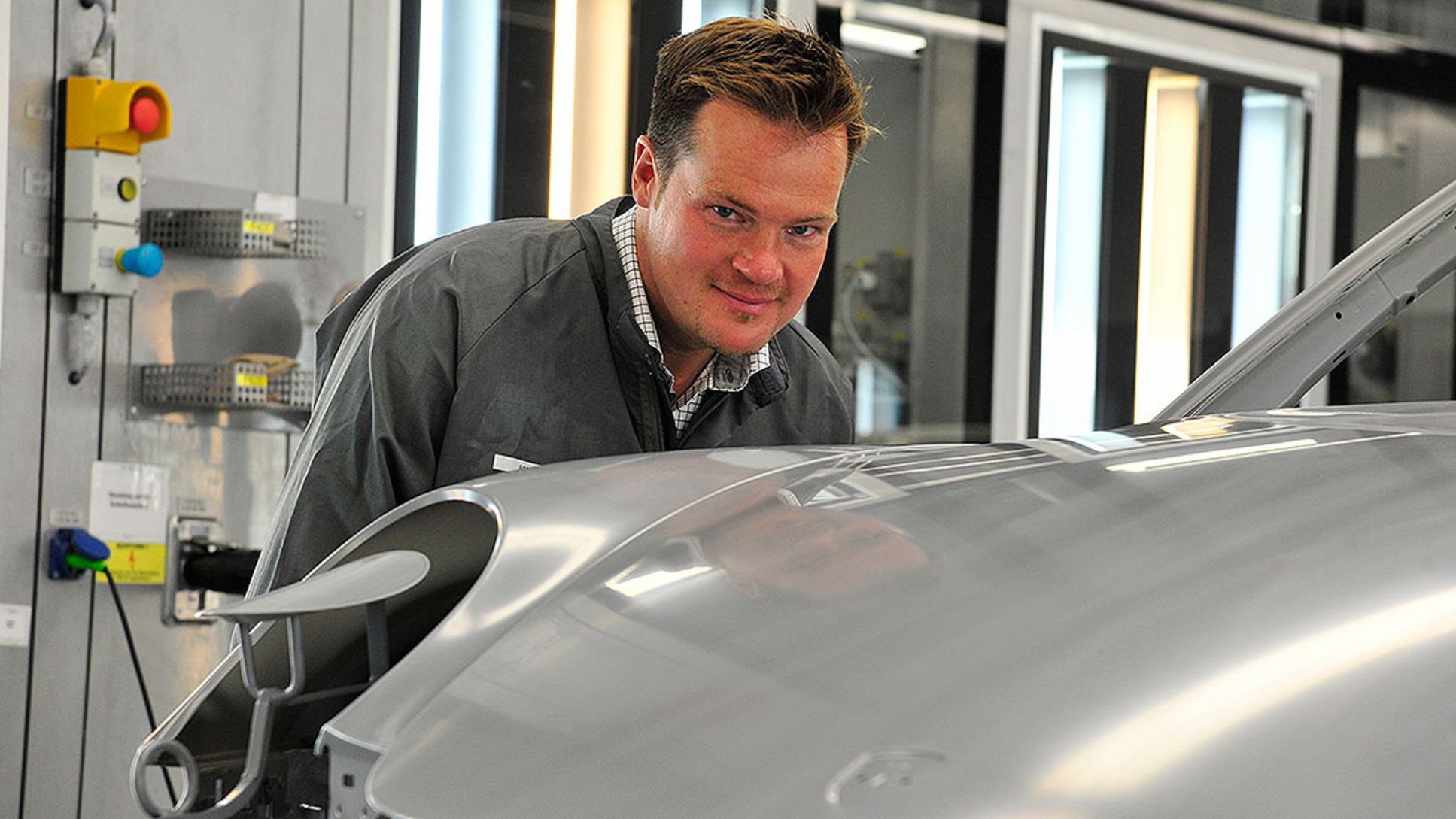 Jean Hamacher makes a childhood dream come true with the 911 Carrera 4S Cabriolet. During a special plant tour, the customer witnessed how his individual 911 evolves from many single parts.

The belt carries the six-cylinder boxer engine evenly through the hall until it stops in front of Aydin Balci. Balci takes the torque wrench that dangles from a steel rope above him and routinely re-tightens the screw-fastening of the fuel line. "Perfect," the Porsche employee in a grey overall remarks. Then the future heart of a Carrera 4S continues its four-and-one-half hour trip through the engine construction hall. "How do you know that you haven't screwed it too loosely?" presses Jean Hamacher. "The wrench would have given a signal," Balci answers. "It knows the exact torque and rotates just so long until it fits." Handiwork meets innovative technology.

It's this connection that the customer and CEO of an IT company values about Porsche. And so it came about that the owner of a Targa and a Carrera Cabriolet has opted for the brand and the 911 the third time now. "Porsche has succeeded in systematically advancing the 911 and still maintaining its identity," the 40-year-old Hamacher underscores. "That's what constitutes the priceless value of the sports car icon."

The sewing machine rattles in tempo. Ceaselessly. Despite the high speed that Natalie Pasymowski sets with her foot pedal. The Porsche enthusiast knows immediately: that's an experienced team welcoming him to the saddlery. "And a comparatively high rate of women," Hamacher remarks. Skilfully, the woman pulls the black leather, which is to become the door trim, over the needle plate. Any irregularity would become visible later – in the seams but also in the material. That's why only faultless parts reach Pasymowski's workplace; even mosquito bites are a criterion for exclusion. The leather is now brought to the vehicle assembly line "just in sequence", i.e. at the right time and in the sequence it is needed – that's something no other automaker has. Lovingly, the entrepreneur strokes the refined cowhide once more. Next time, he will be able to do it in his own Porsche.

That and a lot more. Because for the customer from Karlsruhe who is a great sports fan, the Carrera Cabriolet is a true universal weapon – whether on the Hockenheimring race track or during a skiing holiday in Sölden. "With 70 centimetres of fresh snow on the glacier road, that's where the fun begins," he makes a point, grinning. "When we're at the top, getting our snowboard and the entire equipment from the sports car, the looks from the other guests are priceless." Being conspicuous is also what the graduated economist wants with his 911. On account of the special paint job alone: Aetna Blue. While we're at it – how does the paint get on the vehicle?

Only one centimetre separates Hamacher's nose from the glass pane of the floor-to-ceiling window. His eyes follow the movements of the machine, which lowers the raw body bit by bit until it disappears head first into the blue liquid of the huge basin. The catchword is cathodic dip coating. This electro-chemical procedure prevents corrosion. Past the vehicles bathing in huge basins, the customer is guided to the next station: the filler. "Both inside and out, it ensures an even surface of the aluminium/steel body," foreman Manfred Pilz explains. The further the two men get into the 192 metre-long and 52 metre-wide building, the more acrid the harsh smell of the paint gets. "Chanel N˚ 911," says Hamacher and covers his nose with the sleeve of his visitor's coat. "I don't even consciously register it anymore," the 52-year-old professional comments. "Anyhow, the paints are all based on water these days, and the paint shop, which was opened in 2011, uses cutting-edge technology." Not least, for the sake of the environment. Another argument that speaks for Porsche. "Once I've invested so much, I want it to be invested in something good," says the customer. For him, the credos of "Made in Germany" and "Engineered by Porsche" play an important role. His money ought to stay in his home region. "It makes me proud that my 911 hails from Swabia."

"Best car in the world"

Today, he even has the chance to be best man for his 911. Because the marriage – the merging of body and engine – is about to take place. At this point, the cockpit is already fixed in its place, the wire harnesses have been laid and the pedals installed. Time for a quality check. Stand-by man Werner Schneider disappears under the open hood. He has been working at Porsche for 23 years now and has had the chance to drive a 911 himself. In his opinion, it's simply "the best car in the world". Also thanks to the work of his hands. Because Schneider knows exactly what counts: are the headlights tight? Does the fuel tank sit exactly where it should be? "Everything's perfect," says the expert with satisfaction. He taps the screen next to the conveyor several times, thus giving his O.K. to the system.

The customer doesn't notice much of all this activity. His eyes wander along the soft curves of the silhouette. The man usually so eloquent has run out of words. Hamacher is in a different world. Only him and his car. It's the first time he is encountering it. And for the first time, he sees the special paint job: Aetna Blue. Up to now, he knew the colour only from the colour scheme of the consultant. "Special but not pushy," nods the 1.90 meter-tall Hamacher to Schneider. With this, he is back in the hustle and bustle of the assembly hall.

Just in time for the big moment. The suspended conveyor transports the 911 around a 90-degree curve. In tandem with it, the chassis plus engine arrives at the scene of the action. Perfect timing. The marriage can now take place. Ömer Fidan and Uwe Klotz, to the left and right of the assembly line, guide the components to their right places. "This definitely requires team work," says Fidan. The body is lowered slowly, while he lifts the chassis by pressing a button. At the eye level of the future owner, they meet and finally merge with each other. Fidan and Klotz seal the marriage with their cordless screw drivers. "This will hold longer than many a marriage," one of the colleagues jokes. "Well, that's a load off my mind," Hamacher counters. "So now, nothing can go wrong anymore."

He is right. A few days later, he is handed the keys to cabriolet happiness in Zuffenhausen. Right before his eyes: his brand new vehicle that has been upgraded by Porsche Exclusive according to his wishes. And they were not too few. "I just ticked everything that was possible on the list of extras," says the customer and grins.

A reward – and the coming true of a childhood dream. Jean Hamacher thinks immediately of a seven-year-old boy in his neighbourhood. "He won't go to school before he has seen my Porsche in the parking lot. Then he looks at it with big eyes for minutes on end – every day," Hamacher recounts. The businessman climbs into his 911, puts the key in the ignition and opens the roof of his cabriolet. "When I was small, I felt exactly the same."