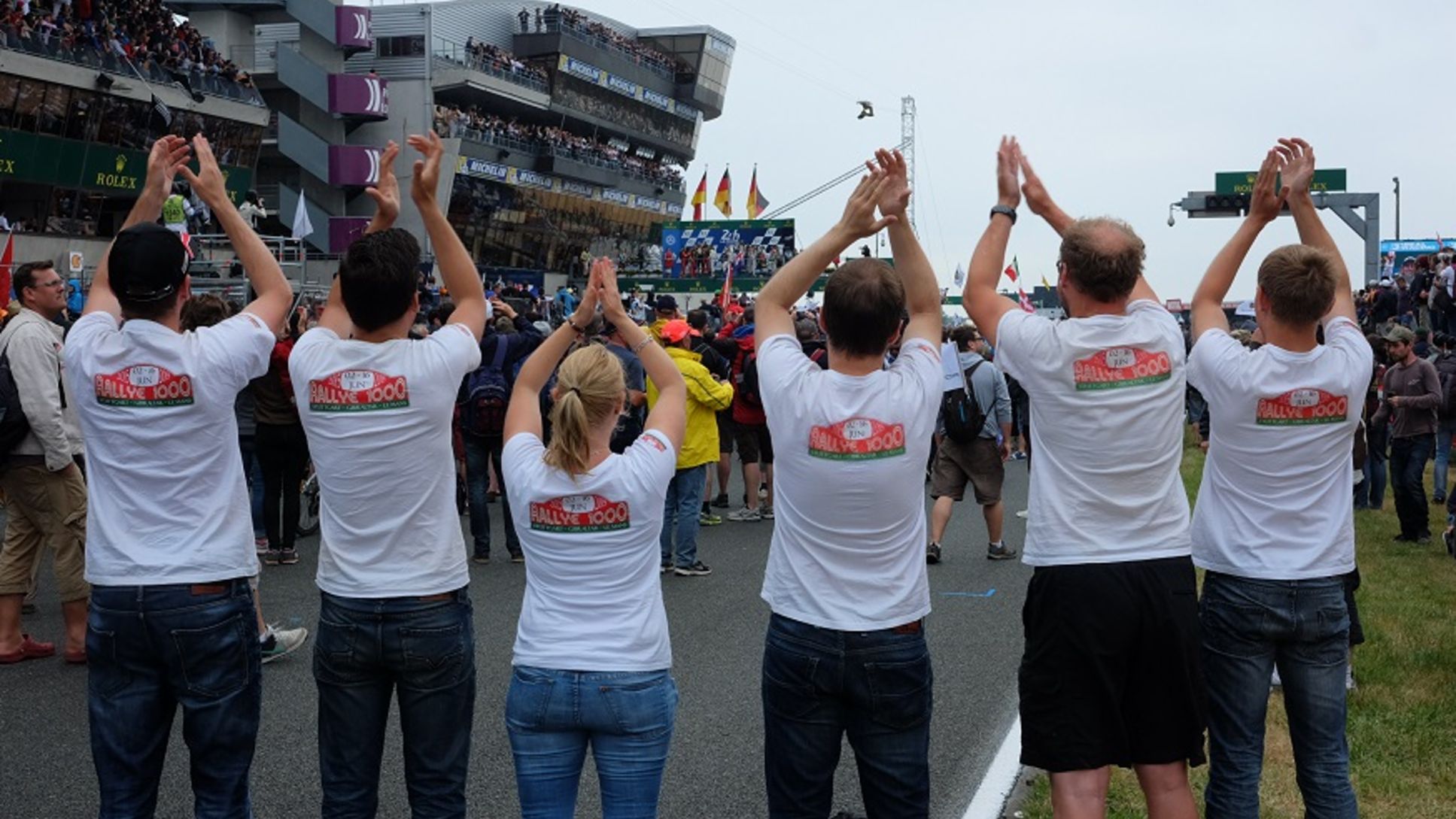 From Stuttgart to Le Mans. In two weeks. With vehicles worth a maximum of 1000 euros each. What an adventure!

It was the beginning of June. Twelve drivers, among them seven Porsche employees, and six cars were ready to start off. The mission: a rally to Le Mans. Why? To cheer Porsche on during the 24 Hours of Le Mans on 13/14 June. And because a rally like this can turn into a real adventure.

This is particularly so because of the conditions agreed. After all, the route does not go directly to the racetrack but takes in Barcelona, Gibraltar and Madrid. In total, this adds up to more than 5,000 kilometres. No easy task – in the case of these vehicles. None of them has cost more than 1000 euros. An additional 200 euros was all their owners were allowed to invest in making their vehicles fit for the rally.

At the end of June: Porsche won a double victory at Le Mans – and Rally 1000 competitors were there live. Meanwhile, they have all returned home.

This video shows you how the teams competed and what they experienced along the way:

The route started at Schloss Solitude in Stuttgart and went to the Swiss border. Then through the Gotthard tunnel and pass to Andermatt and on to Italy up to the stage finish in Turin. And all this in temperatures of 37°C. The technical systems in the cars played along except for the air conditioners.

The group then travelled via Limone and Monaco in the direction of the French border – that's when the Lancia Turbo belonging to Team 33 gave up its ghost. But after a visit to the workshop came the thumbs up: the Lancia was up and running again!

From Montpellier the route followed the coastal road on to the Spanish border. The goal that day was Barcelona.

After a sightseeing tour of the metropolis, the participants visited the oldest race track in Spain: the Terramar Autodrome. The trip that day ended at the stage finish in Valencia.

An unpleasant surprise awaited the participants in Alicante: although a strange pair of sunglasses was lying on the passenger seat of the racing Peugeot belonging to Team 18, all the valuables had disappeared. The thief had stolen a highly valuable case containing tools as well as a camera, a mobile phone and a wallet. The only consolation was that the GoPro equipment was still in place.

The route went via Marbella to Gibraltar, the southernmost point of the tour.

The Team 88 Mercedes with rust effect paint, which had otherwise run perfectly, just died in its tracks. But the problem was quickly solved. The competition had disconnected the battery on the Merc. So then it was off again towards Madrid. As the cars drove further from the Mediterranean, the temperatures rose to 38.5 degrees.

After sightseeing in Madrid, the rally squad continued travelling northwards. For the first time since the start of the rally it rained – in fact it rained in buckets. Despite all that they reached the destination of Zaragoza on schedule.

After crossing the Pyrenees the road went up through France to the Dune du Pilat, the largest shifting sand dune in the world. 2.7 kilometres long, 500 metres wide and up to 110 metres high – no wonder it left quite an impression on the Rally 1000 participants.

Today the route took them to Le Mans. After a break for breakfast in cornfields near Bordeaux, the route went along rural roads until they reached the camp-site. That's where the official Rally 1000 camp was set up, including a marquee from home. A great success: All the cars that started in Stuttgart reached the principal goal of the Rally 1000 and saw Porsche win the first three places in the qualifiers.

Rain, storm – just the weather to visit the pits.

The race starts. The Rally 1000 drivers were there live and had a great view of the race from behind the Dunlop Bridge in the Esses. At night, they went to the Porsche Corner, the well-known Le Mans Giant Wheel and the Arnage. The next morning, it was back to the circuit. After a total of 24 hours, the jubilation was gigantic: double win for Porsche at Le Mans!

The participants set off on the trip home – via Paris and Reims. When they stopped for fuel just 40 kilometres from the German-French border, there was a brief moment of shock: the BMW would not start. The fuses were checked, the rear bench seats removed and the petrol pumps were inspected and listened to, but the BMW only ran when brake cleaner fluid was sprayed on. But Team 15 did not give up. After countless jump starts, Team 11 finally tracked down the problem – a blown petrol pump fuse – and then the car sprang back to life again. The cars reached the finishing line at 17.40 – only ten minutes behind schedule – and arrived on the forecourt of the Porsche Museum in Zuffenhausen. The winners were honoured immediately: Team 15 led the race in the BMW 520i e39. Second place went to Team 18 in the Peugeot 205 CJ. Team 88 in the Mercedes C230 Sport W202 Automatic also made it to the winners' rostrum.

Instead of a champagne shower the first official Rally 1000 Cup was awarded. Congratulations!