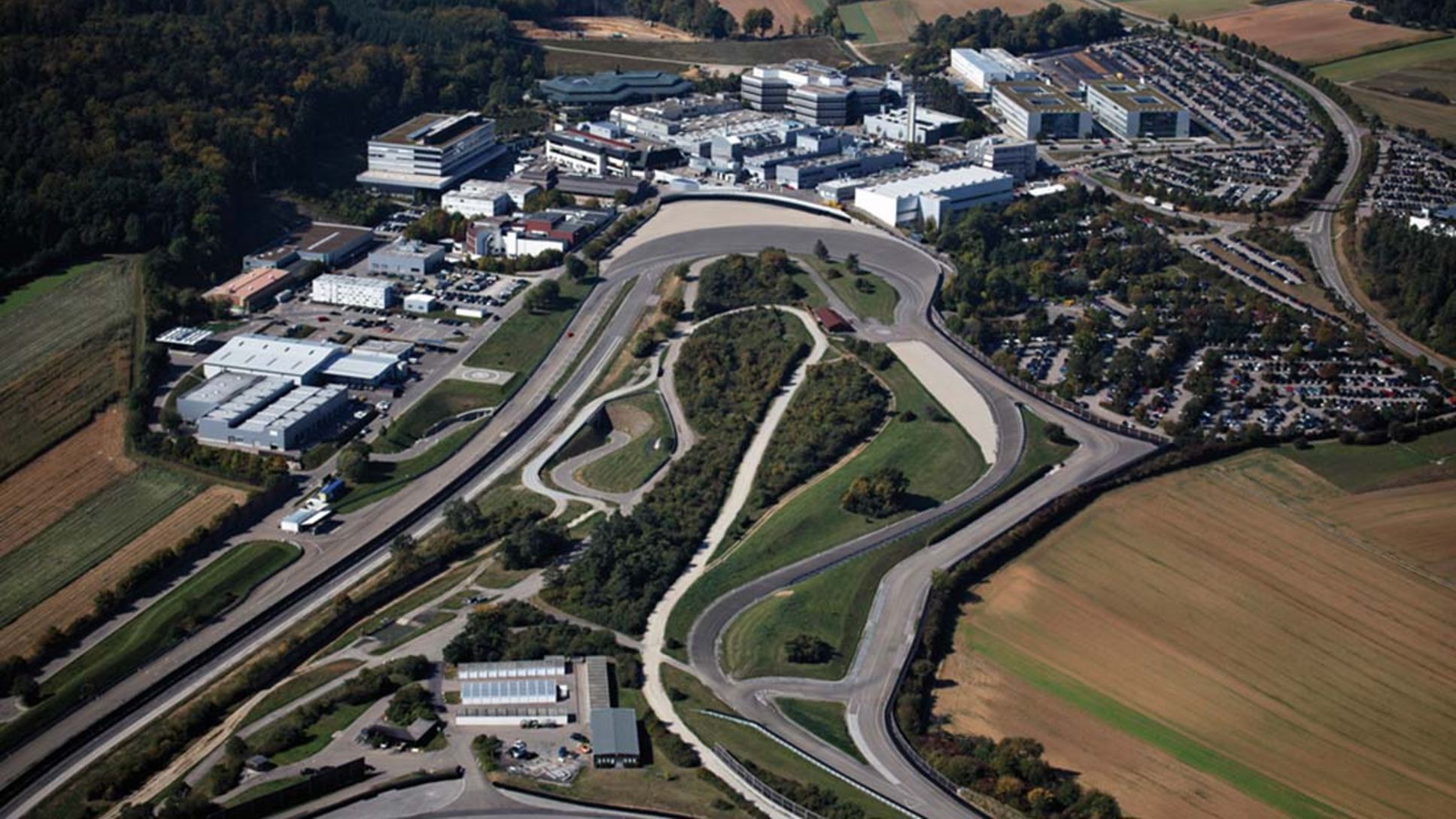 No matter where Porsche builds a car, it is always designed in Weissach. How did the art of engineering come to this small place between Stuttgart and Pforzheim?

So much secrecy was unusual, even for the special conditions that prevail in Weissach. Employees at the Porsche Development Centre are used to quite a number of security measures; in the end Weissach is the home of fast dreams and ideas. But in the summer of 2009, the guardians of the Holy Grail tightened up security measures another notch. They replaced all the locks to the workshop. Even plant security received only one key, welded in plastic and only for an absolute emergency.

The measures were instigated all because of one object that blew all proportions, even for sports cars, and makes Porsche fans all catch their breath: the 918 Spyder. However extraordinary the hybrid technology carrier may be – its origins have one thing in common with every other Porsche car: it is "engineered and designed in Weissach".

Weissach is where the elite of car design engineers meet, be it for production cars or for the race track. Concept and design, interior and exterior, making models and prototypes, testing aerodynamics and electronics, tuning engines, steering and running gear, safety engineering, crash tests, sound lab and colour optimisation, the measuring centre for environmental protection and of course the complete Porsche motor sports division – they are all located at the Weissach Development Centre (EZW).

About 6,500 people work at the Porsche dream factory – almost as many as the number of inhabitants in the little village of Weissach itself. The contrast could not be any greater. The village is full of lovingly renovated half-timbered houses and small attractive cottages, flower gardens and narrow alleys from bygone times. Then again, there are shielded high-tech laboratories where Porsche forges the future of sporty mobility – for the road and the race track. How did the art of world-class engineering find its home in this small, peaceful Swabian village?

In fact no inhabitant of Weissach could ever have imagined such a development at the end of the 1950s. It was pure chance that would one day turn the little commune into a bright spot on the radar screens of car enthusiasts all over the world. At the beginning of 1960, Ferry Porsche was on the lookout for a suitable location for a test field. He needed plenty of space to carry out comprehensive practical tests – much more than the densely built-up district of Zuffenhausen could ever offer. The new site should at least have room to build a spacious skidpad. This endless curve, a round area covered in asphalt with a diameter of just under 200 metres, is used for handling tests and fine tuning. Herbert Linge, who was working at Porsche, heard of this search and recommended the place where he lived, a small village surrounded by plenty of open fields which were only moderately suitable for agriculture. Weissach.

It was a hot tip since the village, which was only 25 kilometres from the main plant in Zuffenhausen, was an ideal match for Porsche's expansion plans. The chief negotiator with the mayors of Weissach and the neighbouring commune of Flacht was Ghislaine E. J. Kaes, Ferdinand Porsche's private secretary. Agreement was quickly reached and Porsche received final approval from the Regional Council on September 18, 1960. Already one year later, the first turf was cut and in 1962, the first Porsche ran its laps on the skidpad in Weissach.

From test track to Development Centre

Weissach showed its true potential as the test track was expanded and the site was further developed. In March 1966, the entire development division of Dr. Ing. h.c. F. Porsche KG moved from Zuffenhausen to the peaceful village. Factory and office buildings sprang up on the Weissach site. The closeness to the main plant was a major advantage; but the main factor was the plentiful amount of space available – more than enough to erect additional buildings and ensure the freedom of space for development engineers to evolve. The EZW was officially inaugurated at an opening ceremony on July 1, 1971. Since then, it has left its indelible mark on road and race tracks. Porsche developers account for more than 7,000 patents world-wide; every year, a good 400 patent applications are added to this number.

The first clarion call from Weissach reached the world community of automobile fans at the Paris Motor Show in 1974. The 911 Turbo outshone everything that the future of sports cars had to offer at the time: 260 hp, turbocharged six-cylinder flat engine, wide body and a rear spoiler that was as large as a dining table. The high-spirited beast sprinted from 0 to 100 km/h in what was for those times an unbelievable 5.5 seconds and reached a top speed of 250 km/h – more than any other German road car. From that time on, "Turbo" not only stood for elite performance from the House of Porsche. It started a legend of its own.

Since the beginnings of the Weissach Development Centre, Porsche has steadily built on the site. For example in 1981, the factory halls were expanded to a useful area of 4,000 square metres and the offices and studios were steadily enlarged. Since 1986, the wind tunnel permitted aerodynamic measurements and fine tuning with the greatest precision. Towards the end of the 1980s, the significance of Weissach in the Porsche world was underlined by installing an in-house crash test centre and expanding the test site for engines and assemblies. The EZW is still growing today.

It was only in 2014 that Porsche completed the largest development project so far in the history of the Development Centre. To the tune of 150 million euros, the company renovated the Weissach site and added three new buildings: a design studio, a wind tunnel and an electronics integration centre.