The road to perfection

Whether in extreme climates across the world or travelling between Weissach and Ludwigsburg: new Porsche vehicles cover many millions of kilometres before production starts. The newsroom accompanied the Quality/Testing Department on the job.

A round-the-world trip? More like an endurance test! When employees from the Quality/Testing Department pack their suitcases, they are heading somewhere where it’s going to be painful at best. The conditions have to be extreme. Extreme heat, from dry conditions to tropical humidity. Extreme cold, from biting conditions to pervasive damp, and all conceivable temperature gradients and air moisture levels in between. And for these test drives, roads are not necessarily a given. Ultimately, the vehicles need to be put through their paces before they go into series production so that no defects subsequently come to light.

One of the testers is Alex Ernst, Head of Sports Car Testing. "Every prototype experiences each season twice,” he explains. The vehicles, which are prepared in the Weissach workshops in close collaboration with the relevant departments, undergo thorough testing during their first tour through the climate zones. Round two of the round-the-world trip is about ensuring that "everything works perfectly", as Ernst explains. Then, it is usually just a matter of clarifying details before series production starts. To kick things off, the test drivers load up an entire jumbo jet, with 911s next to Panameras, Boxsters and Cayennes. As a rule, there are ten vehicles per series on board. Teams of 20 to 25 employees per series, taken from all development departments, travel on behind, together with the project managers. Once on the ground, the vehicles cover around 800 kilometres each day, over two and a half weeks. An endurance test for man and machine.

The daily routine is well structured: wake up at six, perhaps some form of exercise, breakfast at seven and leave at eight. Then, in the evening, everyone heads back to the hotel for a review meeting, which can last for hours. "The meetings with the entire team in one room are essential. This is where the most productive decisions are taken," emphasises Ernst. Do the drivers’ impressions tally? How do particular drivers assess the tyres’ rolling characteristics? The hardness of the chassis? Is everyone hearing the same noises? Is the seat shape comfortable for all body shapes, even over long periods? For the last three days, the development team, including Chief Development Officer Michael Steiner, has come along for the ride to exchange views with the team.

Incidentally, preparing for a trip like this isn’t just about the vehicles. The hotels, for example, are selected according to a particular criterion: "They are not allowed to disclose that we are among their guests," emphasises Ernst. He is also responsible for "disguise and secrecy". This includes, among other things, neutral clothing: no Porsche logos grace the car testers’ clothes.

Disguising the vehicles is a more difficult task. Discreet underground parking spaces are often scarce, especially in the desert regions of the USA. In such cases, the vehicles are covered with grey tarpaulin. The same applies if the vehicles start to attract too much attention for whatever reason.

There's just one thing missing: "An anti-cyclical winter," explains Ernst. If it’s summer in the northern hemisphere, winter will officially dominate the southern hemisphere. But this simply doesn't compare with the frost of Northern Canada or Finland. "We were in Chile," reports Ernst. "Although our people were frozen from the cold wind, the vehicles were not fazed by temperatures of six degrees below zero." The warm season makes things much easier for the testers. Just like the North American summer, the South African summer delivers exactly what it promises: heat. And extreme heat at that.

The final endurance test for the Cayenne Hybrid models

Porsche will soon extend its hybrid strategy to the new generation of Cayenne vehicles. 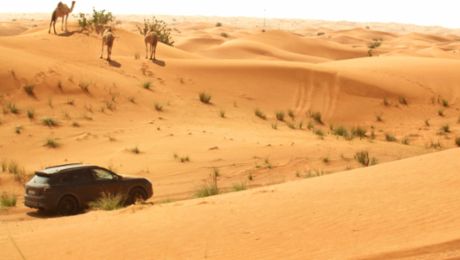 The new Panamera put through its paces

Before any Porsche goes into production, it is taken to its limits – cue Panamera!