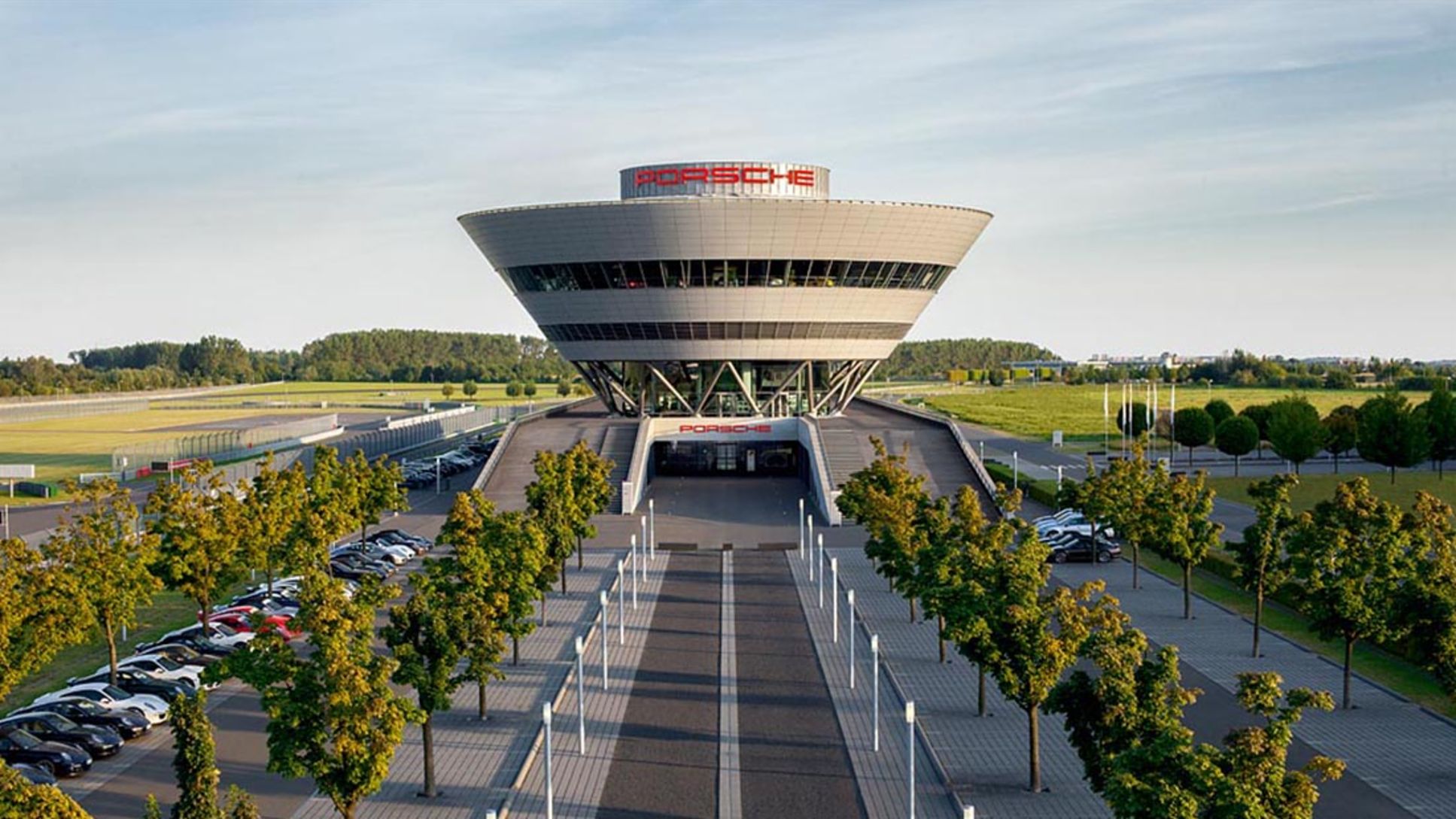 In the past 15 years Leipzig has proved itself as the second large production facility for Porsche. A success story.

The first thing you notice is the space – lots of space. The A14 motorway exit for Porsche Leipzig at Schladitzer See is in the middle of the countryside. Meadows, pastures, woodland – the contrast to the bustling confines of the main Zuffenhausen plant couldn't be greater. Porsche has been in Leipzig for a decade and a half. And the large amount of space is a cornerstone for the success of the site: space for a further full plant where the second generation Panamera will be completely produced in future; space for a large customer centre with a museum, restaurant and conference rooms; space for a special kind of factory pick-up where customers can put their Porsche through its paces on the 3.7 kilometre racetrack with eleven famous bends or the six kilometre off-road test track with 15 spectacular obstacles; space for engineering skills and craftsmanship, space for ideas and innovation. In a word: space for emotions.

Porsche Leipzig GmbH is a success story. With 65,941 Cayenne, 24,864 Panamera and 44,636 Macan, Porsche products made in Leipzig accounted for around 70 per cent of all deliveries in 2014. Of course, this success isn't explained by space alone – it is also the perfect implementation of the Porsche philosophy at the site. The combination of precision and passion, technology and infotainment from one of the world's most modern car factories and a world-class entertainment programme. At Porsche Leipzig two kinds of emotions are produced: those you can get into and touch and those you remember and talk about.

A full plant for the Macan

The example of the Macan illustrates this success story. In March 2011 Porsche gave the go-ahead for the fifth model series. The third plant expansion in Leipzig started the same year especially for the compact SUV: a new factory for a new car with a completely new team. Never before had there been anything comparable.  In 2012 the Leipzig plant was expanded to become a full plant for the Macan with an investment volume of a good 500 million euros – one of the most modern production plants worldwide that today combines body shop, paint shop and assembly on one site.

The body of the compact SUV is produced in Leipzig on an area of more than 34,500 square metres by more than 380 robots. In the adjoining shop the off-roader is then given its gleaming coloured outer skin on an area of around 60,000 square metres. In the last step – the assembly – what belongs together comes together: doors and windows, underbody and tank, body and the engines supplied from Zuffenhausen, which were previously completed on the production line next door with transmission, drive shafts, axles and the exhaust system.

The Macan became a real favourite with customers worldwide

Thanks to the typical Porsche quality, style and performance standards the Macan became a real favourite with customers worldwide in the space of just a year. The Macan sold extremely well right from its market launch in April 2014; by the end of the year around 45,000 vehicles had been sold. Since the beginning of this year the plant has been running at full capacity. The target is the production and sale of a good 60,000 vehicles by the end of 2015.

The success of the Leipzig Macan production also impacts its elegant cousin: in 2016 the first Panamera to be completely produced in Leipzig will roll off the production line. "The sporty saloon will be the second series to run through the whole production process at the Leipzig plant", says Siegfried Bülow, Chairman of the Management Board of Porsche Leipzig GmbH. Until now the pre-painted saloon bodies have been supplied by the Volkswagen plant in Hanover. In February 2015 expansion of the Leipzig plant also started for the Panamera: the production and logistics area in Saxony will be expanded by a good 70,000 square metres for body production and painting; once again the company is investing around 500 million euros in the site.

Porsche as a driving force of the economy

With employment growth of 2.5 per cent for Leipzig the forecast for 2015 is very positive – according to the Institute for Employment Research nowhere else in Germany has such a high growth rate. Porsche has constantly contributed to this exceptional economic growth since the site opened: the first jobs were created at Porsche Leipzig in February 2000, and by 2008 there were already 500 employees. Today, the sports car manufacturer has around 3000 employees in the region and this trend is set to rise with the entire production of the Panamera. "In Leipzig all signs are pointing to continued growth in future", says Siegfried Bülow. The expansion of the Panamera production will create hundreds of new jobs. Porsche is employing 250 engineers for the areas of body construction, quality, logistics and planning alone. 100 have already joined the company. In addition, the recruitment of more than 100 production staff is starting.

However, there is one sad note for Saxony: the Cayenne will be leaving Leipzig. From 2016 onwards the SUV will be built in Bratislava, Slovakia. Long-serving employees will miss it as it was with the Cayenne that the Leipzig success story started in the late 1990s. When it became clear that the Porsche family would be growing with the sporty SUV more space was needed – space that Zuffenhausen was not able to offer. A modern industry location was called for as the ideal "second home", a place with excellent transport links and – looking to the future – with plenty of space for possible expansion.

A total of 17 sites throughout Germany were examined and appraised in terms of these factors. Leipzig had the best prerequisites. The largest city in Saxony is an important hub – not only for trade and industry but also for the fields of education, administration and culture. For example, the University of Leipzig – Germany's second oldest university in continuous existence – was home to some of the country's greatest poets and thinkers over the centuries.

Goethe, Lessing, Nietzsche, Heisenberg and Hertz can't be wrong: Leipzig is the ideal place for big ideas and trailblazing innovations. But first and foremost it is the people in Leipzig and the quality of the skilled workers that convince: "People in the East are born engineers", car manager Carl H. Hahn, CEO of the Volkswagen Group when the Berlin Wall fell, says enthusiastically. "It's in their genes."

So the decision was easy and it was made in September 1999: the Cayenne as the youngest member of the Porsche family at that time would be assembled in the Saxon city. As befitting a sports car manufacturer, the development of the new site progressed at a rapid pace: the ground-breaking ceremony in February 2000, completion of the production hall, start of construction of the customer centre and the plant's own test track the following spring. December 2002 saw an emotional moment: the first Cayenne rolled off the production line.

Made in Leipzig: quality and exclusivity

The first Cayenne did not stay alone for long. Just a year and a half after production started 50,000 vehicles had rolled off the production line. What's more, a further high-calibre model moved to the East: the super sports car Carrera GT. From 2003 a limited edition of 1270 vehicles of the stylish sprinter was handcrafted in the Leipzig studio. The final accolade for the new site: in 2006 the decision was made to produce the Panamera in Leipzig as well. In the course of the second plant expansion a 25,000 square metre production hall and a 23,500 square metre logistics centre were built for the Gran Turismo.

With precision, hard work and ambition, in the space of a decade the Leipzig site has become an indispensable second mainstay of the sports car manufacturer from Zuffenhausen. Porsche Leipzig GmbH has become far more than just a further plant. It has proved itself as an independent centre for sports car culture. The term "sports car" has been redefined in Leipzig – with power and comfort. It is no coincidence that this is happening where the required space is available. Space for new ideas and new approaches – in every respect.

Commitment to the region

Porsche is committed to Leipzig and the region.