From lacquerer to Deputy Chairman of the Supervisory Board: as Head of the Works Council, Uwe Hück is responsible for the concerns of employees at Porsche. He learnt to fight for justice at an early age.

A dozen or so youths are spending their time in the small gymnasium of a school in Pforzheim. The air is stuffy, sweat is dripping onto the floor. Fragments of sentences in a variety of accents can be heard, interrupted by short cries and the dull thud of blows being landed. In the middle of the sports hall stands a giant of a man, almost two metres tall and with shoulders as broad as a bear. When others flop in their armchairs in front of the TV after a day at work, Uwe Hück comes back into action: as a Thai boxer, a trainer and generally someone to turn to, but above all as a role model. He knows how important that is from his own painful experience.

"I can't claim to have had a good start in life. I was brought up in a children's home and was unlikely to have any breaks in life." The prospects were grim when the young Uwe Hück took stock. Nobody at that time could possibly have believed that he would one day become Chairman of the General Works Council and Deputy Chairman of the Supervisory Board of Porsche AG.

He was born in Stuttgart in 1962 and his parents died early. He grew up in care homes and quickly rubbed people up the wrong way. "No doubt the management of the home thought that I was a special needs pupil with learning difficulties who, with a little luck, might just manage to get a job as an unskilled labourer." However, the orphan quickly learnt to battle through life and make his own way. He took the step from special school to secondary school, promptly leapfrogging two grades. At the age of 15, he took up an apprenticeship as a painter and lacquerer – and discovered his first passion: Thai boxing.

A Thai boxer comes to Porsche

The sport gave him support and self-confidence. Respecting the opponent without fearing him. Strictly adhering to the rules of the martial art. Remaining fair despite the tough nature of the sport. These are all principles that not only apply in the ring – but also provided the young Uwe Hück with a foundation for his future successes. Initially at the sporting level: he became the European Champion in Thai boxing on two occasions and then applied to Porsche. On April 1, 1985, the Stuttgart-based sports car maker took him on as a spray painter.

Hück intended to use the job to finance his career as a professional sportsman but soon realised that Porsche was more than an intermediate stop. Numerous employees also noticed the qualities of their new colleague. After only two years in the company, Hück was elected as a shop steward in 1987. In the lead-up to the Works Council elections in 1990, people kept asking him whether he wanted to stand as a candidate. He did indeed – and was elected: the then 28-year-old received 1171 votes.

"I would soon be fighting for a large number of people," writes Hück in his autobiography “Volle Drehzahl” (At full revs), which was published in 2012 by Campus-Verlag, when describing his early days as a member of the Works Council for the Porsche plants at Zuffenhausen and Ludwigsburg. He quickly made a name for himself within the company. He gained further qualifications, becoming an expert in the law concerning labour, collective bargaining and social affairs.

Success in the Works Council

His hard work was rewarded. In 1997 the 35-year-old was elected Chairman of the Works Council for Zuffenhausen and Ludwigsburg. In the meantime, Porsche had been suffering some turbulent times: falling sales figures and increasing losses at the beginning of the 1990s had been threatening the existence of the traditional company. "We had been stewing in our own juices for too long," say Hück explaining how the crisis came about. Porsche reacted by closely examining all the processes and procedures, and the company underwent a complete restructuring operation. During this phase of radical upheaval, someone like Hück, who discusses problems openly and directly and strives to find solutions, was every well received amongst the workforce.

On March 27, 1998, Ferry Porsche died at the age of 88 years. Uwe Hück, who particularly appreciates the modern and responsible management style of the company founder, delivered the funeral oration. "I didn’t want to commemorate the outstanding technician and ingenious designer, but concentrate on this fascinating person and his great sense of social responsibility," said Hück, who has adopted Ferry Porsche’s maxims. From this time on "generating profits in order to defend social commitment" became one of the Works Council leader’s key principles.

Many achievements with the Executive Board

During these years Uwe Hück set a great deal in motion with the Executive Board. Examples include the decision to produce the innovative 918 Spyder super sports car at a manufactory in Zuffenhausen. In general, sports car production at the main plant is continuously being revised in order to make it more efficient and flexible and thus safeguard jobs at Porsche in the long term – this is one of the objectives to which Executive Board and Works Council are committed. The German sites also receive a high level of investment for modernisation and extension. Porsche is growing and it remains extremely profitable.

In all these achievements, including the personal successes, there is one thing that the qualified painter has never forgotten: that there are people who are less fortunate. People who have not been given a chance. These are the people for whom Hück campaigns – through a whole series of social projects. One example of this is Hück’s voluntary work as Chairman of the General Management Board and as Thai boxing trainer for FSV Buckenberg – a sports club from Pforzheim which mainly deals with the social integration of young people. Hück is an ambassador for the specialist education and training fair Didacta and the anti-racism group "Respekt!" as well as a member of the board of trustees of Kinderlandstiftung Baden-Württemberg, a foundation dedicated to promoting living and development conditions for children within the federal state. In September 2013, he founded his very own learning trust.

Whether for children of all ages from socially deprived conditions, people from migrant backgrounds or his colleagues from Porsche, Uwe Hück boxes his way through life and has carved out a remarkable career. Today he wants to give back some of his successes to others – and preserve the legend that has made Porsche world famous. 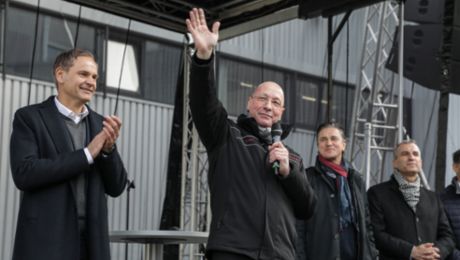 After a good thirty years at Porsche: Uwe Hück steps up his social commitment

Uwe Hück intends in future to further concentrate his attention on his social commitment, foundation, and children, as well as increasing his engagement in politics.

In the ring: Hück vs. Botha

Uwe Hück, Head of the Works Council at Porsche, climbed into the ring for a good cause.