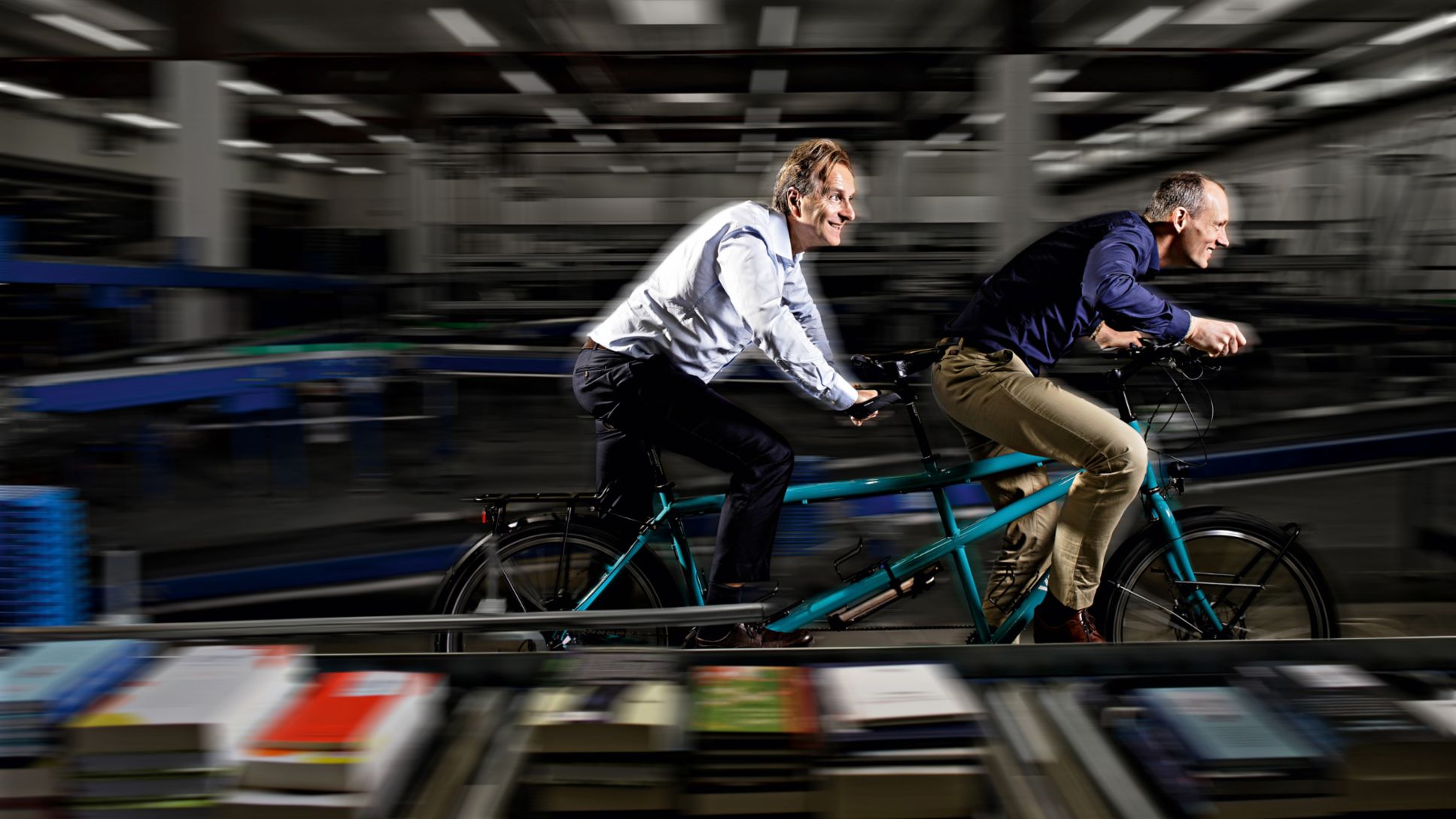 Hartmut Falter and Christian Riethmüller are an unusual tandem. In competing with major online booksellers, these two businessmen rely on athleticism, fitness, and discipline. Their shops have a single aim—to satisfy their customers.

Twenty or thirty years ago, bookstores could be found in some of the most prominent downtown locations. Today hardly any bookseller can afford that. Around 400 shops in Germany closed in the period from 2010 to 2014 alone. Two medium-sized regional chains are rising to the challenge and are also working closely together. Both are family-run companies with long traditions. And both have learned from the discount sector and from consulting services how to focus on efficiency.

Christian Riethmüller, a managing director of Osiander, and Hartmut Falter, an executive partner of Mayersche, are making substantial changes to their companies. They are combining brick-and-mortar bookstores with online services and e-readers. At the same time and with the support of Porsche Consulting, they are restructuring the work at their stores to give their employees considerably more time with customers. They are posting substantial sales, in part due to additional products that often bring better profit margins than books, which in Germany are subject to retail price maintenance. Riethmüller and Falter do a lot of things together, such as their project with Porsche Consulting. And finally, neither minces words when it comes to criticizing publishing houses and book fairs, or to praising their main competitor Amazon.

Learning from the competition

Last year the two businessmen traveled to Seattle, where Amazon had opened one of its first bookstores—in a relatively small space with a very narrow range of around 6,000 titles. Falter summarizes what they learned from their visit: “Amazon determines what to offer based on algorithms from the online business, not on the expertise of industry specialists and employees. That kind of individual expertise is not transferrable. The range of titles is extremely reduced, but even in Germany our spaces are getting smaller. These days, large stores with more than 2,000 square meters of floor space only make sense in cities with more than half a million people.” What impressed the two Germans on their trip to Seattle was the way customers are approached and advised. As Riethmüller explains, “When you enter the store, they really see you and place a priority on serving you.” That is possible because the employees’ job description consists almost exclusively of advising customers. The book industry in Germany could learn from this, as an analysis by Porsche Consulting showed. Osiander and Mayersche employees were spending only twenty percent of their time talking with customers. The (large) remainder of their time was spent on activities like sorting, shelving, repackaging, and ordering.

The results of the study surprised not only the two directors but also their staffs. The retail sector can benefit here from the material flow expertise in the automotive industry. So at two pilot shops for each of the companies, the consultants introduced measures such as sorting books from carts that take set routes through the stores. In addition, employees now shelve books before the stores open. This has given them more time for customers. The incoming goods process was organized more efficiently, as was that for returning books to wholesalers and publishing houses. And each shop now has core times for “power selling,” when all staff members except for cashiers engage exclusively in customer consultations.

In parallel to these pilot projects, the experts from Porsche Consulting trained some of the employees to be trainers themselves for continuous improvement processes. A manual entitled More Time for Customers was developed. With the help of this manual, the trainers can explain the project results to other branches and assist those teams in implementing the changes there too. At the pilot branches, the amount of time spent advising customers has more than doubled: from twenty to fifty percent. This is still not as much as at the Amazon bookstore, but that doesn’t worry the German managers. As Riethmüller notes, “Our employees have much more expertise than the people at Amazon. If we can succeed in combining this expertise with an enthusiasm for sales and in accomplishing the auxiliary tasks more efficiently, we will definitely be better.”

The fact that you won’t see Mayersche or Osiander staff juggling stacks of books or shelving them during opening hours is a result of the work with Porsche Consulting. Here are some of the steps being taken at the 87 branch locations of the two companies:

Shelving: Instead of placing books in crates, they go directly to carts that take set routes through the shops. This shortens walking distances, and presents a more orderly appearance.

Cash registers and order shelves: The operative principle here is “neat and clean,” so books awaiting pick-up can be quickly located and handed out.

Power selling: During specified core times, all employees (including branch managers) concentrate entirely on sales, with each employee assigned to a specific part of the store.