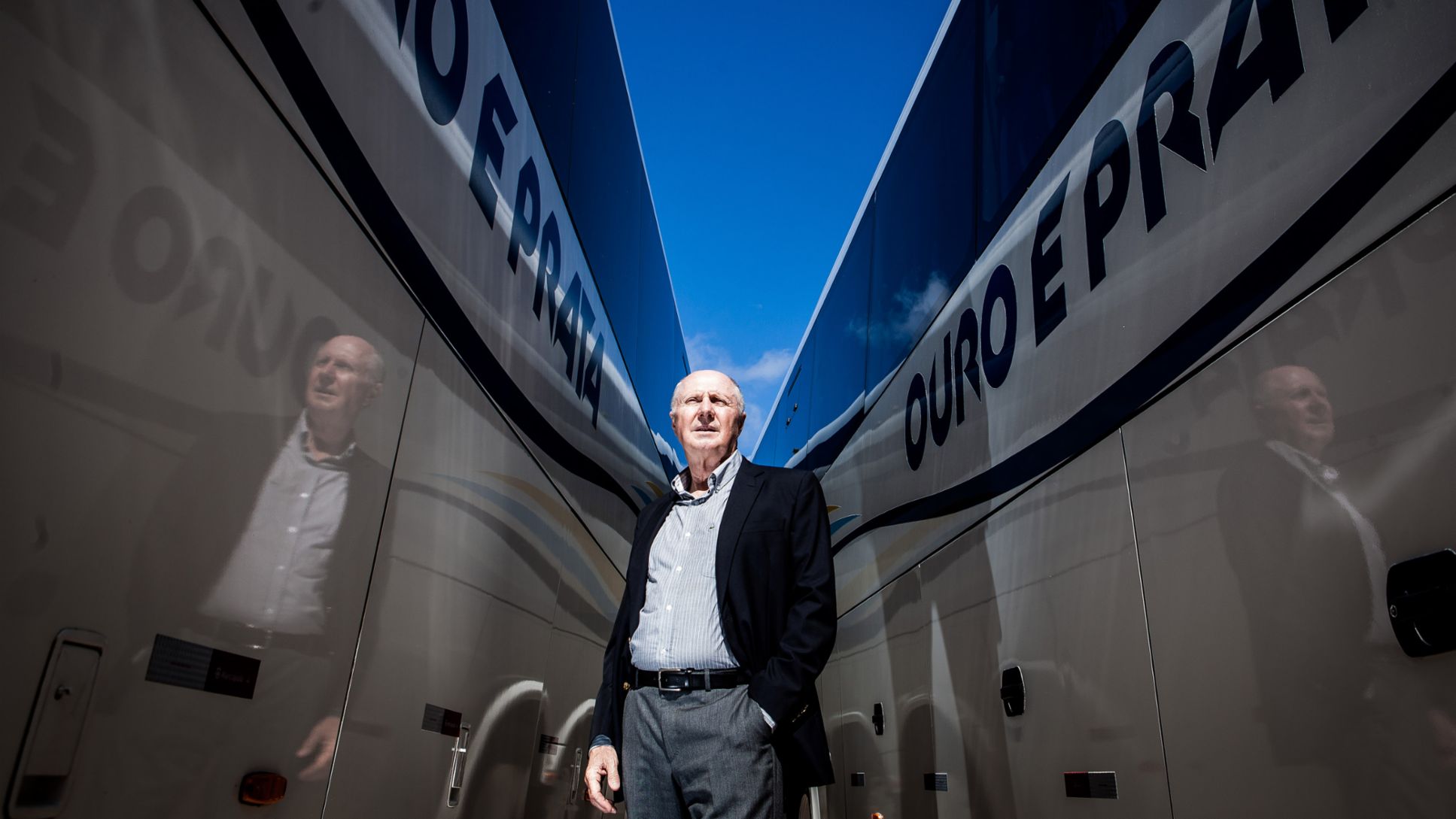 What comes to mind when we think of long-distance bus travel? Long hours on the freeway, cramped quarters, stale air, and even old pieces of chewing gum on the uncomfortable seats. But those times are a thing of the past—at least in some parts of the world. When Hugo Fleck travels, he prefers to do so by bus. “Buses are the simplest, safest, and most enjoyable way to cover long distances in Brazil,” says the owner of the transport company known as Ouro e Prata—or “Gold and Silver.” This brand is his mission. But more on that later.

Whereas in Germany the intercity bus market has been deregulated only since 2013, buses have provided the lion’s share of long-distance travel in this Latin American country for decades. “Ninety percent of the Brazilian population uses this means of transportation,” says Fleck. Ouro e Prata serves around 3.6 million people a year throughout Brazil. Buses are popular not only among those of limited means, but also among business travelers and the established middle class. What has long been a standard feature of air travel is also becoming more common on buses: the basic service consists of safe transportation from A to B, and passengers who place a higher priority on comfort can book additional services—similar to business or first class on planes. There is, however, one key difference: the various travel classes are not available on one and the same bus—instead, passengers choose among various types of vehicles.

Luxury buses known as “Ônibus Executivo” offer the highest level of comfort. They have only 26 seats, which are especially wide and comfortable and allow passengers to recline completely. Onboard entertainment and meals are included. “Many of our customers use the bus as an office on wheels,” explains Fleck. There are sockets for laptops at every seat plus high-speed Internet. Overnight travelers with Ouro e Prata arrive well rested at their destinations the next day—many tourists also save hotel costs by covering the distance to their next stop in their sleep.

The fact that a certain bus culture has developed in Brazil is related not only to the open quality often associated with Brazilian society. The country’s infrastructure also does not offer any real alternatives. Its railway network is poorly developed, and airlines concentrate on connecting the state capitals of this vast nation. For other destinations and for distances of up to 500 kilometers, buses are often the best or even the only option. “Even car owners are starting to take buses more often,” says Fleck. Buses are not only more economical, but also safer and easier. “Many roads are in miserable condition and there’s a lot of congestion—it’s not much fun if you’re the one sitting behind the wheel.” Brazilians are also becoming increasingly aware of environmental issues. Not to mention the fact that it’s hard to beat the price of traveling by bus. For example, the trip of more than 500 kilometers from Porto Alegre to Santa Rosa near the Argentinean border costs between 35 and 65 dollars, depending on the bus category.

Ouro e Prata operates 90 bus lines that connect more than 260 cities throughout the country. It offers especially frequent service around its company headquarters in Porto Alegre, in the state of Rio Grande do Sul. The longest line runs from Porto Alegre in the south to the northern city of Santarém directly on the Amazon. It covers nearly 4,000 kilometers, takes 72 hours, and uses ten drivers. A glance at the passengers on board can be like viewing a cross-section of society. They include everyone from young people traveling to other cities for their studies to senior citizens with long journeys to medical appointments. And Fleck is convinced that buses will remain a model for success well into the future.

The Fleck family has roots in the German state of Baden-Württemberg. The great-great-great-grandparents of Hugo Fleck emigrated from there to Brazil in 1846. Hugo’s father Willy founded one of Brazil’s first public transportation companies more than 75 years ago, together with his brother Raimundo. Their first fleet consisted of three open trucks. The Fleck brothers could hardly have faced more difficult conditions. They launched their company in 1939 when World War Two was beginning to rage. Brazil was suffering from fuel shortages, and its network of roads was far from developed. The Flecks used simple means to provide sought-after transportation—and gradually made their services more professional.

Moving the nation – also on water

Willy’s son Hugo now leads a company of more than 1,000 employees. At 63 years of age, he is always looking for new ways to move the people of Brazil around. “Whenever possible I book trips with our competitors, both at home and abroad,” he says. “Sometimes that gives me good ideas.” An innovation team keeps track of trends and developments in traffic and transportation. “In a family-run company each new generation has to maintain leadership by coming up with innovations and generating new growth,” he notes. “We will always focus on passenger transportation, but we are also pursuing further development.” In addition to its bus business, the Ouro e Prata Group is active in other sectors connected to transportation. Ever since the early days, the company has carried not only people and their luggage but also mail. A rising level of online orders has injected new life into Ouro e Prata’s delivery service.

The company’s greatest growth, however, is not taking place on dusty roads but rather on waterways. “In addition to acquiring new bus lines, we’re expanding our ferry services more and more,” says this CEO of a group whose member companies also build ships and provide food service on ferries. “Brazil is full of rivers and lakes. The conditions here are perfect for rapid and convenient transport by ship,” he adds. Working together with Porsche Consulting, Ouro e Prata developed a strategy for 2020. “It has very ambitious aims,” says Fleck. In order to reach them, some organizational requirements first have to be met. “We were struggling with high levels of waste, and asked ourselves how we could achieve large profit margins. Porsche Consulting helped us to set up an efficient structure.”

Gold and silver for employees and customers

Porsche consultants and the employees of Ouro e Prata have been developing ways to make concrete improvements in joint workshops held since 2013. Improvements have taken place everywhere, from administrative units such as IT, purchasing, and accounting to operational tasks including bus maintenance and conditioning. This holistic approach has brought tangible results. For example, the time spent on readying buses for their next trip has been cut by up to 60 percent, and productivity has shot up. Fleck observes, “We were quickly convinced by Porsche Consulting’s approach and its model. They are simple and efficient.” Today this cultural change has spread throughout the entire company.

Throughout all these changes, the boss keeps a constant eye on the well-being of his staff. He proudly reports that more than 90 percent of the employees are fully satisfied with their jobs. “The culture of improvement is becoming more established every day,” he says. “That pays off financially, but it also plays a role in the positive atmosphere at the company.” Whether he’s thinking of employees or customers, one thing is crystal clear to Hugo Fleck: Ouro e Prata is not only the name of his company, it’s also the measure of all things— the gold and silver standard.