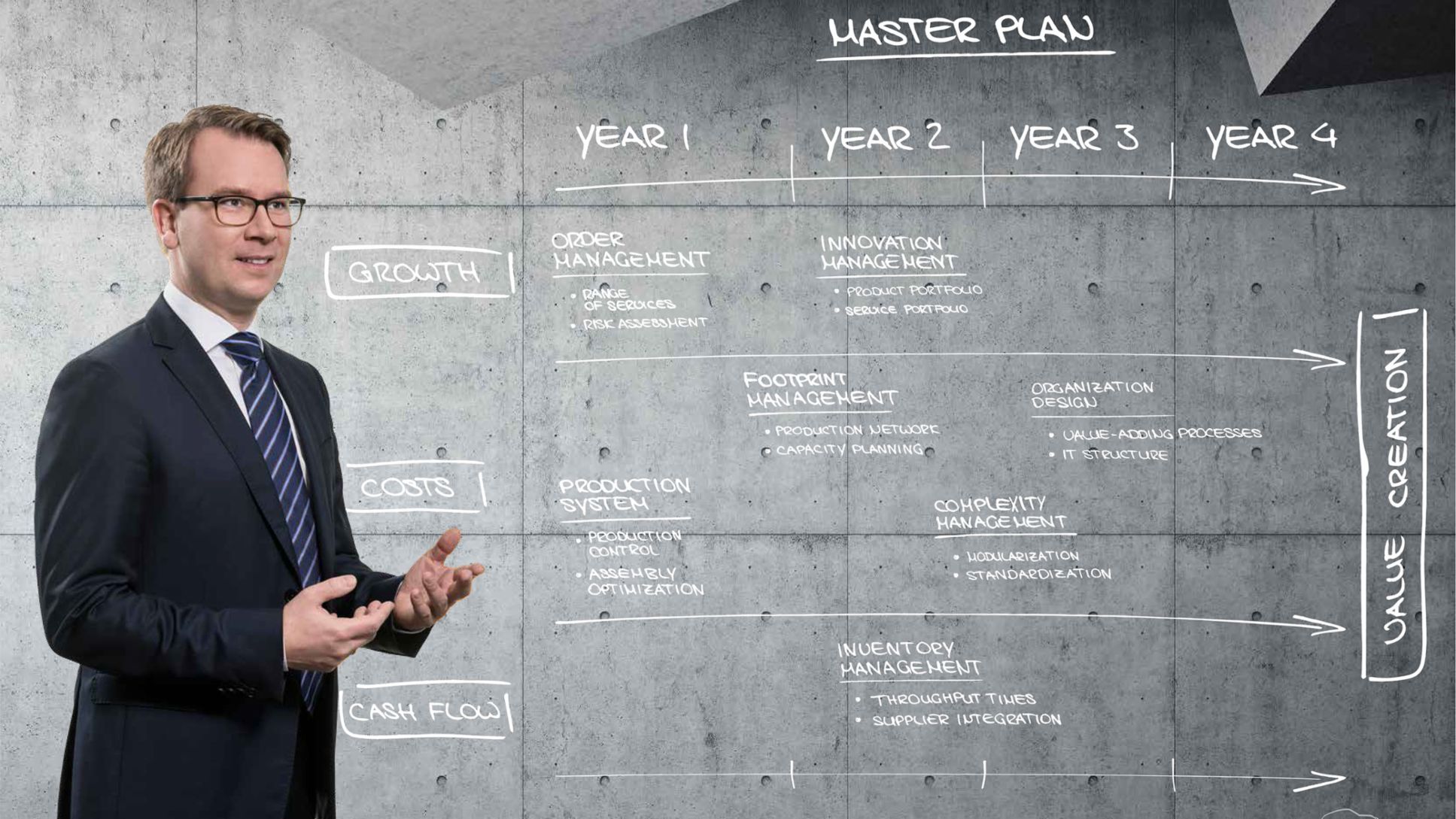 How the Gehring machine tool company is using a master plan to enhance its value - with the help of Porsche Consulting.

There is something symbolic about the entrance to the company headquarters. The foyer itself displays the sober pastel charm of the preceding century. But the first thing to catch your eye is a banner as high as a person sporting a vibrant logo and the slogan “One Gehring.” Tradition meets innovation.

Gehring is one of those mid-cap companies typical of the area around Stuttgart, the automotive metropolis of Germany. For 90 years, it has been making systems that use a honing process to finish the cylindrical surfaces in combustion engines. This process uses a stone that is partly composed of diamonds. The stone cuts microscopic lines in the surfaces, which fill with oil and consequently enhance the sliding properties. The lower the friction the lower the wear. Which is why the process is very important for improving the efficiency of gasoline and diesel engines. The aviation, aeronautic, hydraulic, pneumatic, and tool-making industries also benefit from honing.

The leader in honing technology worldwide

Experience coupled with the inventive spirit typical of this part of Germany have made Gehring the leader in honing technology worldwide for decades. In addition to its main production plants in Germany, the company has subsidiaries in France, the USA, Brazil, India, and China. Gehring currently has nearly 800 employees worldwide, 530 of whom work in its home country. In 2012 the Penta Investments group bought a majority share in Gehring Technologies with the dual aims of accelerating the group’s growth and of raising the company’s value. Shortly thereafter, a company-wide value-raising program was rolled out with the support of Porsche Consulting. “This approach is designed to bring together all the strengths of the company,” says Schöning, who as CEO holds all the reins and directs the program.

The “One Gehring” slogan captures the impetus behind the program. Its cornerstones consist of uniformly high quality standards worldwide, uniform machine concepts for customers, and company-wide alignment with best-practice processes. Efficient use of resources is a firmly established component in Gehring’s business strategy. A good example of this is the top priority that the company places on reducing CO₂ emissions in combustion engines. “That is also a guiding principle behind our development work on technology and machinery,” says Schöning. In addition, Gehring is committed to customer orientation and to consistent action based on the expertise of the company and its employees.

These cornerstones form the objective. An ambitious action plan describes how this objective is to be achieved. Four-year targets were specified and an organization was created to achieve the “One Gehring” idea. For example, all the sales personnel became one team, all the plants were placed under one leadership, and service activities were given a uniform global structure. This generated an almost completely new leadership structure at the company. Right from the start, Schöning placed a priority on involving lower-level managers and staff in planning, training, and communications. The plan worked. The team is highly motivated to lift the long-standing company to new heights with the help of innovation.

Planned to extend over a period of four years, the value-creation program focuses on the three core goals of ensuring growth, reducing costs, and increasing liquidity. A project management office (PMO) was established for central coordinating purposes. Its team serves as contacts for the managers and project directors, and its uniform measurements ensure comprehensive transparency on the program’s progress. A special feature of the implementation strategy consists of tackling several major projects on a quarterly basis each year. The agenda for the first year, for example, included optimizing order management in order to increase growth and ensure the profitability of individual contracts. In parallel to this, production management was examined in order to save costs by optimizing assembly and production control. “Ultimately the best motivator is success,” says Schöning, because the positive results of these measures gave the projects a real boost in the second year. Strict innovation management has since ensured that products and services are continuously adapted to meet market needs. “We started off with 22 service products,” he says about one major source of greater sales. “We’re now at 32 and we want to reach 42.”

The second year focused on optimizing footprint management within the production network and on optimizing capacity planning. This yielded significant labor cost benefits and also increased lead times. In addition, the rollout for a new, uniform, global SAP system was launched. In the third year, Gehring sought to further streamline its machine series by means of modularization, which has already paid off to the tune of double-digit cost reductions.

The company took the modular matrix principle that has proven itself in the automotive industry and applied it to its machine tools. Less product complexity enables lower material and overhead costs. Gehring also wants to prevent unnecessary inventory by means of shorter throughput times and closer cooperation with suppliers. The key here consists of tightly coordinated demand and capacity planning, ranging from order intake to final delivery and approval by customers.

Implementation of the program down to the last detail

Sebastian Schöning knows every individual part of the value-creation program. Each month the 40-year-old CEO and his executive colleagues spend two days analyzing the projects in order to ensure timely implementation of the program down to the last detail. The interim results after two years are impressive. “I don’t think we could have achieved much more,” he says. “We’re on the right track toward significantly raising our profitability.”

Sales in the service area alone, for example, rose by around 45 percent thanks to the new products. Savings in material costs have considerably exceeded the target value of five percent a year. An indication of how committed the employees are to the company goals is the productivity rate, which has risen by more than ten percent. And closer cooperation with suppliers means that their on-time delivery rate has risen to more than 90 percent with a five-day tolerance.

“Our goal is to secure long-term sustainable growth for Gehring,” says Schöning in summarizing the project. For a machining company, that means investing in innovations. Every year the honing specialists want to bring new technologies and further developed machinery and services onto the market. And that too has a long tradition at Gehring.

Value enhancement can be planned. To attain the synchronized worldwide goal of “One Gehring,” the company is implementing a four-year master plan. Each year, it executes measures to reduce costs, increase liquidity, and ensure growth, in order to increase its value. “In this type of program it’s important to monitor the key performance indicators closely. This enables you to maintain transparency at all times. Action can be taken immediately if there are deviations from the plan,” says Porsche consultant Wolfgang Freibichler. Another very important element: “You need visible successes starting in the first year, in order to motivate people and accelerate further action.”