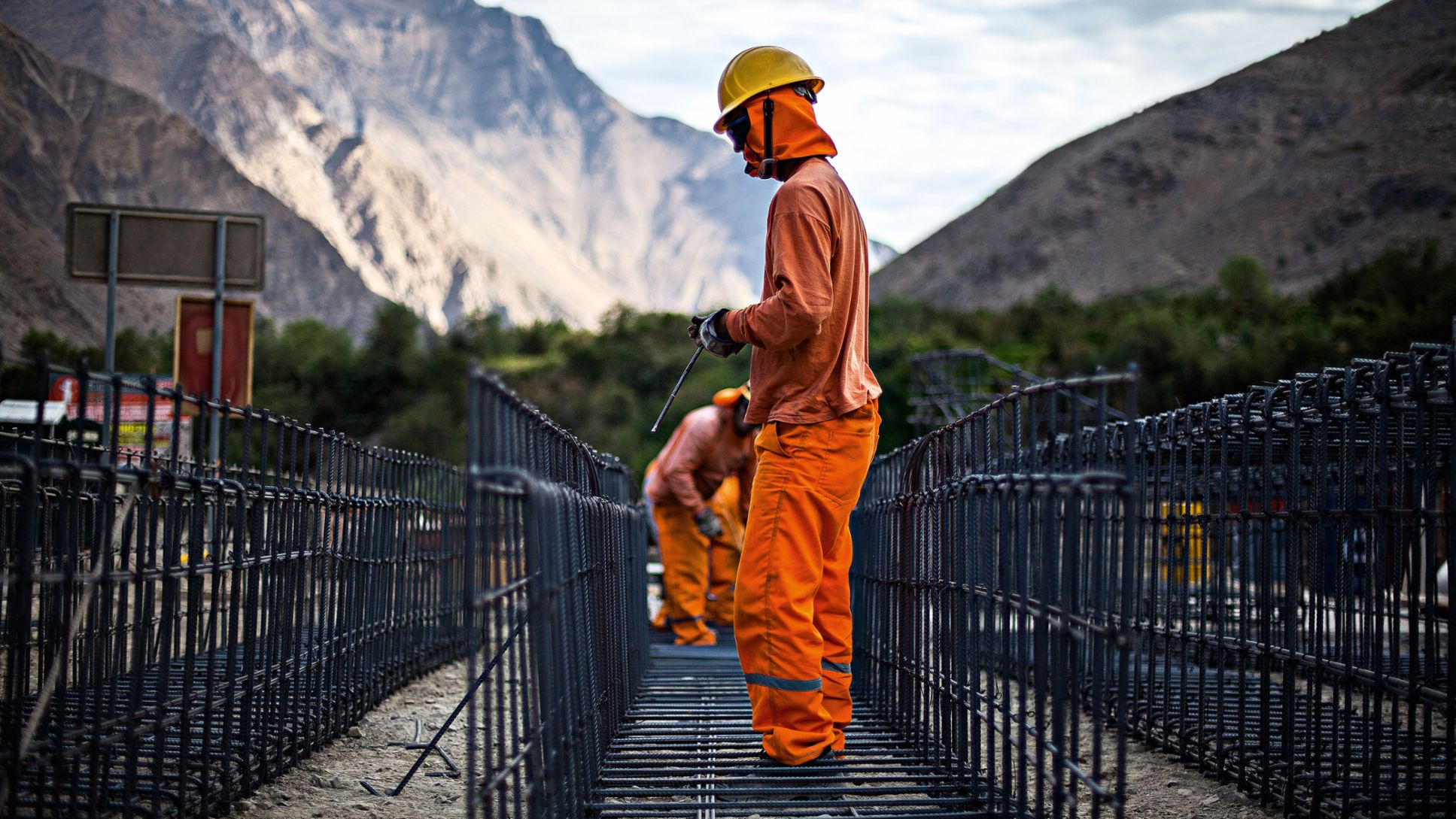 Building at the limit

The new PE-18 expressway is being built in the highlands of Peru. Under extreme conditions.

The surrounding terrain is carefully inspected and closed off before the explosion. Silence reigns for just a few seconds, and then the hundred-meter-high cliff wall begins to move. Accompanied by a deafening roar, tons of stone break loose to leave a huge breach in the face of the rock. Here, on the last segment of the new PE-18 expressway—a few kilometers from the small town of Churín in the Peruvian Andes—skilled workers secured by ropes have been climbing the nearly vertical cliffs for weeks to drill holes and fill them with explosives. All of this has been going on while the normal level of traffic continues on the road below. Building infrastructure in Peru is not a task for the faint of heart.

Feeder to the Pan-American Highway

The high-altitude project is going well, and site manager Elmir Dias is satisfied. “We’ll finish the second stage of construction on time,” he reports. Then it will be possible to travel one hundred kilometers by expressway from Churín, more than 2,000 meters above sea level, directly to the port city of Huacho on the Peruvian coast. There PE-18 will meet traffic coming from Ecuador in the north and Bolivia in the south, because that is where it joins the legendary Pan-American Highway.

A network of around 45,000 kilometers of expressways, the Pan-American Highway runs along the west of the Americas, from Alaska in the north to Tierra del Fuego in the south, traversing 14 countries in the process. PE-18 is one of many side arms of this vast network. It is a major infrastructure project of the Peruvian government. Upgrading what used to be a secondary road into an expressway will offer an alternative to the country’s greatly overtaxed west-east artery, the Carretera Central. “That used to be the only paved option from the rainforests of the interior to the capital city of Lima,” says Dias. “And it has lately been experiencing more than ten times the volume of traffic it was originally planned to handle.”

PE-18 will also play a key role in the region’s economic growth. “The road is enormously important for accessing the many mineral mines in this region,” explains Eric Villena, who oversees the PE-18 construction contract for the Peruvian Ministry of Transportation. “The farmers in the area are benefiting too,” he notes, “because they are now better connected to wholesalers.” Crops such as guavas, avocados, star fruit, mangoes, and charichuelos—a mangosteen fruit—are grown here. Moreover, Churín is now much more easily accessible to tourists, who are attracted by its hot and sulfurous medicinal springs. The Consorcio Vial Huaura (CVH), which consists of the Peruvian construction company JJC and its Brazilian counterpart Andrade Gutierrez, began work on the project in 2013. A country road already ran along part of the planned route. But only the first 44 kilometers from the coast into the interior were paved. And long segments consisted of just a single lane for both directions. “That was extremely dangerous,” says Azán Checa, a specialist in lean construction. “Especially when the large trucks that carry minerals met traffic going in the opposite direction. In some places the road was also very narrow, with steep slopes.” Moreover, avalanches and floods frequently inflicted heavy damage, and often made the road impassable.

The new expressway is therefore being given sophisticated floodwater protection via a system of adjacent drainage channels. The road runs along the Río Huaura, and part of the narrow surface between the riverbed and the mountains could only be widened by removing large parts of the rock on one side. In lowlying areas, water had to be diverted under the road in order not to cut off the supply to local farmers. Throughout the entire period of construction, all manner of vehicles from donkey carts to trucks had to use the existing road.

Taken together, these factors created extreme conditions for construction—not to mention strong winds of up to 50 kilometers an hour, powerful UV radiation from the sun, and a large temperature range of 10 to more than 30 degrees Celsius. At first the work proceeded haltingly. It quickly encountered delays and also exceeded its budget. An analysis by Porsche Consulting identified the weak spots. “The logistics were causing us enormous problems,” says Dias. “Sometimes it would take us four days to get construction material from the Lima region to where we needed it.” Some locations were so difficult to reach that donkeys had to carry tanks of diesel to the machinery. And if the supply of materials was interrupted, work often had to stop.

Moreover, the government was eager to recruit members of the local population to actually build the road. Training the inhabitants of an agricultural region to perform difficult and dangerous construction tasks presented an enormous challenge to the site manager. “We started with intensive safety training in order to protect them from falling rocks and other hazards,” says Dias. The workers then learned how to handle the heavy equipment correctly—and to work with a takt-based system. “In the beginning it was hard for a lot of the workers to understand that the goal of their training was to make their work easier, not more complicated,” says Dias.

And one of the biggest skeptics at the start of the lean construction project was Dias himself. “To be honest,” he says, “I was not very hopeful that the consultants could solve our problems.” However, together with Porsche Consulting the team developed and implemented a system that made efficient use of the machines, materials, and people. “I was convinced that we would have to double our workforce. But then I realized that our problem was not a matter of too few people but of how they were being deployed.”

The solution consisted of identifying repeated segments of work that could be tackled easily and with streamlined planning. Together with the consultants, the team subdivided the route into smaller segments, and then did detailed personnel planning to determine how many workers were needed for each job. The capacities of the work groups were precisely adjusted to meet the needs. For example, the number of workers required to build the drainage pipes and water channels on both sides of the road was increased by ten percent to 45—while the actual production rate for those jobs increased by 63 percent.

And instead of having the same type of work divided among multiple groups, each group specialized in certain tasks. This enabled different types of work to be done in parallel at the same place. After three months, productivity had increased by more than ten percent. That convinced the site manager. “There’s a culture of immediacy at construction sites,” Dias says. “You only keep a change in place if you can immediately see the results.” This in turn led to questioning other apparent certainties, such as the capacities of the dump trucks that carry construction materials from quarries to the site. “For a long time we used to have a philosophy of ‘more is better,’” Dias says. A line of trucks was considered a good sign, because that meant there wouldn’t be any shortages of material.

However, ever since the capacities of the excavators and the dump trucks have been coordinated, that philosophy no longer holds. “We don’t have any trucks standing around anymore and all of the construction machines are used to the optimum extent.” This brings the costs back down to where they should be. And Dias adds his own very personal comment on the gigantic project. “After more than 37 years of working in construction, I never thought I’d learn so many new things.”