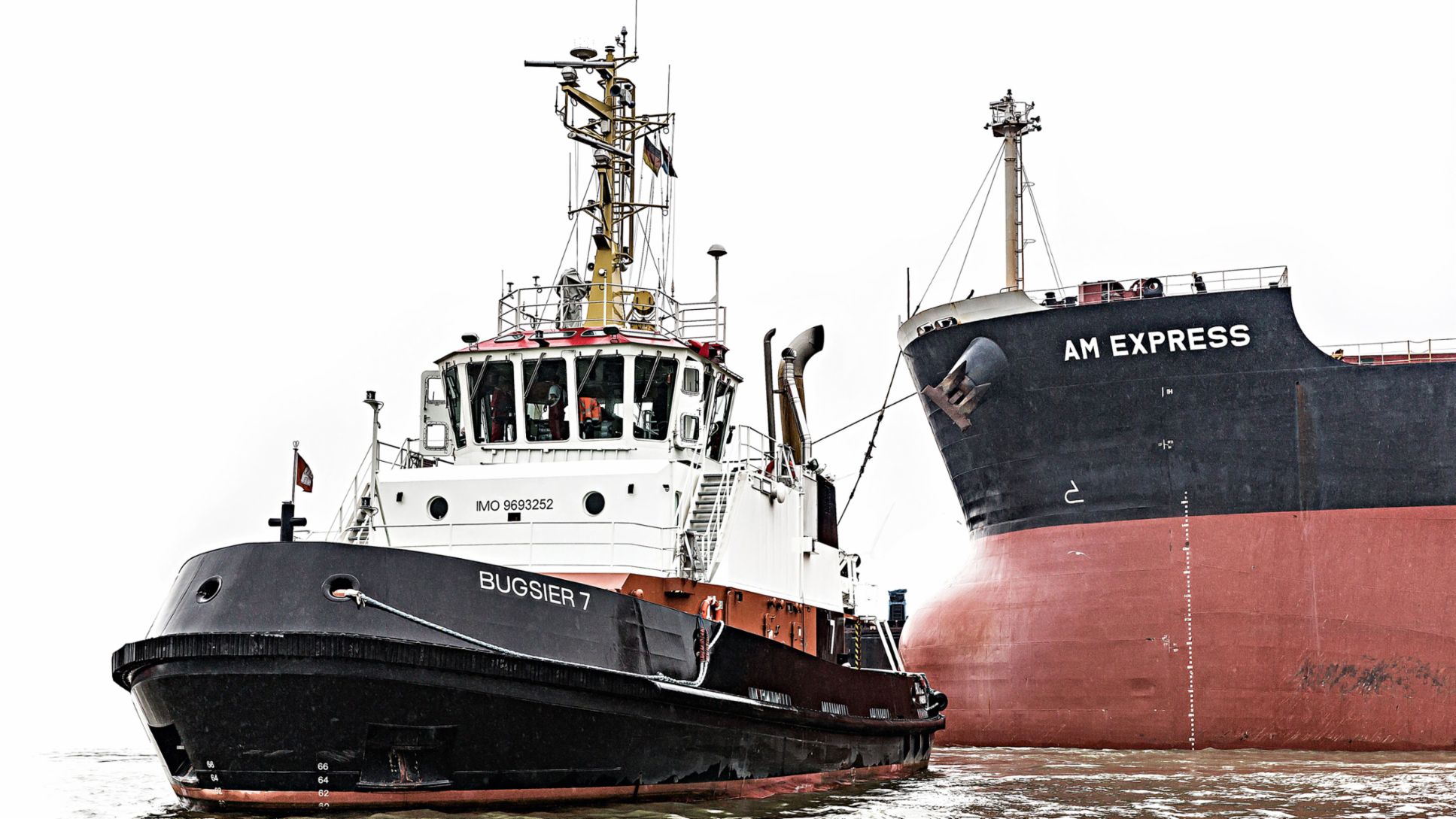 Oliver Kayser, who directs the Hamburg office of Porsche Consulting, spent a day on a tugboat in the city’s port. He wanted to know why state-of-the-art seagoing vessels cannot reach their berths in the harbor without outside assistance.

The warning packs a wallop: “If this cable breaks it becomes a deadly whip,” says Kai Hashagen, pointing to a steel hawser as thick as a man’s arm, which connects the enormous AM Express freighter to the comparatively diminutive Bugsier7 harbor tugboat. Captain Hashagen, whose crew breaks with nautical tradition to call him by his first name, commands the extremely agile and extraordinarily powerful tug. An experienced seaman, he sits in a swivel chair on the bridge, seemingly relaxed with a heavy mug of black coffee. But his apparent calm belies a keen sense of concentration.

The job on hand consists of bringing the 200-meter AM Express, which flies the flag of Hong Kong and can carry 27,000 tons of coal, from its berth in the Port of Hamburg to the Elbe River so it can head back out to the North Sea. The freighter’s hull extends nearly straight up from the water to a height of 30 meters. Waves break against its stern. The Bugsier 7 approaches to within a few centimeters, and then touches it. This is not a false move, but rather part of a precision process. Standing on the deck of the Bugsier 7, mechanic Frederick Wenning catches the throw line tossed down from the AM Express and connects it to the hawser. An electric winch starts unwinding the metal cable, which weighs tons. The cable is pulled up and onto the AM Express, where it is then secured. When Captain Hashagen receives the radio signal that it is in place, he gives the order to start towing. “You really need to have a good feel for this,” he mutters. Which he has. At any rate the cable has never broken on him. And that is a record he’s determined to keep.

With a second tugboat connected to the stern of the freighter, the three-member procession moves slowly along. This is a good moment for Sven Schröder to engage in a little promotion of the work on the tug. A member of the board of management of the company known as Bugsier-, Reederei- und Bergungs-Gesellschaft mbH & Co. KG, he explains that “this is an exciting line of work, which also offers a good balance.” The crew spends eight successive days and nights on board, ready to go into action at any time around the clock. When on the job, they share a home—in the middle of the city, yet also removed from it.

The largest freighters and cruise ships, which can extend 13.8 meters down under the surface of the water, have only a short window of time to maneuver in the Port of Hamburg. High and low tides vary the water level of the Elbe River by an average of 3.6 meters, so Hamburg has what is called a tidal port. Giant seagoing vessels can only enter the port at the high end of this fluctuation, or else they would run aground on the silt of the narrow riverbed. The water rises for around six hours, and then sinks to its low point again over the same period of time. About half of all assisted entries and exits are done at night, so it’s not unusual for various tugs to be docked at their berths during the day while their crew members sleep.

Captain Hashagen, whose red beard gives him the appearance of a real “sea dog,” sailed the world for many years with the Hapag-Lloyd shipping line. Sometimes he would go for weeks at a time without seeing land. Now he makes sure that the big merchant vessels and cruise liners can get in and out of the Port of Hamburg without incident. Covering 7,200 hectares, this world-class port accounts for one-tenth of the area of the Hanseatic city. It sends ships out to 950 other ports in 178 countries, and handles nine million containers a year.

Without the towing service, action at the port would probably come to a standstill. Like taxis, the tugs stand at the ready to meet merchant ships and cruise liners from around the globe at the border of the citystate of Hamburg, take them literally on the line, and lead them into the harbor basin. There the nimble tugs function like parking assist systems as they tow, pull, and brake the heavy vessels into the right berths. They even shove the ships by putting their prows up to the latter’s hulls and giving a push—bugsieren in German, hence the name of the company and of Hashagen’s boat.

The Bugsier 7 is one of the company’s newest vessels. It is what is known as a tractor tug, with a drive system in the prow. Two rudder propellers with a 360-degree range of motion give it superb maneuverability. They enable the tug to move at speeds of up to twelve knots and also turn on a dime. Two ABC (Anglo Belgian Corporation) diesel engines, with a combined output of 8,000 horsepower, give it the requisite amount of propulsive force: a bollard pull of 72 metric tons. “These types of engines are also used in generators and diesel locomotives,” says Schröder. He hopes that diesel locomotives will continue to have a future. “They help to improve the availability of replacement parts, which can be critical at times,” he notes.

Despite their very powerful drive systems, the enormous merchant vessels cannot maneuver in Hamburg’s tight harbor basin with the requisite precision on their own. So they have to rely on assistance from the tugs—and in fact are legally required to do so. Many shipping companies therefore sign general contracts. Prior to their vessel’s arrival, a harbor traffic controller notifies the relevant towing company.

Two hours back in time: the Bugsier control center receives a message that the AM Express bulk carrier is ready to be guided out of the harbor. Everything has to move quickly now. The crews of the Bugsier 7 and Bugsier 8 are notified and get ready for action. On board the Bugsier 7, First Technical Officer Neumann has just finished inspecting the engine room when he gets word by radio. Leaving the narrow berth is like maneuvering a car out of a tight parking place in the city. Captain Hashagen has to move laterally, which is called side stepping. His practiced hands manipulate two joysticks, each of which controls one of the two rudder propellers at the prow. With windows all around the bridge, he has superb visibility. “We’re heading to a departing vessel now, which we’ll guide out of the harbor to the Elbe,” he says as the job begins.

The AM Express bulk carrier left the Port of Luleå in Sweden 20 days ago with a full load of coal. Now it will be heading to its destination of Port-Cartier in Canada. “Weather conditions, currents, and loads can make an operation like this very risky,” remarks Hashagen. But today there are relatively “calm” conditions with winds of only 25 kilometers an hour. After a 20-minute drive with the freighter in tow, it’s time to “let go.” Deckhand Wenning starts up the winch again. Hashagen records in the log that everything went smoothly. And the crew is now on call for their next job.