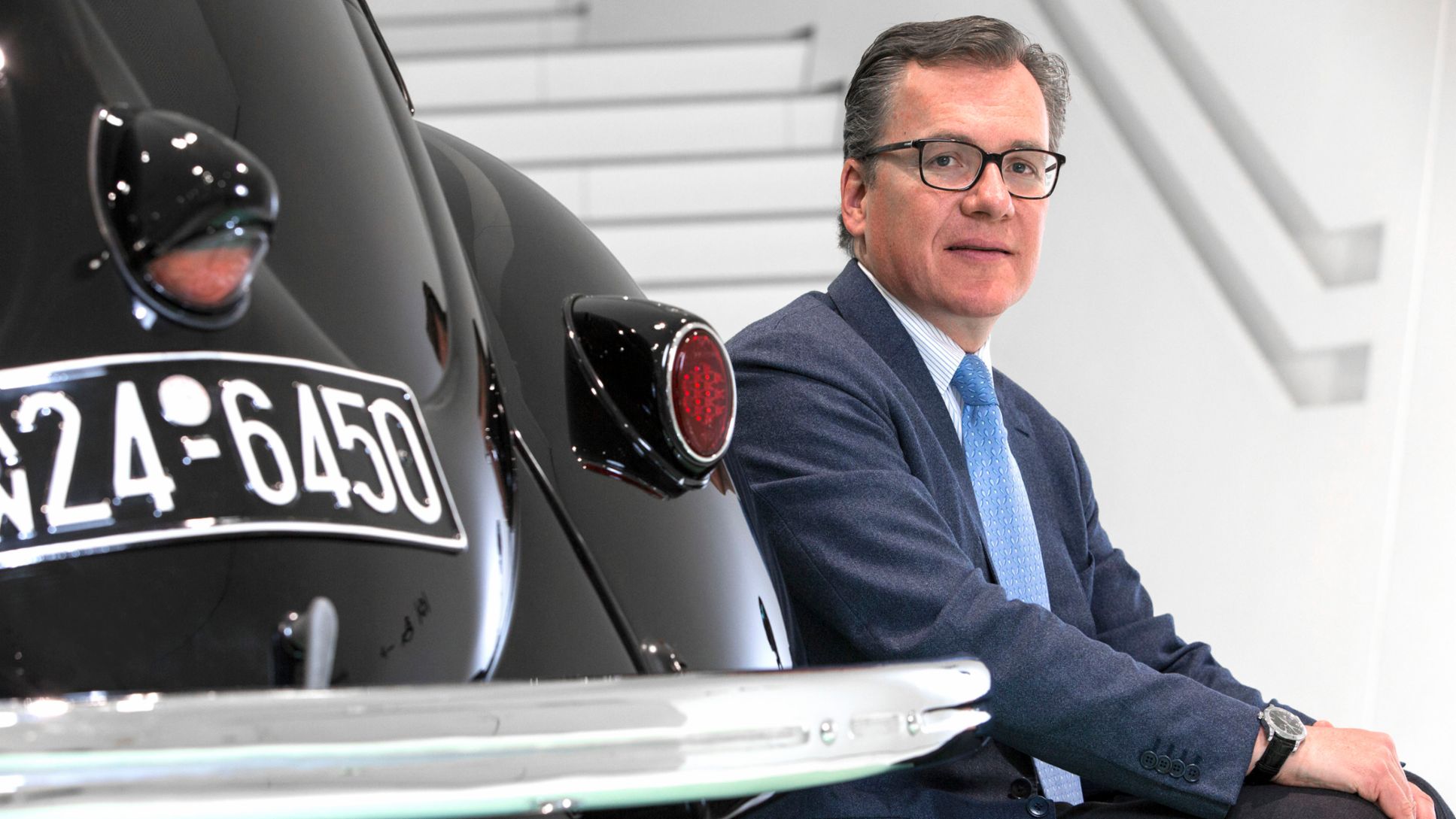 The father left Germany in the 1960s for Mexico, where he founded the Bocar company. Today the son successfully leads the automotive supplier. He is adhering to the standards of the founder and trusts in the support of Porsche Consulting.

Spanish or German? We leave the choice of language to the man from Mexico when we meet for a conversation at the Christophorus restaurant in Stuttgart’s Porsche Museum. “I’m happy to speak German,” he says. “I speak German with my parents and Spanish with my siblings. Although I grew up in Mexico, I often think in German— when I count, for instance.” Marcus Baur, CEO of Bocar, a group of Mexican companies in the automotive supply industry, commutes between worlds. In 1967 his father Friedrich (“Frederico”) Baur, who had emigrated to Mexico from the southern German city of Esslingen, founded the company to make carburetors and water pumps.

One of the first Bocar products was a carburetor for the “Mexico Beetle,” a version of the Volkswagen Type 1 that was made in Puebla by Volkswagen de México from 1967 to 2003. Today the Bocar Group makes high-grade precision components and complex aluminum and plastic assemblies for automotive applications at ten plants in Mexico. In addition to other casting processes, Bocar also specializes in die casting, which it uses to make products such as structural components for car bodies. It further processes these and many other different components on high-precision multi-axle CNC systems. Its customers include leading car makers such as Volkswagen, Audi, Daimler, BMW, Toyota, Nissan, Ford, Chrysler, and General Motors, as well as major suppliers such as Bosch, Continental, and Valeo.

Marcus Baur explains why the family-run company is so well established. “When the North American Free Trade Agreement (NAFTA ) went into effect in 1994 for the USA, Canada, and Mexico, only a few companies in Mexico were prepared for international competition in terms of their product quality and processing expertise. At the time, we benefited from our German influence, which also helped us to grow strongly over the next twenty years.” Bocar continues to model its entrepreneurial approach and actions on German examples. “Every one of our factories would be equally at home here in Zuffenhausen,” he remarks on gazing out the window at the buildings on the Porsche site.

German influence is part of this Mexican company’s success story. As a young man Marcus went to his father’s home town of Esslingen to study mechanical engineering. Now 48 years old, he says that “without having spent that time in Germany I probably would not be able to lead our company the way I do now. Some of our key suppliers are located in Germany, and we derive some of our processing expertise from lively exchanges with these companies.” Bocar has uncompromising standards of quality for the precision production of its aluminum and plastic components, because even tiny deviations from defined process parameters or in tool contours can lead to fatal errors such as air entry or surface irregularities. Bocar obtains most of the molds for its die casting, mold casting, and injection molding from specialists in Germany. “We also have German employees in technical areas, such as specialists in casting, processing, and assembly. With German expertise and Mexican dedication, we do production work on the highest international level here in Mexico.”

But Bocar not only draws its expertise from Germany. It also develops it within its own company. “We introduced a training program more than 40 years ago based on the German system,” Baur notes. Each factory has its own apprenticeship workshop, and 170 apprentices are currently being trained to become mechanics, tool makers, and casting technicians. Most of them remain at the company. In addition, since its inception the company has been marked by a trio of virtues typically considered German — cleanliness, order, and discipline — which are also anchored in the company philosophy. These three virtues are responsible for half the company’s success, according to Baur. As he puts it, “If you don’t have to spend time dealing with these things you can turn your attention to the really difficult tasks.”

Thus Bocar combines the best of two worlds. According to Baur, the value system of this Latin American country fits in well with that of the family-run company. “Our long-term employees see the company almost as part of their family, and are very loyal,” he says. That means a high level of responsibility from the company side as well. “We tend to be conservative when it comes to investments, for example, and place a premium on having a solid financial foundation. As an owner-run company, we can also take a more long-term view than many of our competitors.” That always pays off in the end.

“Trust is a very important factor”

Decisions based on long-term considerations require a special foundation, however. In contrast to Germany — where contracts are the measure of all things — in Mexico this position is held by trust. That applies also and especially to cooperation with the experts from Porsche Consulting, who put their first project with Bocar into practice ten years ago. “Trust is a very important factor,” says Baur. “The Porsche consultants earned the trust and acceptance of our employees. They continue to be external consultants, but people with an outside perspective can often see and achieve more than those inside. Yet at the same time they are completely accepted, which is a major element in success.”

The Porsche consultants have been active continuously since 2008 in a number of different areas of the company. This comprehensive level of cooperation has made it possible to have an unusually systematic effect on the company. Optimization has been implemented step by step “from the inside to the outside,” i.e. from the core — production — to other areas up to and including strategic decisions. A production system specially tailored for Bocar institutionalizes the company’s basic values today by means of concrete tools and processes. Uniform production processes at all of the automotive supply plants ensure maximum efficiency. Modern product management also relieves the load on the engineers and gives them the freedom to concentrate on the products, which are regularly checked and optimized in terms of cost.

Helping people to help themselves

In the meantime, the consultants have also turned their attention to support areas such as purchasing and sales. For its Strategy 2022, the company worked together with the Porsche consultants to specify three goals each in 2012 for the areas of customers, quality, and employees. “These long-term goals have remained the same, and each year we use them to derive around 15 specific projects that support short- as well as long-term goals,” says Baur. True to the principle of helping people to help themselves, Bocar has set up a project management office directed by its own employees that works constantly to achieve those strategic goals.

“The Porsche advisors have come to know our company so well that they can provide very extensive, nearly holistic, consulting,” says Baur. In particular, the company’s management team has developed over the years to internalize the approach of operational excellence. “We are a Mexican company, but we use German standards. Porsche Consulting is helping us to compete in this league.”

The average age of the population in Mexico is below 30, and many young people work at the Bocar factories. “The people here are very enthusiastic and show a high level of dedication,” says Oliver Kayser, a partner at Porsche Consulting who has worked with Bocar from the very start. This means that many things can be put into practice in faster and less complicated ways than elsewhere. Optimization measures are sometimes applied literally overnight. “One virtue that we’re still working on is sustainability,” says Baur. “Porsche Consulting does regular audits to ensure that we continue to advance instead of standing still or even regressing. This enables us to ensure our success over the long term.”

Mexico’s automobile market is expected to undergo above-average growth over the coming years. Marcus Baur is prepared for this and seeks to remain a step ahead of his competitors in the future as well. Over the medium term he is thinking of internationalizing Bocar’s production in order to build up a presence outside the NAFTA region. The first factory outside Mexico is expected to be opened within five years and to operate on the same principles as those in the home market.

German-Mexican success story will go on

The company will still maintain its connections to Germany, however. “Especially in product and processing expertise we will continue to watch Germany and develop additional resources at our administrative and development office near Stuttgart,” says Baur. This German-Mexican success story will go on — and on and on. Like the black Volkswagen Beetle that Baur discovers in the Museum’s exhibition. Bocar today can no longer be compared with the father’s company, which made carburetors.Yet it has remained true to its core.