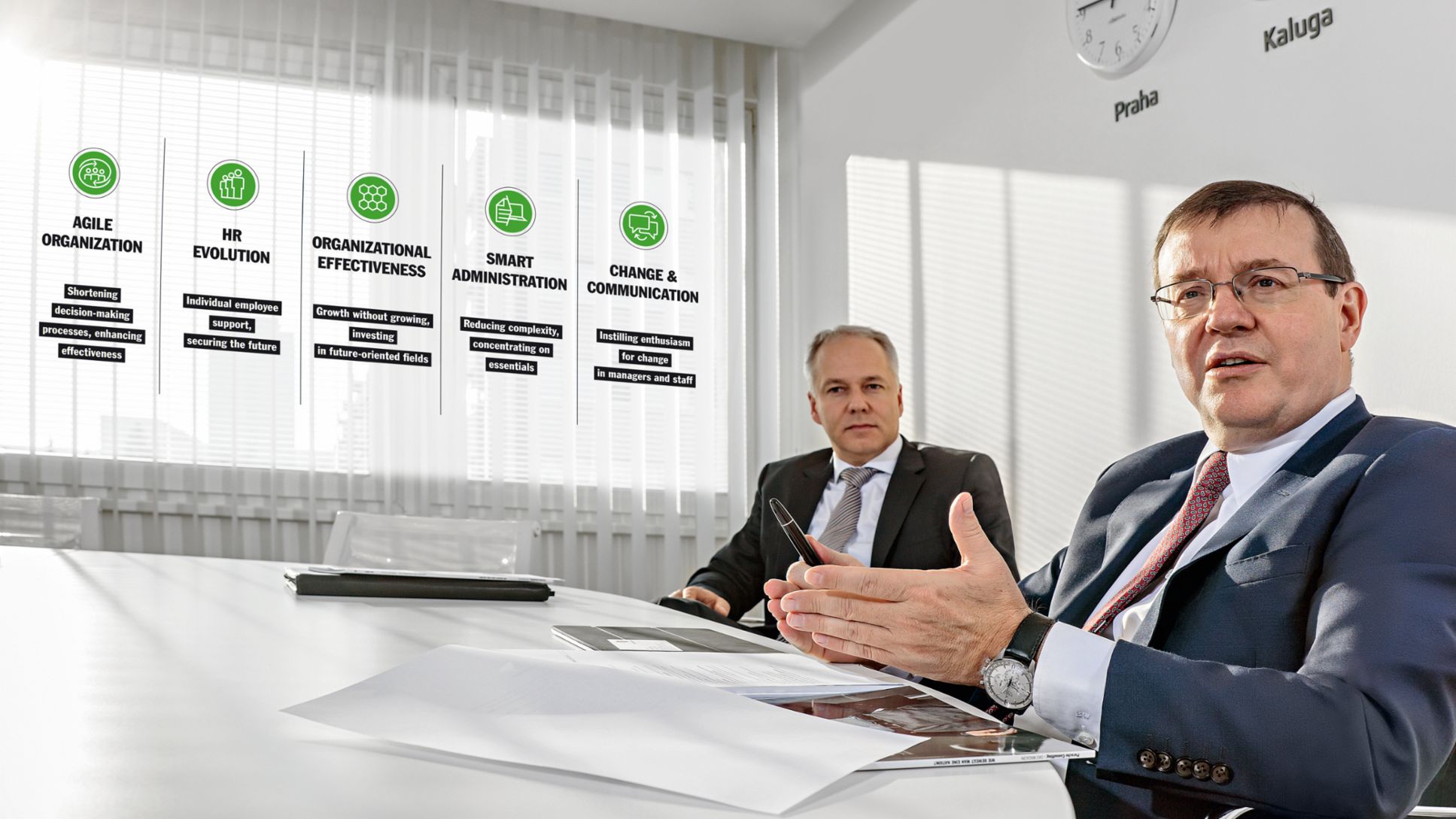 With the support of Porsche Consulting the ŠKODA car maker continuously shapes and polishes its high-performance organization—just like lending even more brilliance to a diamond.

It’s a sunny winter day in Mladá Boleslav. The town, which has around 44,000 residents and its own leaning tower called the Putna, is located around 60 kilometers northeast of the Czech capital city of Prague. It is home to the headquarters of ŠKODA Auto. With a 120-year history, the company is one of the oldest car makers in the world. And it has become a real model for companies in Europe. The results are there for all to see: in 2015 it delivered more than a million cars in around 100 markets—twice as many as it did a decade earlier. “We are proud of the example we are setting for the Czech Republic,” says Bohdan Wojnar, the member of the Board of Management in charge of human resources. “And we want to continue doing so. We also have to keep up a reasonable pace. ŠKODA must never turn into a slow-moving tanker.” Czech native Wojnar emphasizes his point by citing the words of President John F. Kennedy: “The time to repair the roof is when the sun is shining.”

The future will bring major challenges for the automotive industry. Strict regulations, digitization, connected cars, e-mobility, self-driving vehicles—the list of large, complex projects goes on and on. They require companies to give their all, not only in production but also and especially outside it. ŠKODA is therefore examining all of its indirect areas of activity, with the aims of developing a high-performance organization and freeing up resources for future-oriented projects. With the support of Porsche Consulting, the company is putting the five different modules of its High Performance Organization (HPO) project into practice: Agile Organization, HR Evolution, Organizational Effectiveness, Smart Administration, and Change Management and Communication. Porsche Consulting Magazine presents excerpts from these modules, which are ensuring ŠKODA’s viability for the future:

“This module is designed to adapt our organization and prepare its processes for the challenges of the future,” says Chief Information Officer Andre Wehner, who is directing the HPO project together with Bohdan Wojnar. The ŠKODA organization used to have a relatively large number of managerial levels—as many as seven in some parts of the company. It also had quite a high ratio of managers to staff, with an average of 1: 4.8. “Within just six months, one level of management was completely eliminated and another was reduced by a third,” reports Marc Zacherl, a partner at Porsche Consulting.

All departments now show a maximum manager to employee ratio of 1:8. “Our employees often had to spend long periods waiting for information and decisions. We have now become considerably quicker in this regard,” notes Wojnar, adding that “our employees remark on this, and are very satisfied.” Some of them were understandably concerned at first. But the executives put a lot of effort into assuaging their fears. “They need a clear set of objectives that are communicated to all managers and staff,” says Wehner in describing the process. “You can also get people on board by presenting concrete solutions. The managers did not have to leave the company. Instead there were a number of department heads who were not comfortable in their roles. But they were very valuable technical specialists whom we urgently needed in other positions in the company, and whom we can now promote on an individual basis via the creation of new career paths.”

Like at many other car companies, there used to be only a single managerial path at ŠKODA. As part of the HPO project, two additional career paths of equal value were created. Employees can now embark upon not only a technical but also a project career path. ŠKODA has set an example for the industry with this model—especially in light of the rising importance of project management. “Let’s take the example of connected cars, which you cannot advance in isolation. All of the company divisions have to be involved, including technical development, IT, production, sales, finance, controlling, and so on. For matters of this type we need people with strong project management skills and customer knowledge,” explains Wehner.

The new job rotation principle is also adding fresh impetus to the company. It calls for employees to take a new position after seven years at the most, in order to promote their individual development but also to prevent the formation of “knowledge silos” and to widen views of the company as a whole. “Of course you have to keep things in perspective here, meaning you shouldn’t take a rigid mathematical approach to the rotation,” says Wojnar, who as the head of HR is a great advocate of this principle. “I myself come from a technical background and later became a director of controlling. I then made a lateral move to HR. These changes in perspective have been very valuable.” Job rotation is a win-win situation for everyone involved. Among other things, it reduces the risk that employees face if they hold a single position for a long period of time—a fact that many do not realize at first.

ŠKODA is also benefiting from a new performance management system for its HR work. It is increasing transparency and constructive feedback in performance reviews. “High manager to employee ratios tend to produce excessively positive employee evaluations,” observes Wojnar. So in all of the company divisions, performance reviews are now compared within the teams in order to identify top achievers, for example. A clear basis for comparison strengthens the focus on performance and especially encourages a strong culture of feedback as well as individual support for employees.

“Our value chain is changing,” says Wojnar. “What worked 30 years ago will not necessarily be effective today.” He cites an example from the 1950s when ŠKODA started making its car bodies out of metal instead of wood. In one fell swoop, highly regarded coach-making skills and carpentry expertise lost their value. “We had to convince people back then to make the necessary adjustments. In today’s fast-moving world, this is more important than ever.” So ŠKODA continuously monitors the strategic significance of each activity for the company’s core area of business. As Wehner adds, “The companies that can put the best products and solutions on the market the fastest are the ones who will win out. So we keep asking ourselves questions like ‘What are our core areas of expertise?’ or ‘What do we implement the fastest?’ or ‘In what areas are our partners faster?’”

“As part of this project, we analyzed all of the indirect areas and their approximately 10,000 positions to identify the core and non-core skills,” says Oliver Bibo, who is responsible for the project on the Porsche Consulting side. “When we started putting the measures that we had defined into practice, we involved the employees on a bottom-up basis, in contrast to our previous ‘top-down’ approach.” ŠKODA has since outsourced additional activities to external providers. The company is putting all the resources thereby gained into strategic future-oriented fields such as connected cars and connectivity. “We are concentrating on individual solutions for our employees,” says Wojnar. “And we are happy to take the extra time to do so.” Examining core areas of expertise will remain an ongoing task. “We don’t live from tradition alone,” he says. “The technologies keep developing further. You have to keep having these discussions every day.”

It’s entirely natural that some processes that made sense years ago live on when they are no longer efficient. ŠKODA has focused intensively on cutting bureaucracy. It has simplified numerous authorization processes, for example by eliminating the applications for domestic business trips. For IT requests it has reduced the number of standard processes from eleven to two. An analysis also revealed that ŠKODA employees were spending a great amount of time on committees, in meetings, and writing reports. So the frequency and duration of meetings were reduced, superfluous reports were eliminated, and important reports were streamlined. “Altogether this freed up twelve full-time positions,” says Dr. Matthias Tewes, a partner at Porsche Consulting. Smart IT solutions are generating additional resources. These include introducing electronic drivers’ logs and expanding an online portal to replace paper applications for authorizations. Digitizing travel expense forms also saves ŠKODA some 3,600 hours a year. “We launched these matters top-down but also encouraged employees to contribute their own ideas, which has promoted a healthy culture of improvement,” reports Wehner.

ŠKODA has also developed innovative types of cooperative work in what are known as “project houses.” “We want a modern atmosphere with an open culture, direct communication, and prompt decisions,” says the company’s CIO. There are currently two project houses at work on different product innovations, with plans for more.

Change Management and Communication: Instilling enthusiasm for change in managers and staff

Employee surveys known as “pulse checks” enable ŠKODA to keep a constant eye on the acceptance and progress of its change project. The level of acceptance has increased continuously over time. But how has the company succeeded in gaining the support of around 10,000 employees for its new direction? “Our intensive and far-reaching internal communications campaign played a crucial role,” says Wehner. It was anchored not only centrally in corporate communications, but also decentrally in close cooperation with management personnel. Change projects generally run through different phases, and their beginnings are often marked by critical questioning. The more advocates can be gained at an early point in time, the faster the level of acceptance will rise. “We had people tell their own stories in our internal communications media, and explain how the changes had improved their lives at work. And that triggered an avalanche—in the best sense of the word,” says Wojnar. Another key to success lay in the diverse range of informational channels. The project was and remains on the agenda of print and online media, individual talks, management conferences, and employee events.

“The High Performance Organization is an ongoing project for us and we continue to devote full attention to it,” says Wojnar. “A diamond can always be polished further in order to shine more brightly. Projects like this one with Porsche Consulting are helping us to strengthen the ŠKODA brand all the more. We have not only a rich tradition but also a brilliant future.”