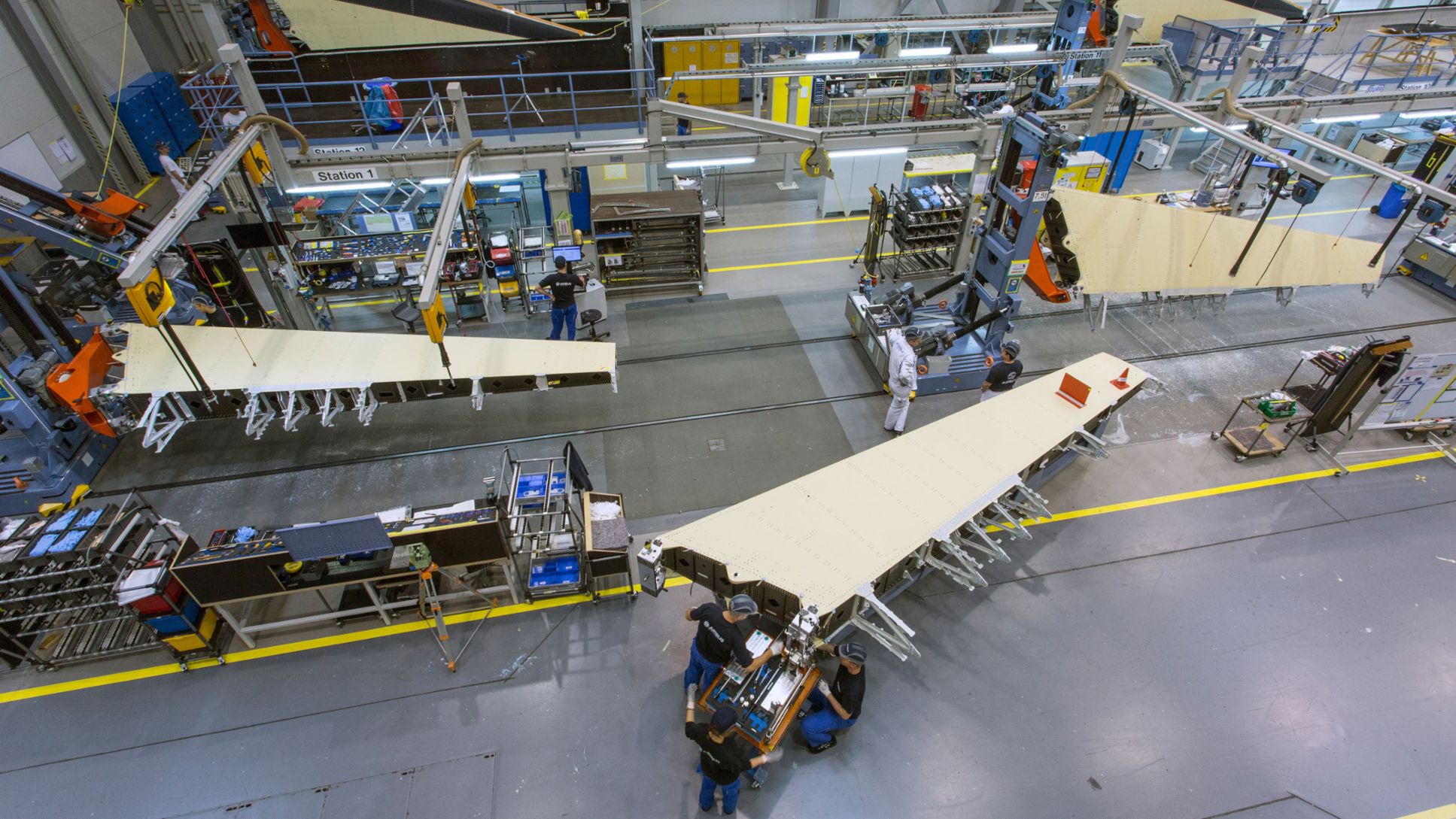 Taking off in a new direction

A plant in the northern German town of Stade makes vertical tail planes for the Airbus fleet. Its production processes are breaking new ground – and setting an example for the European aircraft market.

Vertical tail planes consist primarily of ultra-lightweight carbon, are full of technical systems, and can be up to 14 meters high. These characteristic “fins” at the rear of the fuselage give airplanes directional stability and also provide a highly visible location for airline logos. Known as VTPs for short, these components require a high degree of perfection and are crucial for prestige. Every single VTP for Airbus comes from Stade, a town of 46,000 near Hamburg. The plant’s 2,200 employees have quite a history of VTP production. The global fleet of Airbus A320 medium-haul jets alone—the best-selling airplane in the world—consists of more than 6,000 aircraft.

“In recent years we started running up against capacity limits in production,” says Jens Walla, who was the plant director in charge of converting VTP production from a workshop to a flow model. No further increases in unit numbers were possible, especially for the smaller aircraft with a single aisle between the seats. Until recently, Stade was producing 40 VTPs a month for these single-aisle aircraft. While that may sound like a lot, it was not enough to meet the enormous demand. “Airbus has 4,000 orders for commercial airliners on its books for the coming years,” says Walla. “There was no way we could have increased production sufficiently with the workshop method,” adds Matthias Havekost, the director of assembly for single-aisle VTPs.

Three shifts were producing two of the six-meter components every day, and exhausting both the personnel capacities and the production space. Installing hydraulic and electronic components in the midsections of the carbon-fiber composite fins was performed on multi-story scaffolding. The VPTs stood straight up, and the workers moved around them on fourstory towers. A crane was used to mount the rudders. “That whole approach required long pathways, and the constant need to climb stairs created a lot of ergonomic stress for the workers,” says Mona Lippmann, the project director in charge of introducing a takt-based flow line – which is now the production method used in Stade.

Skepticism about the automotive industry

The vision for change was born in 2011 during a visit to the Porsche plant in Leipzig. “On seeing how Porsche produces its cars, we asked ourselves why we couldn’t make our vertical tail planes in just the same way,” says Havekost. “That very day we did an initial drawing of what a flow line could look like at our plant. And that’s what we ended up putting into practice.” The plant director at the time, Jens Walla, was breaking new ground. As he explains, “In aviation, people view processes from the automotive industry with a fair amount of skepticism. For one thing, we have much lower unit numbers; for another, our dimensions are completely different.”

However, instead of simply lengthening its production hall in Stade, Airbus did in fact opt for a completely new assembly process. Before the switch could be made, however, the VTPs first had to be laid flat. “After running numerous tests, our engineers all came to the conclusion that we could build and also test them reliably in a horizontal position,“ says Lippmann. Only then could the design of the new assembly line be finalized.

In order to make these components actually “flow,” special movable carriers were designed to accommodate their enormous dimensions. These carriers transport the VTPs to the next stations on a takt-based principle. The assembly workers also had a hand in designing them. “The technical expertise of the workers was a key factor in developing the process,” says Lippmann. Of special note is that vertical tail planes have to meet the highest safety standards, which means their production is anything but trivial. So the flow production plan which included not only the assembly process itself but also the preceding logistics – was developed together with the employees at workshops organized by Porsche Consulting. Today the VTPs flow through twelve takt stations. They spend less than six hours at each station before moving on.

The new process also made it necessary to reorganize the work itself. After all, a takt-based system can only succeed if each station is occupied by an individual with the requisite expertise. The workers helped to develop a new shift model. And they now appreciate the higher degree of transparency. “Everyone knows who should be doing what, and when,” says Lippmann. “That fosters reliability and also ensures a greater degree of fairness in how the work is distributed.” And the system is a success. “With a two-shift model, we are 20 percent more productive than before,” says Havekost. He smiles when adding that there’s still room for improvement – because he’s expecting even more aircraft to be built in the future. “At full capacity we will be able to make 50 percent more VTPs on the same surface area than we could with the old system.” And whereas overtime used to be a matter of course, the workers currently only put in about one hour of overtime per VTP.

The flow production system in Stade sets a benchmark

“That’s just half of one percent, given that it takes 200 hours to make a VTP,” observes Havekost. In his view, the real success consists of meeting the delivery deadlines – at a previously unheard-of rate. “Stade now delivers one hundred percent of its VTPs on time. We couldn’t have imagined this outcome before,” he remarks. “But it was a long and arduous path to get there,” notes Lippmann. The main difficulty in the conversion process was the task of setting up the new line while the old system was still running. Moreover, production could not stop for a single day. How did they do it? Lippmann describes the approach they used: “We first had to build up a surplus in some areas. Then we started by setting up four stations as a mini-flow line and running these in parallel to the old line. Once the takt-based stations were stable, we could start dismantling the old line. And so we replaced the old system piece by piece.”

“The flow production system in Stade sets a benchmark for the entire Airbus Group. And we’re already working on applying it to other areas,” says Havekost. In addition to installing the components in the VTPs, the preceding structural assembly process will also soon be done on a flow system. This is where the mid-section of the VTP, which is essentially its “scaffolding,” is built from carbon elements. Here, too, Airbus will be drawing on Porsche Consulting’s experience. “It was clear from the very start that we would be acquiring this know-how from the Porsche consultants in order to use it ourselves,” says Havekost. The new plant director, Kai Arndt, wants to follow this path further. In his view, the plant is right on track to set an example for the aviation industry. “Stade has demonstrated that standardization and flow production also make sense for aircraft. The personnel here are very excited about pursuing this process further,” he says. And there’s no trace of skepticism anymore about methods from the automotive industry.