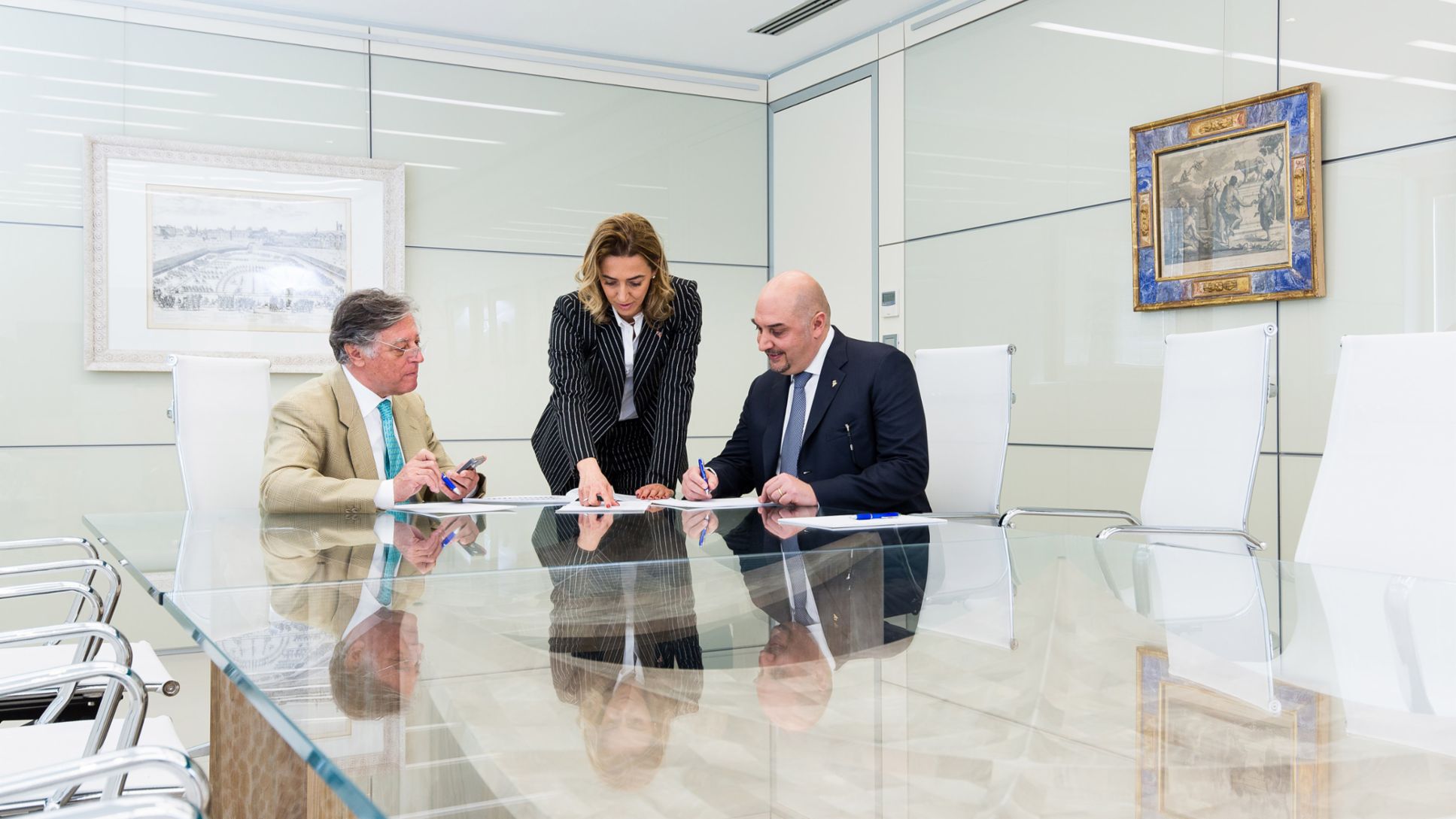 This family is all about packaging. The father launched a breakthrough with the “Robopac” back in 1984. And now the daughter and son have been taking the world by storm. For focusing on growth, Aetna Group brought Porsche Consulting on board.

Fortune favors the bold, as the saying goes. For the Aureli family, that means making the right decision at the right time – and thereby emerging from a crisis as a winner. In the 1980s, Alfredo Aureli – who had succeeded his father as head of the SCM Group, a leading company in the woodworking industry with 3,600 employees – wanted to reduce his entrepreneurial risk. Acting on an innovative idea, he created a new company in the  ackaging industry.

His starting point was the development of a battery-propelled robot that could encircle pallets of any size to wrap the contents in stretch film. He invented this device in a place where innovative ideas practically hang from the trees. Industry insiders worldwide refer to the area between Bologna and Rimini simply as “Packaging Valley.” More than 170 companies from the packaging industry have settled here, and post around six billion euros in sales a year. Twenty-seven percent of all the packaging machines worldwide come from Emilia-Romagna. In short, the heart of Europe’s packaging industry beats in Italy. All the more so in Villa Verucchio, a picturesque small town less than an hour from the beaches of Rimini. Everyone here knows the Aurelis, ever since Alfredo’s father founded the SCM company in 1932.

In 2008 the Aetna Group brought Porsche Consulting on board

With the farsightedness and determination that he continues to display to this day, Alfredo Aureli patented his “Robot” worldwide and used the mobile machine to develop a fully automatic version that can be installed as the last step of a production line. It is produced by the Robopac Sistemi company founded in 1987, which along with Robopac is now part of the Aetna Group. Today, the Group also includes the Dimac (since 1989) and Prasmatic (since 2010) companies. Both companies have been producing automatic packaging systems for over 30 years, primarily for the beverage and food industries. President Aureli’s daughter Valentina and son Enrico joined the Group’s management board in 2000 and 2001. Since 2005 they have led the Aetna Group S.p.A. in the capacity of managing directors, guiding the company’s strategic alignment.

One thing is clear: the two siblings who manage the company have inherited their father’s sense of family, combined with a will to succeed and the ideas needed to do so. As Valentina describes it, “Right from the beginning, the two of us shared an uncompromising interest in promoting the good of the company.” Their first priority consisted of improving both the quality and the operations, and their second focused on growth. That is why the Aetna Group brought Porsche Consulting on board in 2008. The key impetus for this move came from a talk at a Milan university by Federico Magno, who at the time was the managing director of the Porsche Consulting office in Italy. “Simply put, his presentation was completely different from anything we had heard from other consulting companies,” says Enrico. “What he said was clearly derived from practical experience gained by the company that serves as an example – Porsche.”

The lighthouse project for the company’s initial work with Porsche Consulting had a classic focus: lean production. The various Robopac semi-automated systems were being made on an island-type assembly system with different time periods such that throughput times differed and flow-type production was impossible. Working together, the employees, managers, and consultants designed an assembly line with defined takt times and harmonized work processes. This not only raised productivity but also optimized the work stations, which meant better ergonomic conditions for the employees and thereby also an improvement in product quality. Valentina is particularly impressed by the fact that the Porsche consultants “showed us where our strengths lie, which helped us to restructure the system and motivate our employees.”

The economic and financial crisis: fortune favors the bold

The timing for the initial success could not have been better. The economic and financial crisis in Europe in 2008 also hit the Italian packaging industry hard. With an improved level of competitiveness – fortune’s reward for its boldness – the Aetna Group was better prepared for the situation than other companies. “We had more confidence in what we could do and in our ability to succeed,” says Valentina. Step by step and with the help of Porsche Consulting, the family optimized the most important company divisions over the following years. The restructuring of one factory, for example, not only increased its productivity but also cut the amount of space it needed by about a third.

“We are focusing on two main goals for the future,” Valentina comments. “We want to offer even better service and achieve even stronger growth” – with Porsche Consulting as a partner. She adds, “We had a rough idea of where we wanted to go before, but we didn’t have a structure or a roadmap for the steps needed to get us there.” To increase customer satisfaction, the first step consisted of optimizing the amount of time needed to make offers and process orders. “At Robopac we were averaging six to eight weeks from receiving an order to delivering the machine. Now we’re at four weeks,” says Enrico. “And our delivery reliability is nearly 100 percent.”

Optimizing service and having a strategy for growth are two sides of the same coin for the Aetna Group. “To increase customer proximity,” says Enrico, “we want to have production sites in all the major markets.” Given the competition from China and the USA, the Aetna Group has to grow if it wants to consolidate its position over the long term. It has therefore set itself the target of increasing sales by 30 percent a year, half coming from internal growth and half from acquisitions. As partners, the Porsche consultants helped the company to develop a strategy based on the example set by Porsche. This was used to define the requirements, the core areas, and 60 strategic projects. That includes majority ownership of packaging companies in Spain and Brazil, for example, as well as plans for acquisitions in the USA. “We want to double the size of our company by 2018,” says Valentina. With 470 employees, the Aetna Group is currently posting sales of around 105 million euros a year. Since its founding, it has delivered more than 110,000 packaging machines in 120 countries around the world.

To achieve its ambitious aims, the Aetna Group is relying above all on its innovative power. Twenty percent of its employees are active in research and development, and the company owns 98 active patents. With new and future-oriented innovations, it wants to continue being a significant force behind technical progress in the industry and to attract customers with the increasing profitability of its products. In so doing, it is placing a premium on preserving the environment. Future machines are expected to use less packaging material, to operate more economically as a result, and to make it easier for the materials to be disposed of once the goods arrive. As Enrico sums it up, “In the future, our machines are no longer to be the last step in our customers’ production halls, but rather the first and most important step in their logistics.”