The history of the Porsche engineering office

The Porsche sports car brand began in 1948 when the first vehicle to carry the Porsche name was built. However, the history of the company goes further back.

Ferdinand Porsche founded his engineering office in 1931. Working until his death in 1951, the exceptionally creative technician, formerly a designer of electric cars and racing cars and the chief developer at Daimler-Benz, laid the foundations for the global company that would later bear the same name. Today, in September 2017, the founding, philosophy and development of Porsche’s predecessor company has been documented in great detail in the book “Porsche: Vom Konstruktionsbüro zur Weltmarke” (“Porsche: From Engineering office to Global Brand”) from publisher Siedler Verlag. The renowned historian Wolfram Pyta tells the story of Porsche GmbH/KG in its turbulent early years: from the origins of the Volkswagen to the transition to a wartime economy under National Socialism and the development of battle tanks, right up to the establishment of the automotive brand carrying the Porsche name. The book outlines the direction in which the creative dynamics of Porsche's founding years under National Socialism led the company, why the company had to undergo a fresh start after the war without its founder and how the global company ultimately emerged from the engineering office of old.

The book devotes particular attention to studying the role of Professor Ferdinand Porsche under National Socialism. The success story of Porsche’s engineering office is closely linked to the “Third Reich” and Adolf Hitler himself. Prestigious projects such as the Auto Union racing cars and the Volkswagen are synonymous with National Socialism. The Second World War even saw the development of military vehicles based on the Volkswagen, then known as the “Strength Through Joy” car. Like most German companies during the Second World War, Dr. Ing. h.c. F. Porsche KG, as it was then known, exploited a labour force made up of foreign workers forced into service.

The scholar describes Porsche as a prime example of a family business owner, a man who took advantage of the political relationships and opportunities that the Nazi regime offered–not out of ideological conviction, but out of pure economic interest–in order to assert his position as a developer and manufacturer in the face of the superiority of established automotive giants such as Daimler or Auto Union.

By painting this picture of the business owner, Pyta thus confirms the long-standing belief that Ferdinand Porsche’s first and foremost concern was safeguarding the ownership structure of his family business and protecting its resources. According to Pyta, Porsche benefited significantly from his access to political decision-makers without embracing the ideology of National Socialism.

The study offers new findings regarding the classification of Porsche GmbH/KG in its role as a engineering office during the Second World War. Porsche KG employed more than 400 forced labourers; however, the company was more lenient in the treatment of its workforce than the Volkswagen plant, for example. The book also reveals new details surrounding the origins of the Porsche plant in Zuffenhausen.

Light has now also been shed on the circumstances of Ferdinand Porsche’s captivity in France after the war. Contrary to popular opinion, Porsche was not convicted as a war criminal – the reasons for his imprisonment actually had a clear economic basis. Renault and Peugeot argued over Porsche’s role in the possible development of their own “Volkswagen”, which means that Porsche's imprisonment can be traced back to an internal conflict within France. It was not until July 1947 that Porsche was released from custody on bail. He was formally acquitted in May 1948.

Since September, a commemorative plaque for the forced workers employed by Porsche has been hanging in front of the historic plant 1 in Zuffenhausen. The bronze plaque was designed by artist Ubbo Enninga.

In his absence, his children Ferry Porsche and Louise Piëch took over the management of the company. This arrangement of succession within the family prevented any disputes relating to the transfer of management. With its transformation into an automobile manufacturer and the founding of the Porsche brand, the company completed its growth strategy launched in 1931.

Today, Porsche AG acknowledges the past of its predecessor companies and considers confronting its history as an ongoing duty. In 1999, the company joined the German Industry Foundation Initiative and donated five million Deutsche Marks to help establish a reparations fund for the victims of forced labour. In addition, seven people who were affected were each compensated with one-off payments of 10,000 Deutsche Marks.

Against this backdrop, the company subsequently began carrying out intensive research in the Porsche Archive as well as in external sources. This research was conducted by Porsche in partnership with Prof. Dr Wolfram Pyta. Pyta is Chair for Modern History at the University of Stuttgart’s Institute of History and is also Director of the Ludwigsburg Research Centre for the Study of National-Socialist Criminal History. He ranks among Germany's most renowned historians, with the Weimar Republic being one of his specialisms alongside other areas. In 2008, Pyta was awarded the State Research Prize of Baden-Württemberg for his biography of Paul von Hindenburg. It was on his suggestion that Porsche launched a fundamental research project in 2014 on the history of the Porsche engineering office. The research project, which was financially supported by Porsche, was carried out independently by Pyta and his team of two researchers (Dr Nils Havemann and Dr Jutta Braun) in an open and unbiased manner. The scholars were able to access all documents in the company archive. In addition, the team carried out research in a number of external archives, both public and private, in Germany, Austria, Italy, France and Russia. The researchers made a conscious decision to examine the period from the founding of the engineering office in 1931 until Ferdinand Porsche’s death in 1951.

The research project is the logical continuation of internal investigations into the company’s history and serves as an example of the company’s desire to fully and unreservedly shed light on the time period from the founding of the engineering office until after the Second World War.

Study as a prelude to further projects

The findings of the academic study gave cause for Porsche AG to undertake a number of follow-up actions. For example, a commemorative plaque designed by the artist Ubbo Enninga was installed at the entrance to the tradition-steeped plant 1, now the head office of Porsche AG. In addition, the research findings have been integrated into the permanent exhibition at the Porsche Museum. Similarly, the contents of the study have been incorporated into the training and development of all Porsche employees.

Porsche also instigated an academic symposium on “Perspektiven moderner Unternehmensgeschichte” (“Perspectives on contemporary company history”) at the University of Stuttgart in October 2017.

Furthermore, Porsche will sponsor the first Chair for research into company history in Germany at the University of Stuttgart.

Porsche’s history forms a part of its identity – even the period under National Socialism. Today, Porsche AG is committed to setting a clear example of tolerance and openness. Funding academic research into the company’s history will help Porsche to understand its past and therefore shape its future. 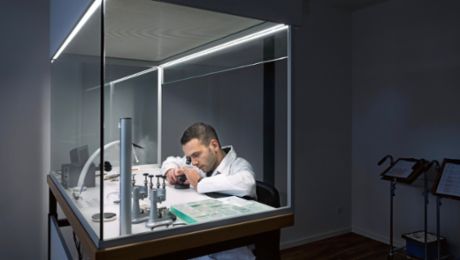 What do a watch and sports car engineering have in common? The answer. 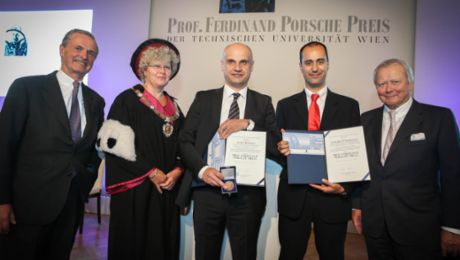 This year's prize goes to Luigi Ronco and Federico Sabbion.