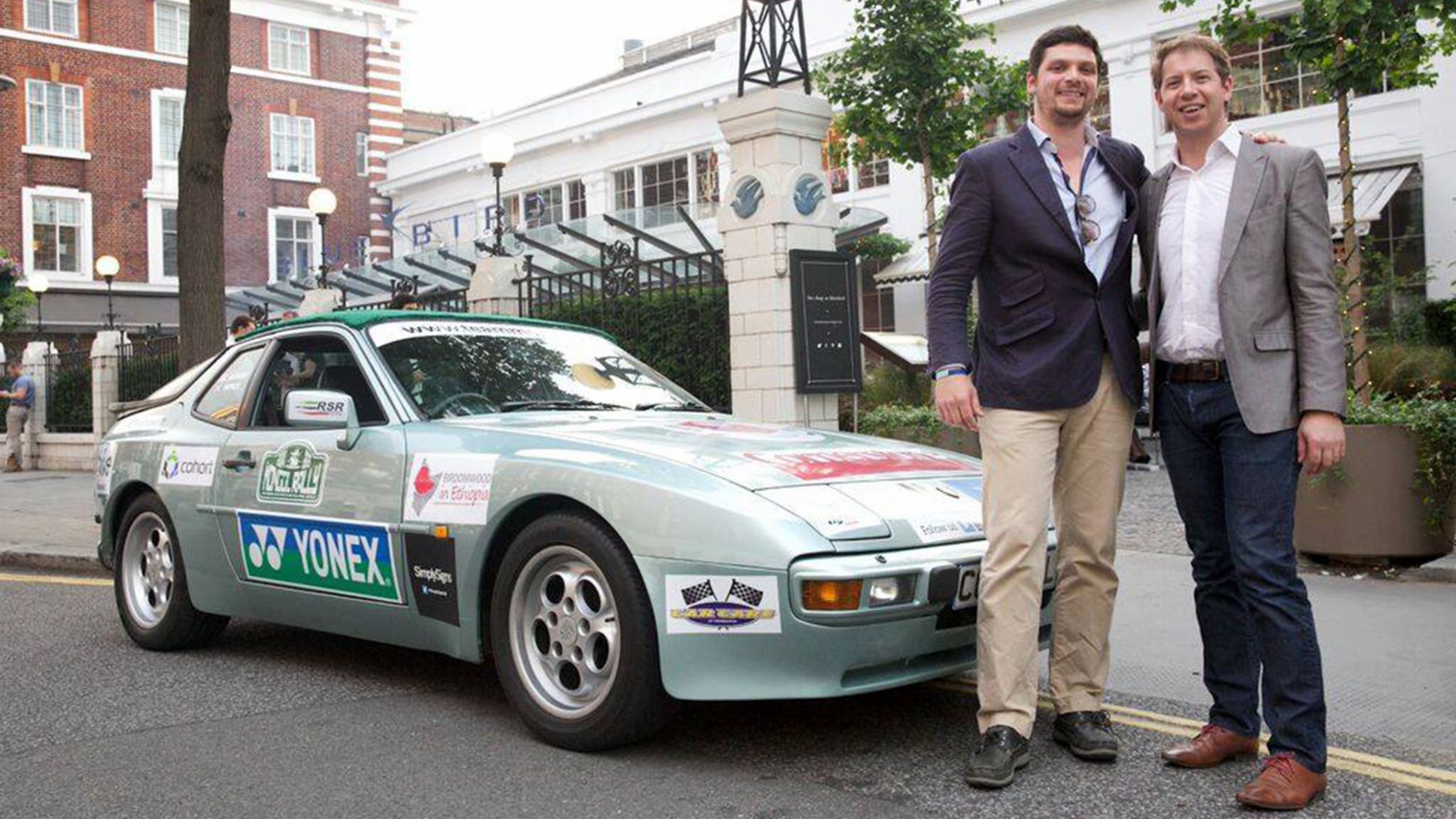 A different kind of rally

From England to Mongolia in a 29-year-old Porsche 944: Two Brits go looking for adventure while also supporting a good cause. On the second day of their trip, they decide to stop by Zuffenhausen.

Anthony and Patrick are a perfect team. The two Brits are full of energy and highly motivated when they arrive at the Porsche Museum on the second day of their adventure with a Porsche 944. They will need all that energy and motivation over the next six weeks during the Mongol Rally that will take them across mountains and deserts to faraway Mongolia.

Their extraordinary vehicle is a 29-year-old Porsche 944 that the two adventurers bought especially for the rally after conducting extensive research. "We looked at a lot of cars," says Patrick. "As soon as we saw this vintage Porsche, we both knew immediately that it would get us where we needed to go." Where they needed to go was Mongolia – 18,000 kilometres from England, where the adventure through 17 countries began.

The only Porsche in the field

The two Brits planned their route themselves and drew it on their rear-view mirror in the form of a map. The exterior of their vehicle is colourfully decorated with stickers from sponsors, as well as the name of their team. The two have also loaded up the car with all the supplies they will need over the next six weeks. "Not one of the other 249 teams is using a Porsche, which gives us a clear advantage", Patrick explains. "We know that a Porsche, with its typical Porsche quality, will never let us down."

The 944 is not exactly a traditional rally car, but the Mongol Rally is not a traditional rally either – it is all about motoring adventure, which is why SUVs and other off-road vehicles are not even allowed to participate. In this sense, the Porsche 944 appears to be the perfect rally companion. The adventure is also linked to a good cause, as all the teams participating in the Mongol Rally are donating money to a charitable organisation of their choice.

A clear vision in mind

Patrick's eyes light up as he explains how the two friends have always dreamed of taking part in such a rally. Their goal is clear: "Of course, we're doing this because we love a challenge and also because we're big fans of both Porsche and rallies", Patrick says. "But there's also a much more important reason, and that has to do with our personal connection to the St. George's charitable organisation in Ethiopia, to which we're going to make a large donation." Indeed, Anthony and Patrick's donation will make it possible to send at least 100 children to school next year.

The two adventurers made only minor modifications to their rally car, as the video below shows.

For example, they removed the rear-bench backrests to create extra space for luggage. They also installed a protective covering for the underside of the engine to prevent damage on rough stretches. However, the real highlight is the mini "teeing ground" they built on top of the Porsche's roof. And what on earth is that for? The answer is that the two Brits have thought out another special challenge for themselves.

As "Team Mongolf", they plan to play golf in every country they pass through during the rally. Sometimes this creates special challenges because there are no golf courses in some of the countries along the route – in Turkmenistan, for example. In those countries, the two friends will then simply climb up on the roof of the Porsche, drive some golf balls, and design a nine-hole golf course by themselves. They have taken all the equipment they need for this along with them.

What makes the two Porsche drivers Patrick and Anthony truly special, besides their passion for adventure, for a special "golf tour" and for their dedication to a good cause, is the simple fact that they are just two men who want to drive halfway around the world with their 29-year-old Porsche.

"You simply have to experience something like that one time in your life", Anthony calls out as the two climb into their 944 and get ready to roll. They are in a bit of a hurry, as they have to stick to a tight schedule. Now it is a little less than 18,000 kilometres to go, Anthony says with a smile as he starts the engine.

"Team Mongolf" is providing periodic updates of their rally progress and adventures at www.teammongolf.com, where anyone can also make a donation to St. George’s in Ethiopia.